Sjostrom Cruises Into Finals On Day 2 In Canet 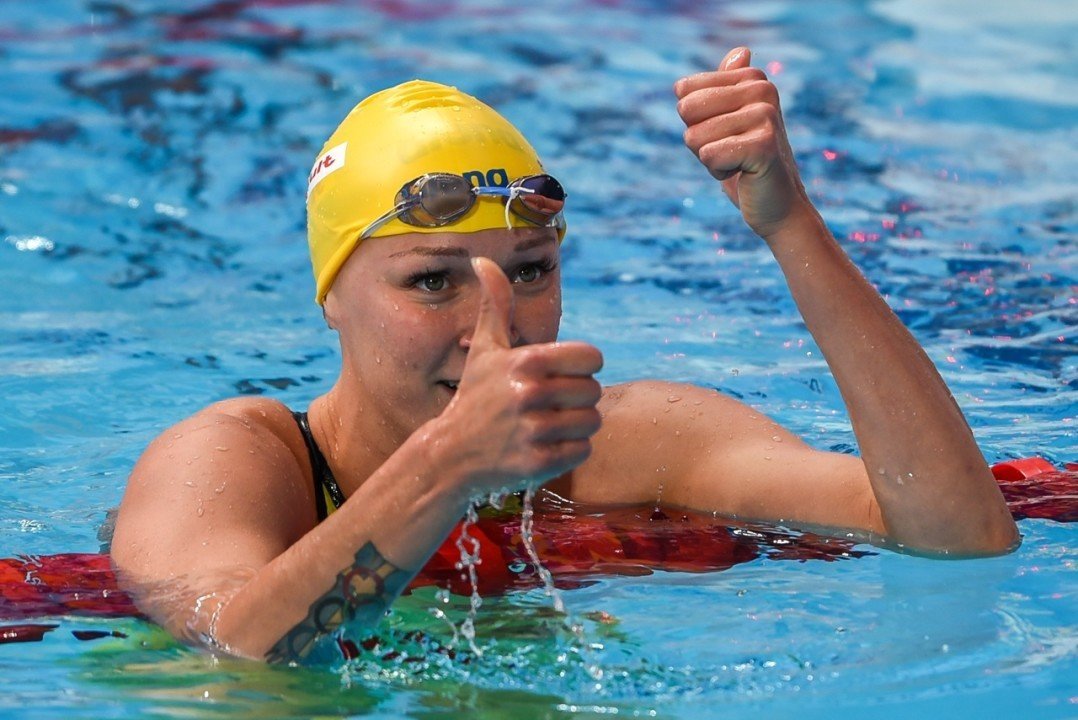 Sarah Sjostrom has been unstoppable on the Mare Nostrum tour. Archive photo via Peter Sukenik/www.petersukenik.com

Day 2 prelims at the third stop of the Mare Nostrum tour in Canet-en-Roussillon didn’t have any surprises, as Sweden’s Sarah Sjostrom continued to swim incredibly well taking the top seed in both the women’s 50 fly and 100 free.

However two events later Hosszu did come back to make the A-final in the 200 fly, qualifying 4th in 2:10.87 behind Suzuka Hasegawa (2:09.42) of Japan, Alys Thomas of Great Britain and her countrywoman Liliana Szilagyi.

On the men’s side, Brazilian Felipe Lima and Ukrainian Andriy Govorov threw down some fast 50s to take the top seeds in the men’s 50 breast and 50 fly respectively.

Australian Mitch Larkin, who will be defending his World Championship title later this summer, qualified 3rd overall in the 100 back in a time of 55.57. American Taylor Dale leads the pack at 54.73, and 200 specialist Radoslaw Kawecki of Poland is there for 2nd in 55.42.

However Le Clos will contest the 200 fly A-final, qualifying 5th overall in 1:59.74. Olympic bronze medalist Tamas Kenderesi of Hungary leads the field in 1:58.49, and his countryman Laszlo Cseh will also be there after a 3rd best 1:59.18.

The men’s 200 breast saw Olympic bronze medalist Anton Chupkov blitz the field to qualify well ahead in 2:10.99. Japan’s Yasuhiro Koseki will be his biggest threat tonight. He qualified 4th in 2:15.60.

Sjöström for a 51.8 in Budapest

I sometimes forget Campbell Sisters also participate in this series.

Her 52.28 couple days ago was already the second fastest in textile ever.

As SwimJon commented 3 days ago on another page: “Watching her race reminds me of Popov. The least hurried but the fastest. Even in the 50 she just…dives in and grabs a hold of the water and moves ahead and never looks sprintish. And the 100… well.. both SS and C1 (until Rio) have this calmness… the others are sprinting, SS just leaves them behind… very Popovish.” Can’t wait to see the video! (quoted comment from https://swimswam.com/2017-mare-nostrombarcelona-sjostrom-snares4fastest100freeever/)

These extra 0.03sec should have been done today. Who knows how she will feel in a month.

My jaw dropped to the floor.

Women’s 200 breast final coming up. New world record? I’m sure the swimming world would enjoy that! 😆