Shouts From The Stands: Why Feminists Should Be Excited About Stanford 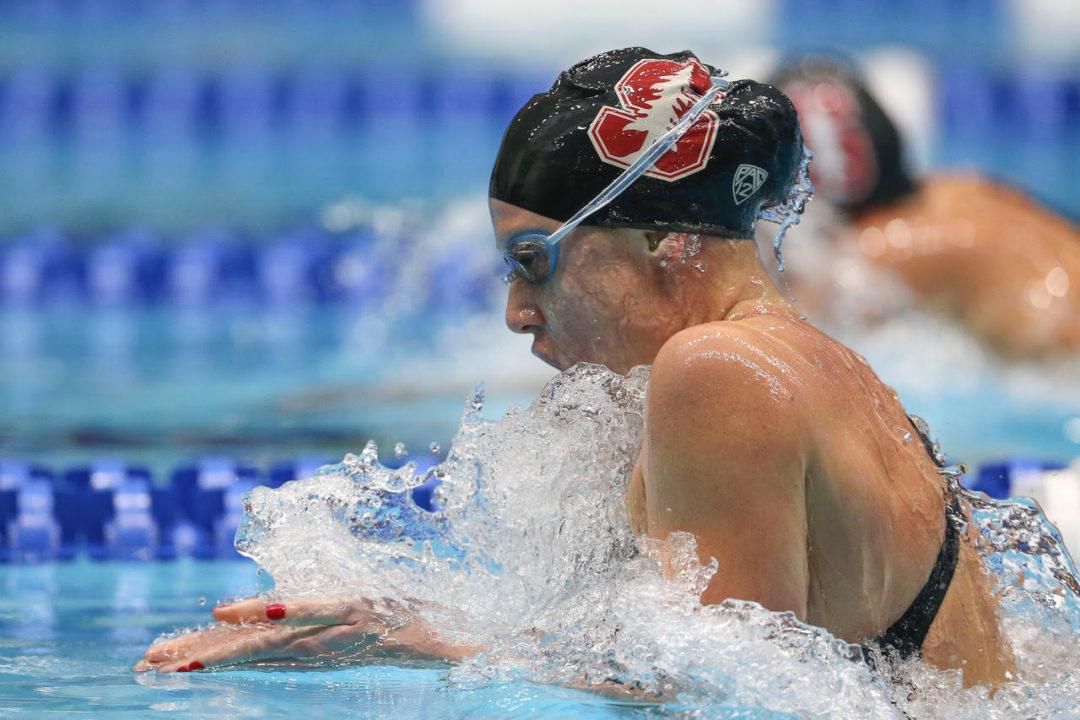 Stanford Women’s Swimming just accomplished their most successful season to date. They claimed this year’s D1 National Championship Title along with an undefeated season, coach of the year award, academic all American status, and a handful of American Records. Current photo via Tim Binning/TheSwimPictures.com

This “Shouts from the Stands” submission comes from Toni Armstrong:

I was a coach for USA Swimming for over 7 years and spent one year coaching college. I personally have felt the struggle of being a female coach in a male dominated career. I have been passed on for promotions for less qualified candidates based on my gender and marital status. I’ve even heard fellow coaches say things like “female coaches just want to be mommies” and “females cannot succeed without males to push them and keep them accountable.” It was negative experiences like these that inspired me to switch careers to Leadership Development.

Stanford Women’s Swimming just accomplished their most successful season to date. They claimed this year’s D1 National Championship Title along with an undefeated season, coach of the year award, academic all American status, and a handful of American Records. Last year, they birthed two new Olympians and won 8 Gold, 5 Silver, and 1 Bronze Olympic medals. Their recent resurgence of success is exciting to swim fans around the country, but should be exciting to non-swim fans as well. Their story from the past five years under Head Coach Greg Meehan and Associate Head Coach Tracy Slusser matters to the broader feminist movement and gains momentum with each person who knows it. Here are five reasons why Feminists should be excited about Stanford Women’s Swimming.

When Head Coach Greg Meehan was hired at Stanford in 2012, he knew Tracy Slusser was the coach to hire as his assistant. Slusser’s career before Stanford included positions at Arizona and Texas A&M, as well as a successful collegiate swimming career at Purdue University where she competed in The Division One NCAA. Meehan attempted to partner with Slusser earlier in their careers, and her pregnancy didn’t stop him from trying again.

Female swim coaches are often pigeonholed into age group (12 years and younger) coaching and expected to dial back their careers once they reach motherhood. Slusser coaching success over the past five years demonstrates why women should not be excluded from the opportunity to advance their career while simultaneously starting a family.

2. Slusser Proves that Motherhood and Career Success are not Mutually Exclusive

During Slusser’s first five years at Stanford, she gave birth to both of her children. Motherhood wasn’t a barrier to her career, but was part of the journey to success. She was promoted to Associate Head Coach after her second season—yes, the same years as the pregnancy and birth of her first child.

Slusser coaches in her own style and doesn’t try to overly masculinize her demeanor to fit into the male coaching stereotype (as many female coaches are pressured into from both their superiors and athletes). She doesn’t hide her role as mother or separate family and career; she embraces both of them as symbiotic pieces to her success. This is evident at the most elementary level through her coaching attire, which is professional yet feminine. Slusser proves that motherhood and femininity can be strong and successful in high achieving athletics.

3. Mentoring Female Coaches is the Norm

In 2015, Slusser spoke at the Women in Coaching Clinic whose mission is “to educate and empower coaches through developing support networks and facilitating dialogue.” Both Meehan and Slusser believe in the importance of female coaches and are actively involved in decreasing the gender gap in high-level athletics.

Stanford’s female swimmers pursue a slew of diverse majors and represent the growing percentages of females in male dominated careers including engineering, political science, and computer science. Ten out of the fourteen currently declared majors are STEM focused. Meehan and Slusser mentor athletes to know that there are no limits both in and out of the pool and that high-level athletics and high-level academics can be achieved simultaneously. Their swimmers are often given activities to reflect on personal strengths and are encouraged to discuss those assets with their teammates. Meehan and Slusser encourage athletes to know and own their assets, while supporting and respecting one another’s abilities. They have created a culture where competition is an opportunity to support one another’s growth, to forge new paths, and to break through superficial barriers, where struggle, emotions, and passion are symbols of strength regardless of your gender.

5. Meehan Demonstrates that Family and Work Balance is not Gender Specific

Feminism at it’s core is about gender equality. Women, men, and transgendered people strive for equal opportunities and respect in all of life’s roles inside and outside the home. Balance between career and family is a common struggle among all parents regardless of their gender. Claiming that gender inequality in high-level athletics is due to struggles with family work balance also suggests that male colleagues don’t value family. Stanford Women’s Swimming, and Stanford Athletics as a whole, is a very family friendly workplace. Seeing Slusser or Meehan’s children at the pool is a common occurrence—in fact their children and spouses were all in attendance at this year NCAA D1 Championships. Head Coach Meehan sets the tone on deck and in the office as welcoming. Both Meehan and Slusser’s families are involved in the team, which is a benefit to both their careers as coaches and as parents. They are tremendous role models to the women they coach, and demonstrate daily that both men and women can, and do, balance work and family.

My time at Stanford and around the Women’s Swimming and Diving Program makes me optimistic for the future of women and coaching. I hope that this story will educate men on the power of a gender balanced program as well as remind them that women are more than a ticking time bomb during their child bearing years. I also hope that it will inspire female coaches everywhere to stay in high-level athletics because being female and/or feminine is an asset. The glass ceiling has been broken; let’s make these five methods the norm.

When we check back in another 5 years & what this article notes is not the exception or exceptional, that will be great progress.

I hope this is like the nature of swimming records breaking barriers for others to aim toward. Stanford sets the rate. Let’s see who follows.

Toni, thank you for the insightful piece. I worked as the assistant (college swimming) coach for a female head coach and witnessed first hand the types of prejudices that you wrote about. It is so important for young women to have role models like Tracy. From listening to post-race interviews with the Stanford swimmers, you can hear how much they admire her and look up to her post in and out of the pool.

what can non feminist traditionalist women learn from Stanford?
That’s one analysis I would like to read.

What does non feminist traditionalist mean?

It means not feminist liberal?

You can’t define something by negatives.

“not feminist liberal”….. Are you saying feminist critiques are partisan issues? That there are no conservative feminisms? I smell a straw-man.

Read the title of the article

There is nothing in the title about any sort of partisan stripes or political affiliation. That is all your doing. Why dodge the question?

they can learn how to swim fast and win medals?

Can you elaborate as to why you don’t think the points enumerated in the article are applicable to non-feminist traditional women? It sounds a bit like you were put off by the word “feminist,” and didn’t really read the article. If you had, I don’t think you would be asking this question.

Nah I have no problem with the world feminist. I was just wondering about the non feminist women. Just saying

Good point. I think #2 is the only “issue” for those with more traditional values. I think the traditionalist gets a bad rap on this subject. I don’t think, in general, their point is that women should not work when then have a child. I think their points are 1) it is better for a parent to be at home with a child prior to school (dad or mom)–this is not to say a child cannot develop into a great person if they were put into daycare at a very early age–just that they think it is better to have them at home with a parent, and 2) they get upset when feminists demean them for stopping their career and… Read more »

Never had kids and more of a conservative on defense and law and order issues. If you want a good person on your issue its the eastern orthodox lady Fredrickia Green that is good on the stay at home issue but does a lot of things like write books and helps her husband who is an antoichian priest

Again, you obviously didn’t read the article, which has absolutely nothing to do with the kind of liberal feminism you are referring to.

I definitely read it and was simply responding to the comments.