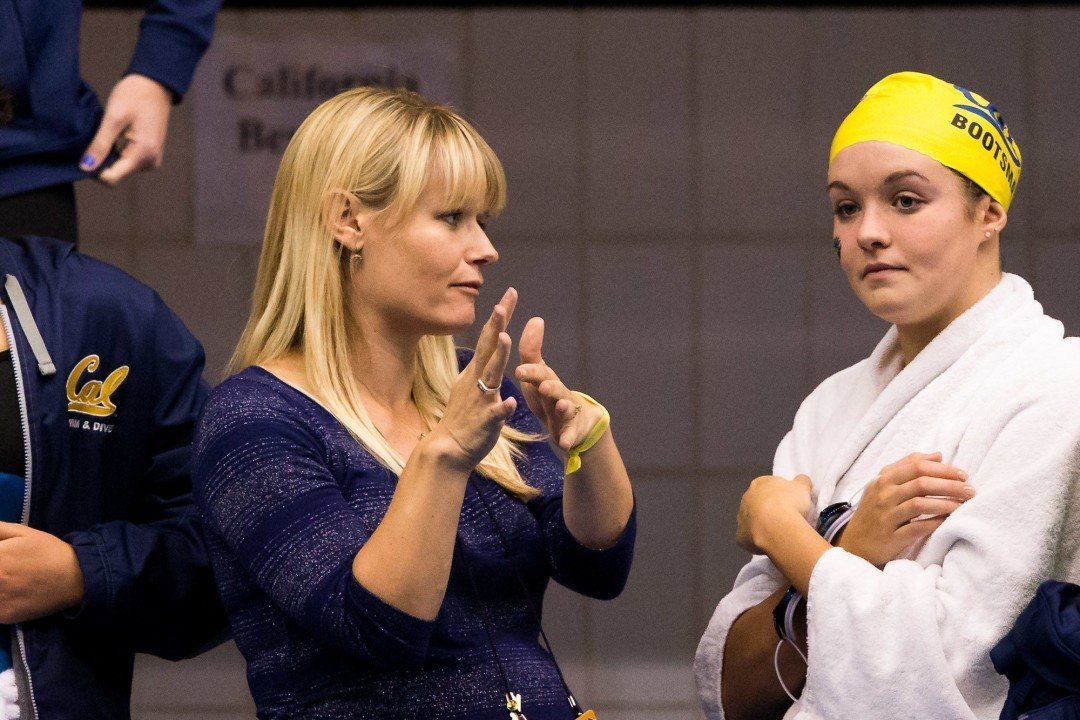 Kristen Cunnane (left) has been a full-time assistant at Cal for 8 years, including serving as recruiting coordinator for some of the best classes in NCAA history. Archive photo via Tim Binning/TheSwimPictures.com

Cal women’s associate head coach Kristen Cunnane has resigned her post and will step away from coaching, she told SwimSwam on Saturday.

“After 10 incredible years at CAL, I have decided to step down from my role,” Cunnane said. “Coaching at this level and being able to give the CAL program and girls what they deserve, along with being able to give my family and children what they need, proved to be too difficult for me.”

“I am deeply sad about my decision, but know it is the right one for me. There are a million things I will miss about my job- most of which the awesome girls and staff at CAL. Coaching is my passion and I hope to coach in some capacity in the future. I am endlessly grateful for my time at CAL and the many people who have profoundly touched my life.”

Cunnane was a full-time assistant coach for Cal for 8 seasons, and was promoted to associate head coach in December of 2011.

Among her efforts was acting as Cal’s recruiting coordinator throughout Cal’s run to the top of collegiate swimming. She was with the program for all four of the program’s NCAA team titles (2009, 2011, 2012, 2015) and coordinated the recruiting of some of the greatest recruiting class that the NCAA has ever seen.

The combination of being the owners of the NCAA Championship next season, along with the promise of working under the 2012 U.S. Olympic Team head coach Teri McKeever, will make this the most prized assistant job available this summer.

As an athlete, Cunnane (then Kristen Lewis) was a UCLA All-American, after which she moved to Cal to earn a master’s degree. She served one year as a graduate assistant at Cal, and two years as an administrative assistant. She has also served as the director of the Cal swim camp.

Cunnane gave birth to her second child, a son, on May 12th of this year. She also has a two-year old daughter.

Kristen I just saw the interview on ID you know forgiveness is not for the other person forgiveness is for us I really hope that you will come to a place that you can forgive because it really is just for you.

Are there still people out there who resent Cal’s program and Teri McKeever for not accepting the traditional wisdom that long yardage workouts are the key to success? Natalie Coughlin is proof positive that other methods work, too, and there is “no one size fits all” in swimming anymore than there is in other sports. That Coughlin is still swimming well and enjoying the sport speaks volumes for the value of not overtraining, which has led many other elite swimmers to burn out much earlier in their lives.

I guess I should not be surprised that there are a lot of contrary posts here even when the posts are positive for Kristen and her family. I would wager that the negative posts are primarily from those on this board who want to hit Cal’s program successes.

Do not remember reading Georgia getting hammered (as Cal has) after winning 2 or 3 NCAA Championships.

I see the beginning of more and more colleges improve in Women recruiting classes, and I hold that is good in many ways for college swimming.

Kristen Cunnane is a class act and will be missed. It is never easy leaving athletes you care deeply for. Being home with your children is such a wonderful gift. The Golden Bears will miss you but you will always be part of the family. Teri will rise to the occasion and the team is better because of you. Best Wishes to Coach Cunnane and her beautiful family.

Once a bear, always a bear. Best of luck Kristen and thank you for all you have done for the program! We will miss you!!

Kristen hit it right on with this quote: “Coaching at this level and being able to give the CAL program and girls what they deserve, along with being able to give my family and children what they need, proved to be too difficult for me.” Recruiting, traveling, home visits, meets, recruiting phone calls, practices, etc. At some point a mom has to make a decision to sacrifice one part, coaching or being a mom. Neither is right or wrong, it depends on what the individual wants for their own familiy. I believe it is not possible to completely give emotionally and physically to both being a mom and coaching at the major Division I level. Why do you think we… Read more »

All is not as happy as it is suppose to be at that program. Missy is not coming back to train with the program, Cierra did not stay for the summer to train with the “elites” and now Kristin is retiring…hmmmm…..

Missy planned to train in college for 2 years before she even picked a school. Swimmers don’t always train summers with their college teams. Kristin has two small children and is choosing to step down so she has more time to parent. I fully relate as I stepped down from a head coaching position that almost led me into college coaching 15 years ago so that I could raise my kids. It happens.

You are clearly trying to sit up drama where there is none. Missy made it clear before she ever got there that she was only swimming 2 years, Runge comes from NBAC and I don’t know of a top swimmer from Bownan’s group who didn’t return for the summer, and Cunnane is a mom with infant children.

Bootsma should be looking at her while she is talking to her.

That is a little judgmental considering it is a still photo and you have no idea of the context of the conversation. Maybe Teri is making faces at her just out of the picture.

To me, other things happening nearby shouldn’t matter. The coach is obviously explaining something to her and she has a look like, as the kids say these days, Whatever. She should at least look like she’s paying attention. Maybe that is the way she always looks when she pays attention, but it looks odd to me.