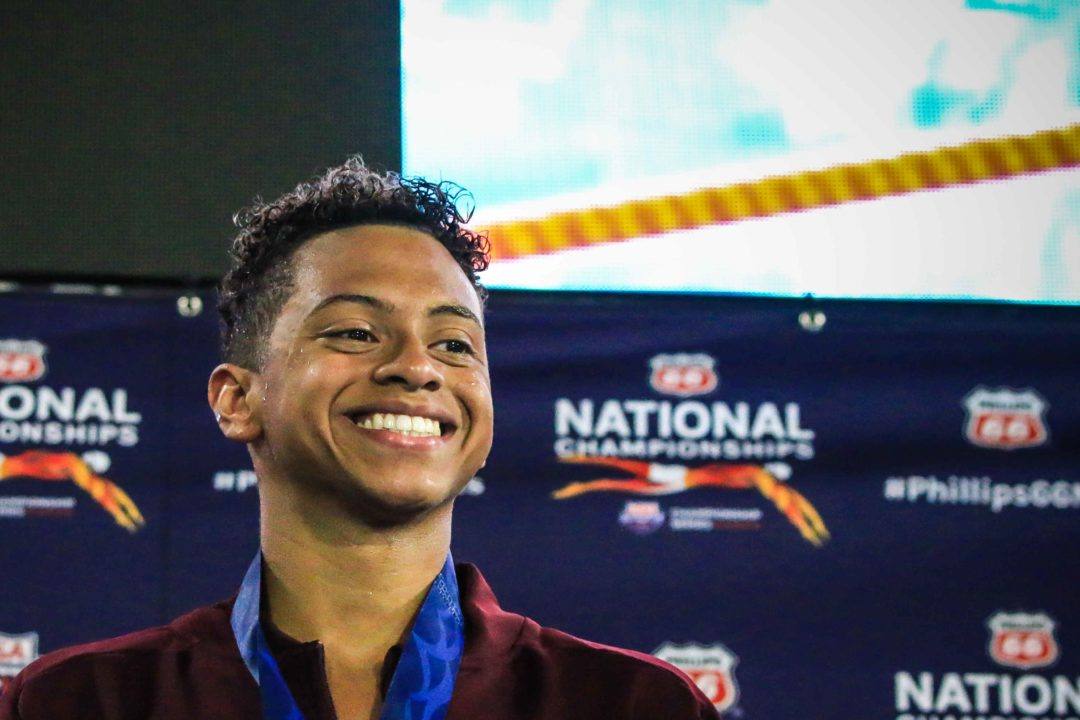 Casas took over four seconds off of his PR in the 200 IM and several hundredths off of his 50 free PR. Archive photo via Jack Spitser

Day 1 of the Art Adamson Invitational has gotten underway, as prelims of the 500 free, 200 IM, and 50 free were held this morning in College Station. A big story from the session was the Texas A&M freshmen going best times left and right, including a couple of lights-out swims from Shaine Casas.

On the men’s side, several Aggie first-years (and a transfer) chopped huge time off of personal bests. Topping the field this morning was freshman Mark Schnippenkoetter at 4:20.70. His old best was a 4:30.72, so he just lopped 10 seconds off of a best time from just this March. Luke Stuart, another freshman, was 4:21.36 to clip almost five seconds off of his old best to take 2nd this morning. Then, Mark Theall, a transfer from UNLV, was 4:22.55 to take over thirty seconds off of his PR. The old best was from 2016, exactly two years and a day ago, but not at a championship meet.

Sydney Pickrem posted a field-best 1:54.70, unsurprisingly taking the top spot by a significant margin this morning. That will undoubtedly mark an invited time for the senior. Lisa Bratton, who has since graduated but is training with the Aggie pro group, was 1:57.64 just ahead of A&M senior Monika Gonzalez (1:57.91). Aggie first-year Caroline Theil was 1:59.45 for fourth, her first time under 2:00 and a best by nearly a full second.

Only three swimmers broke 22.8 in the women’s 50 free this morning, led by Texas A&M post-grad Sarah Gibson at 22.30. 2nd went to LSU’s Haylee Knight at 22.38, while A&M junior Raena Eldridge was the only current Aggie under 23.0 at 22.59. Eldridge looks to be the team leader in the 50 free this year, and development from her will be huge as A&M tries to handle the graduation of All-American sprinter Beryl Gastaldello.

A&M looks really dangerous if they can continue to improve over the season. Casas is a stud and makes up for Bonetti’s graduation, Schnippenkoetter has the best name in college swimming, and even though that 50 free wasn’t a best time for Bobo, it’s still his first time sub-20 since 2016, and he swam the 200 IM before it. They have a deep stable of sprinters (even deeper now than I originally expected with Theall in the fold), lots of flexibility in fly/back, and if Walker keeps swimming the way he has this year, they may not even have a big step down in the breaststroke from Castillo Luna last year. They… Read more »

Lot’s of positives for the A&M men for sure. With the addition of Theall (1:36 last year at UNLV) Bobo, Bratanov (both 1:37 in HS) and possibly even Casas who can swim anything to Martinez, Richardson (both 1:35 high last year) and Koster (1:38 earlier this year at Ohio State meet, 1:36 low split at SECs last year) they should be capable of putting together a very strong 800 free relay come February/March.

1anda2 – normally I would say that they wouldn’t aim at using Bobo or Casas on the 800 free relay…but A&M has a long history of scratching guys from individuals and doing 5 relays instead, so definite possibility.

I don’t think Bobo will be in 5 relays though – you have to guess that at very least Koster will be the 200 medley relay anchor, right?

And I feel like with the number of events Casas is really good at, it would be a shame to limit him to only 2 individuals…

But, I remember there being some head-scratchers in the past. Perhaps the philosophy has changed.

Some things open up if Kim is what he was last year (or better). He has had some downright slow results this fall, I’m wondering if he’s coming back from an injury. 1:49 IM this morning is encouraging.

Agree on Casas, I could see him being left off the 800 if only because he seems to have the biggest upside for individual scoring potential in multiple events. The bigger thing I see is they have more parts to play with that may not necessitate using someone on 5 relays like in the past. Heck, Schnippenkoetter’s drop in the 500 should make his 200 tomorrow pretty interesting to watch as well.

Have you or anyone already put out the “Invited” times from 2018? I think the title was “Actual Qual Times for NCAA” and you for sure did it for 2017.

We did put out an article about qualifying for the coming 2019 NCAA Championships here (https://swimswam.com/what-does-it-take-to-qualify-for-the-ncaa-championships/) if you want to see the 2018 invited times, which are listed in a table there.

The thing is… it took a 1:34 average to score at NCAAs last year. They don’t currently have even one person that can get to that at the moment. You can kind of start to see the shape of a relay with the guys you listed if you squint a bit, but it isn’t there quite yet.

True. We’ll see what they put of tomorrow in the 2 free.