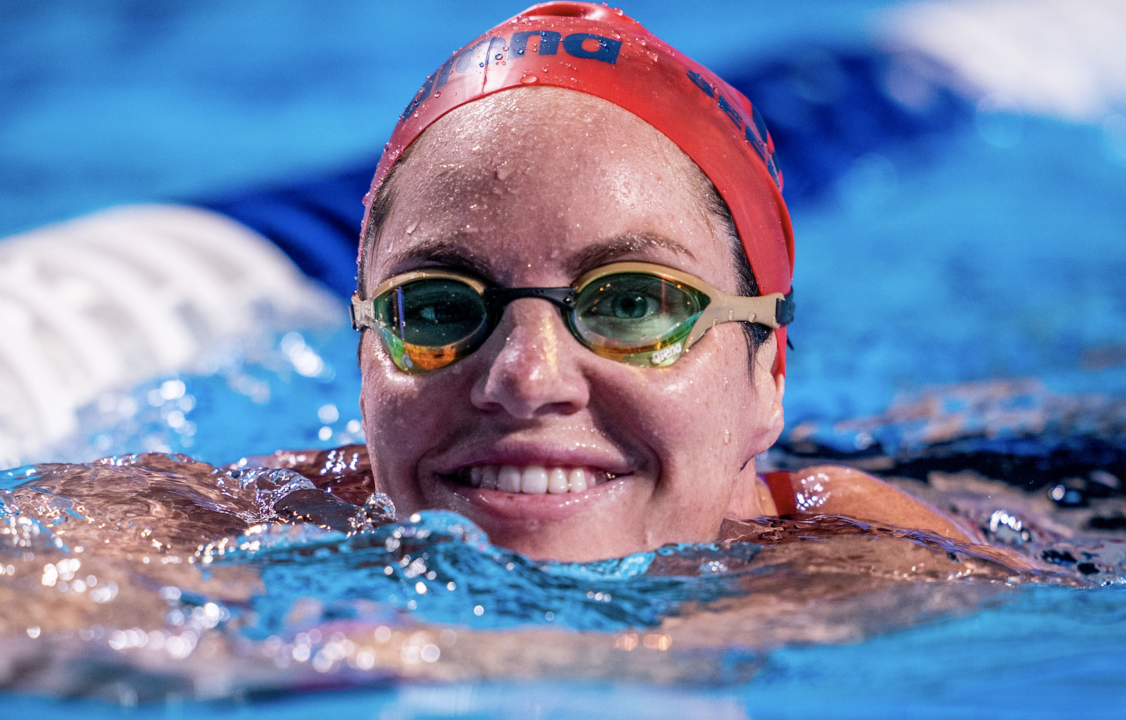 On the national team for fifteen years, Australian backstroking ace Emily Seebohm has qualified for her fourth Olympic Games. Archive photo via Mine Kasapoglu for ISL

Although yesterday we saw two Australian national records get lowered, today brought a new World Record at these Australian Olympic Trials, with Kaylee McKeown firing off a mighty 57.45 in the women’s 100m backstroke. You can read more about her phenomenal performance here.

Somewhat quietly coming in second place and also making the squad for Tokyo was 29-year-old Emily Seebohm. Checking in with a solid effort of 58.59, Seebohm, too, dipped under the Swimming Australia-mandated qualification time of 59.71. In doing so, the racing stalwart qualified for a remarkable fourth Olympic Games.

Going back to Beijing in 2008, a young Seebohm placed 9th overall in the 100m backstroke but also helped the Aussies snag medley relay gold.  Four years later in London, the backstroke ace set a new Olympic record in the 1back early rounds before settling for silver behind American Missy Franklin when it came to the final race.

Then in Rio, Seebohm raced in both the 100m and 200m backstroke events, placing 7th and 12th respectively, but earned medley relay silver.

Within those spans of time, Seebohm was a mainstay on the FINA World Cup circuit, took Australia’s only individual gold at the 2017 FINA World Championships, as well as competed as a member of Energy Standard in the International Swimming League. Along the way, Seebohm has also conquered health issues both internally and externally.

In 2015 Seebohm suffered knee damage in a horseriding incident and also revealed her endometriosis diagnosis and subsequent treatment in 2017. Most recently, the icon spoke about her battle with eating disorders.

But Seebohm has also had a lot to handle in the pool, with younger stars McKeown and Minna Atherton rising through the ranks. McKeown we’ve already mentioned, but Atherton was another one some thought could have taken the 2nd spot tonight for Tokyo.

As a member of London Roar in the ISL, Atherton took down the short course meters 100 backstroke World Record and while representing Australia in Gwangju also claimed 100m back silver at the 2019 FINA World Championships. In fact, Seebohm and Atherton were training partners under Coach David Lush before he and Atherton moved to Moreton Bay and Seebohm switched to Griffith University.

Seebohm still has the 200m backstroke on the agenda for these Trials but the fact that she already claimed one spot on her 4th Olympic Games roster is something to be commended.

And her time was fast … top 6 in the world this season I think. Looking like she could get back down to her PB of 58:23 which will put her in medal contention. I know Olympic finals are rarely fast, but it seems like it will take sub 58:50 to make the final and I’d expect under 58 to win a medal.

This is going to sound stupid, but I did not realize that she is already 29 years old (time flies).