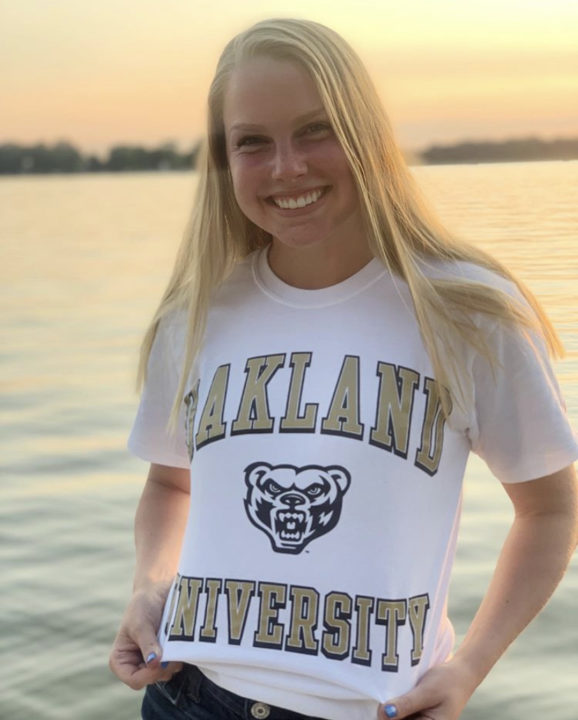 DeWitt senior Jordyn Shipps, an Oakland recruit, took the 100 free with a 50.80, touching first by over a second. Stock photo via Ian Townsend

Seaholm High School won the MHSAA DII girls state title this past weekend, capping the meet with a win in the 400 free relay, sealing the victory against Rochester Adams.

DeWitt senior Jordyn Shipps, an Oakland recruit, took the 100 free with a 50.80, touching first by over a second. The swims marks a gigantic personal best for Shipps, whose previous best was 52.21. Shipps also won the 200 IM, clocking a 2:02.50, which was also good to win by over a second. That swim also marked a huge best for Shipps, coming in way under her previous mark of 2:08.19.

Fenton HS junior Gracie Olsen won the 100 fly, posting a 55.18 to win by over a second. Dexter sophomore Lily Witte won diving decisively with a score of 486.95.

Some context when looking at results:

I think it’s important to note that all 3 MHSAA meets were postponed in November, the week of the meet. The postponment was the result of the State Health Department placing some restrictions on the State, which included no organized sports. These swimmers were thus unable to practice from November 18 to January 4th. They then had just 13 days to train after being off since November 18th.

All looks at times should take that into consideration. Not to mention, the fact that due to social distancing needs, the meets were held as timed finals instead of p/f. PLUS, teams were assigned warm-up periods which began at 11am, whereas the meet didn’t begin until… Read more »

Major kudos to all of the Michigan parents, coaches and athletes who got through this extremely challenging swim and dive season and even managed to have some fun last weekend. The grit, determination and resilience these girls have had to tap into since last March will serve them well in college and for the rest of their lives.