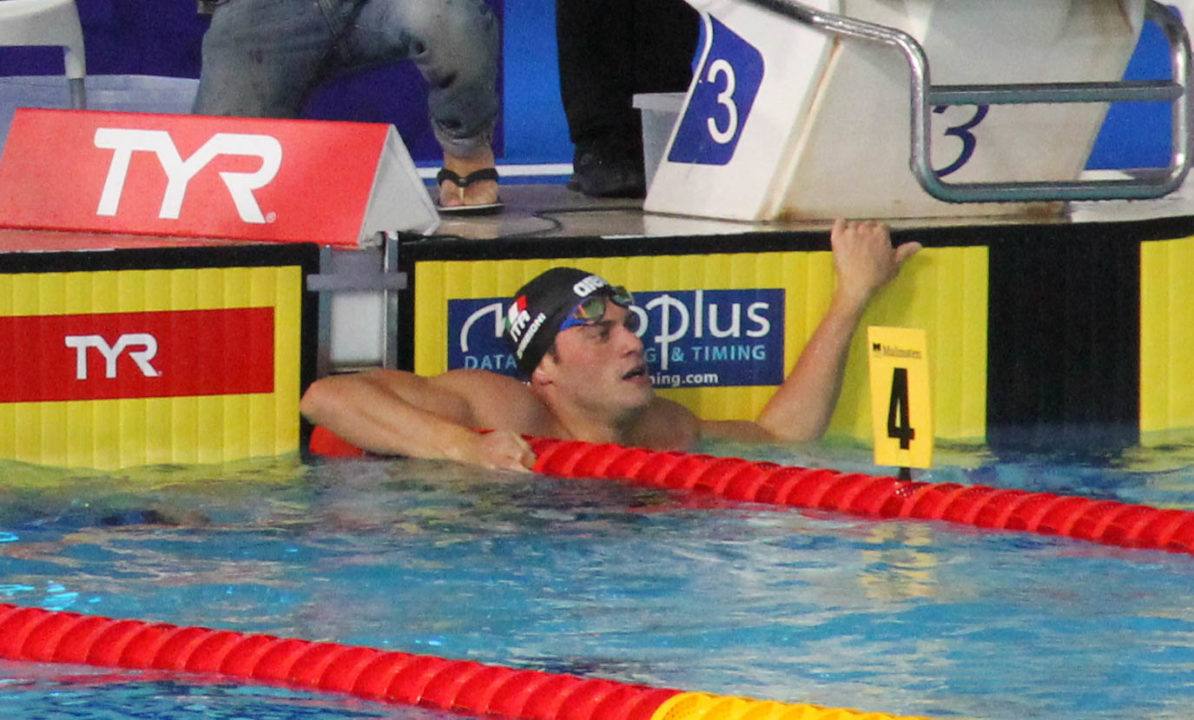 Sabbioni ended up restarting his race twice before eventually qualifying for the semi-finals of the men's 100 back Monday in Gwangju. Archive photo via Giusy Cisale

Throughout the heats of the women’s and men’s 100 back prelim races Monday in Gwangju, it became clear that a number of swimmers were struggling with the backstroke wedge system.

Multiple heats saw the field stand down as officials tended to swimmers who had difficulties with the wedge. All seemed to go smoothly until the final heat of the men’s race, when Italy’s Simone Sabbioni stopped after the start due to an issue with his wedge. The rest of the heat completed their race.

Sabbioni was granted a solo re-swim and moved from lane six to lane five. But in his second attempt, the same thing happened: something appeared to go wrong with the wedge and he again stopped before he could accelerate off the wall at all. Sabbione’s backstroke start position is notably more horizontal than we typically see; he sticks his lower back out fairly far while keeping his head in toward the block.

In the video below, however, there appears to be a clear issue with the wedge mechanism–– you can see the straps holding the wedge give out entirely at the :50 mark:

The 22-year-old was again granted another attempt and ended up going 53.85 to qualify 13th for the semi-final.

“I was very focused on making a good start, then when I saw the device come off I said ‘what now?'” Sabbioni said after the race. “The second time it came off I only focused on the fact that I was worried if it came off again. The device also caused problems in the other heats but I’m still very happy that he managed to get into the semifinals.”

What was the brand?

Thanks. I wasn’t sure if it was too deep of a cut. Was also considering making a fyre festival joke

Save the fyre fest joke to the ISL

Does anyone think his start is the issue? It looks like he’s putting too much downward force on the wedge, and not pushing backward on the pad & wedge together.

He is using the wedge to start as opposed to it being used to avoid a slip. All of his weight is on the wedge.

That doesn’t make it not an equipment failure, but it isn’t really the purpose of the wedge either.

I never said it wasn’t legal.