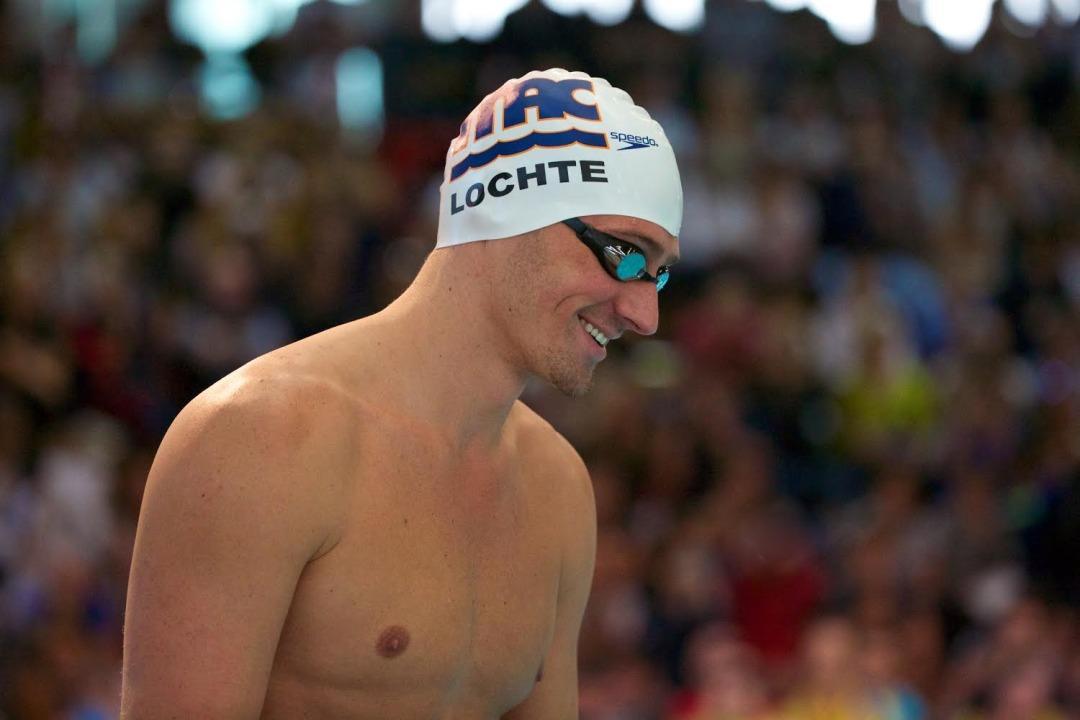 Ryan Lochte put on a very special performance for all those in attendance at the 2015 Long Course Speedo Sectionals in Athens, GA; staying underwater for the entirety of his 50m freestyle and taking the disqualification. Archive photo via courtesy of rafael domeyko, rafaeldomeyko.com

Ryan Lochte put on a very special performance for all those in attendance at the 2015 Long Course Speedo Sectionals in Athens, GA,  staying underwater for the entirety of his 50m freestyle and taking the disqualification.

Although he was disqualified for passing the 15-meter mark underwater, Lochte managed to stop the clock at 23.49, a time which was even faster than his prelim time of 23.55 where he swam full stroke freestyle.

Lochte has challenged himself to swim a 50 of underwater kicking before. The video below which was uploaded to youtube two years ago shows Lochte swimming a 50 yard dolphin kick on his back in 20.8.

In this video, Lochte is shown swimming a 50m dolphin kick on his back, and clocking in at 25.0. This video was uploaded to youtube in February of 2012, just a few months after Lochte dominated the 2011 World Championships in Shanghai, China.

The fastest 50m fly kick that we could find record of was a 23.10 done by Hill Taylor with a full body suit. The video of Taylor’s performance can be found below.

All of the videos above show swimmers performing the task on their backs, however Thursday night Lochte completed the 50 on his front with a dive.

I don’t want to poo-poo the fun in this…but we lost a 12 year old kid to shallow water blackout when he tried to do a 50m underwater. Lots of kids watch Ryan… so wish he’d consider his influence.

And lots of kids could try his strongman training and destroy their skeletal structure. Or die of exhaustion or rhabsomyalysis whilst trying out one of his workouts under Gregg troy. Because elite athletes can do things that aren’t inherently safe for the average human. Let Ryan swim.

You know that pro sprinters swim the 50 free no breath, right? And 30m of that is allowed to be underwater in short course, essentially how shields swims it.

Where the hell was the lifeguard?

My thoughts exactly. We are trying to bring awareness to shallow water blackout and these stunts just make kida

My thoughts exactly. We are trying to bring awareness to shallow water blackout and these stunts just make kids want to do it.
I know of two swimmers both attempting this that passed out. One last his life. The other was actually on the 2000 Olympic Team. Showing it can happen to ANYONE! I think we need to stop praising this

They are olympic swimmers who o elite hardcore training. So if they want to do it it is completely their choice. Te kids that blacked out from attempting it were at fault, not thw professional swimmers. They should have came uo for air but they continued anyways. So it was only their fault for trying things that they knew they couldn’t accomplish.

Sorry Ninja, I disagree. Top swimmers are copied by others. Telling the parents of an 11 year old who attempts this and has shallow water blackout and dies that it was “their own fault” is not on. If Ryan and other top swimmers want to do these stunts then they can do them on their own no need to do it in finals. Just a stunt. After all Bob Bowman and Phelps are trying to bring awareness to SWB this undermines their efforts. If you deliberately break the rules you should be penalized or fined not just DQ. The rules previous to the 15m underwater rule allowed this sort of swimming. Ask Dave Berkoff and Olympic 100m champion Daichi Suzuki… Read more »