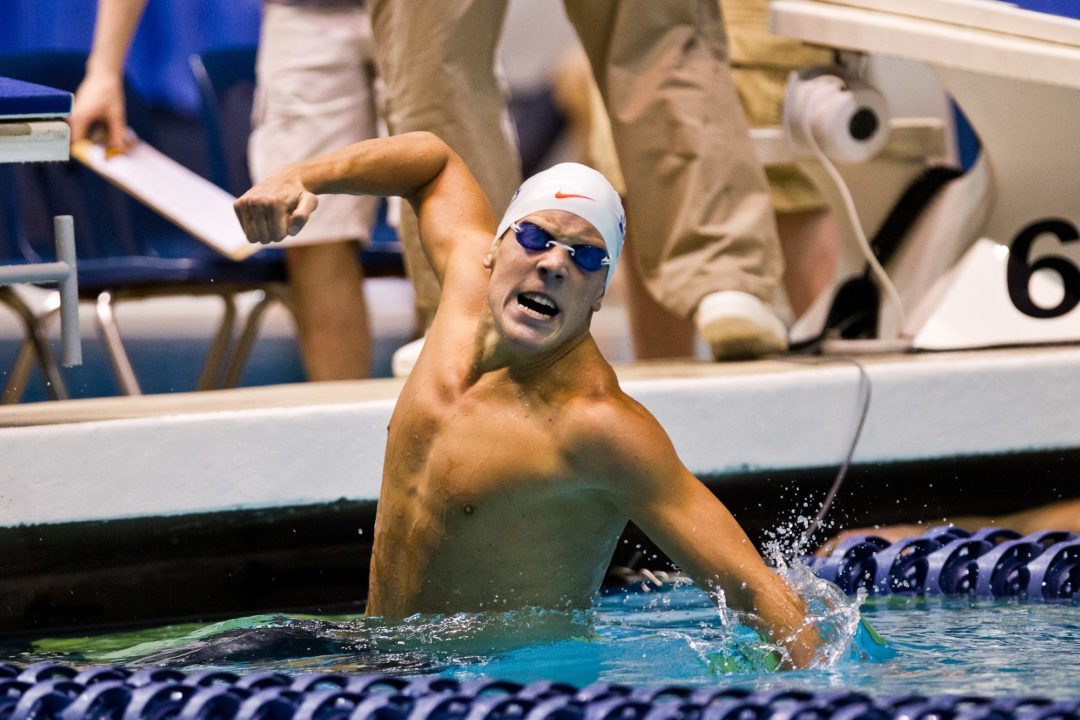 LSU AD Scott Woodward has reportedly focused on top assistants at some of the best programs in the country to find his next swimming head coach... Archive photo via Tim Binning/TheSwimPictures.com

Reports from around the country are that the LSU Tigers are pursuing assistants from some of the top collegiate programs in the country to fill their vacant head swimming & diving coaching position.

Without a strong base of alumni within the collegiate coaching ranks, like we’ve seen in other openings, like the one at conference rivals Auburn, the LSU job is a more wide-open proposition. The job came open two weeks ago when Dave Geyer, who had been with the program for 16 years, including 11 as head coach, resigned.

Of that group, the one with the strongest LSU ties is Chitwood, who spent the 2012-2013 season as an assistant at LSU – his first full-time collegiate coaching job.

Current LSU athletics director Scott Woodward is an LSU alumnus, but was not at LSU during Chitwood’s prior stop there. At the time, he was serving as the athletics director at the University of Washington, where he was responsible for cutting the men’s and women’s swimming & diving programs.

Update: One more name that has had talks with LSU is Ron Aitken, who is currently the head coach of the Sandpipers of Nevada swim club in Las Vegas. That program, which focuses mostly on 18 & under athletes, is one of a handful of clubs recognized as a Gold Medal Club nationally. The program produces multiple NCAA Division I athletes every year. He has coached with the Sandpipers since 1994 and also is the head coach of state power high school Bishop Gorman. A 1992 graduate of UNLV, Aitken doesn’t have any college coaching experience.

Woodward has been pitching around the country that he’s ready to spend to bring in a coach who will improve the level of the program. The former head coach Geyer had a base salary of $115,000 for the 2019-2020 fiscal year. That spending, though, is not expected to include a new pool. While LSU has an 8-lane, 50 meter indoor pool with a separate diving well, though it doesn’t have the same sense of scale or flash as some top programs in the conference like Georgia, Texas A&M, or Auburn.

According to USA Today, LSU ranked 10th in the NCAA in the 2018-2019 school year in revenue, pulling in almost $158 million. That came out to almost $9 million in profits.

Well, we all know what the outcome is now, don’t we? And he wasn’t even on the radar.

Why not pursue Power 5 head coaches with connections to the LSU program? Matt Leach has seen pretty good success his first few years at Washington State, PAC12 Champion and NCAA qualifiers. Phenomenal coach and great human being- could be someone to look at. Spent time as a GA and assistant at LSU from 2004-2009!

The pool really needs to be part of the equation. Without that, recruiting is going to be difficult. There are many high schools that have better facilities. Not sure you can get a quality coach if you handcuff them.

If this rumor is true,LSU should strongly consider Ron Aitken.
This organization supposedly is a knowledgeable training power-house on par and superseding many college programs.
Consistently producing national & international swimmers under the age of 18 who would score, or have the potential to score at conference & NCCA’s
Have to think Aitken would make an impact in the SEC within a short time. Choose wisely LSU.

I don’t know Ron, but seems he is very distance oriented with most of their success in those events?!? Will that approach work in SEC and NCAA?

@BradenKeith What are your thoughts on Steve Mellor for head coach?

I think he’d make a great head coach one day, either now or down the road.

The temperature at LSU leads me to believe that it’s unlikely they’ll promote him.

No way lsu only made 9 million in profit

All the costs/perks/fluff and still big money leftover

i do not think that they want to make profit, as they are not a for-profit university, that is why they spend so much

UNCW is his alma mater. I think if he were looking for a Power 5 head coaching job, he wouldn’t have left NC State when he did.

Peter Verhoef at Bolles. He has gotten them turned around quickly, built a pool, and has experience with high performance from his time working for Marsh and his own career.

But has he taken Bolles to another level?