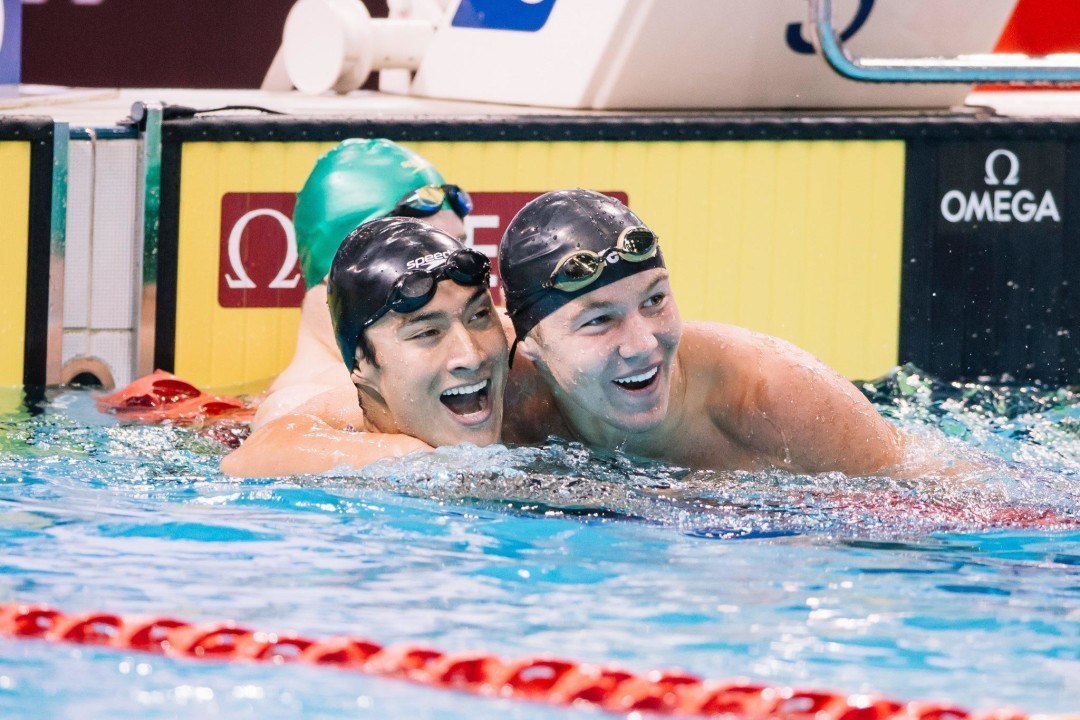 The American men closed night 4 of the 2015 FINA Junior World Championships with a bang, smashing the junior world record in the 4×200 free relay.

Team USA were the heavy gold medal favorites after Maxime Rooney and Grant Shoults went 1-2 in the individual 200 free on day 2, and the team lived up to its billing.

The Americans crushed the 2013 time from Great Britain, thanks in large part to Rooney’s huge 1:46.55 split and Shoults’ career-best 1:48.10 leadoff leg. Here’s a comparison of the splits between the two relays:

That British relay includes 2015 world champ in the 200 free James Guy, who split just a few tenths faster than what Rooney split for the United States. Guy was also on the British world championship 4×200 free relay a few weeks ago.

Rooney’s excellent split actually would have made the U.S. relay at Worlds, a team that won silver. Rooney would have been the third-best split on that relay behind Ryan Lochte and Conor Dwyer.

Shoults was three tenths faster leading off than he was in winning silver individually, and gave the team a 2.7-second cushion over the junior world record from the get-go. Meanwhile, both Grieshop and House bettered their best 200 free times on the closing legs. House was three tenths better than his 1:49.53 from U.S. Nationals, and Grieshop obliterated his previous best of 1:52.09 from last summer’s Junior Pan Pacs.

All that aside, great swims!

I think the Russians used to put Popov 2nd pretty often on the 4×100 free relay. I think the idea is to give your fastest the first opportunity to go with a flying start, and get some clear water for the weaker legs.

Add MP, Lochte and Dwyer and you’ll have a pretty good US relay in Rio.

Add to Rooney of course. 🙂

You got some flack for calling this a few months back but I think many more will now agree with your forecast :^)

Race video at 49 minutes in the video and medal ceremony at 1h11
I know it’s better than nothing but come on FINA, we are in 2015, the quality of streaming is pathetic.
https://www.youtube.com/watch?v=W8cYy746zcw

The video quality and the camera work are awful. Worst I’ve seen in years.

FINA doesn’t have much money! 😆