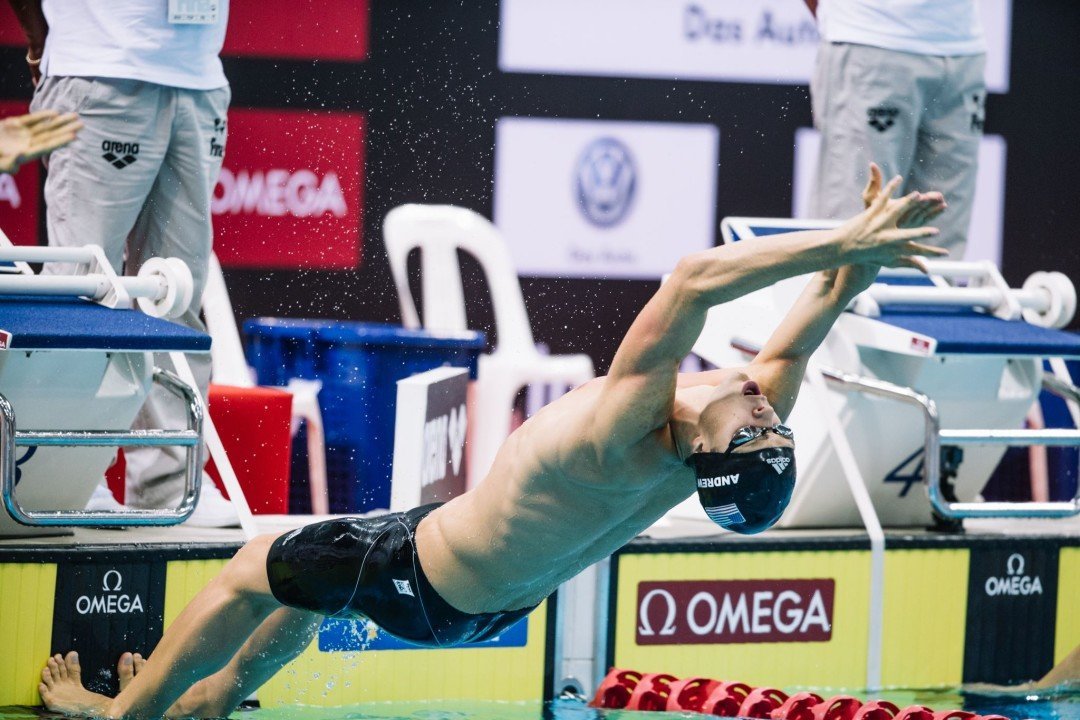 After an incredible six days of competition in Singapore, where we’ve witnessed some incredible performances from the next generation of swim stars, FINA has named their male and female swimmers of the meet.

Michael Andrew of the United States and Viktoriya Gunes of Turkey were announced the winners, after both putting on incredible displays in the pool. Andrew and Gunes each won as a result of putting up the most total rankings points on the male and female side. Points were awarded for placing in each event, with bonus points awarded for junior world records. Gunes scored 24 with Australian Minna Atherton following closely with 21. On the men’s side, Andrew scored 13 with Russian Anton Chupkov breathing down his neck at 12.

Andrew, who may have bit off more than he could chew event wise this week, still performed admirably under such pressure and stress. In total Andrew competed in 8 individual events this past week, making it to the final in 7 of them. He also made 3 appearances on relays, making his final count come to 25 swims in 6 days of competition. Mind boggling numbers.

He comes away with 5 medals, 1 gold, 3 silver and 1 bronze to go along with a pair of 4th place finishes. This may be the biggest program we have seen anyone tackle in recent memory, and it was incredible to watch. He may have shown signs of tiring at times, such as the 7th place finish in the 200 IM final after finishing 1st in the heats, or finishing 8th in the 50 breast on the final day. He put his butt on the line this week and swam this insane schedule despite all of the doubters. Was it too much? Probably, yes. He could’ve done without a few of those races, but a 5 medal haul is something you don’t see too often at a championship meet.

Viktoriya Gunes, formerly of Ukraine but now representing Turkey, also had an amazing showing in Singapore. She went 4 for 4 in gold medals, winning all three breastroke titles to go along with the 200 IM. She also broke both the junior world record and meet championship record in both the 200 breast and 200 IM. Gunes appeared unstoppable throughout the competition, as she finished 1st in every heat, semi or final she competed in. Her 200m breastroke was particularly amazing, as she smashed her own junior world record on the last day of competition by 3 seconds and swam a time that would’ve won the world championship title in Kazan by 1.5 seconds. Her clocking of 2:19.64 was just shy of the world record currently held by Rikke Moller Pedersen of Denmark at 2:19.11, but was well under Kanako Watanabe‘s clocking of 2:21.15 that won worlds earlier this month. Gunes also swam preliminary duties on Turkey’s mixed 4x100m freestyle and 4x100m medley relays, giving her a total of 12 swims this week.

Other swimmers who had a sensational week was Russia’s Chupkov who also won 4 gold medals, Australia’s Kyle Chalmers who had a 7 medal haul including  3 gold, as well as Atherton (AUS), Gemma Cooney (AUS), Taylor Ruck (CAN), Mariia Kameneva (RUS), Penny Oleksiak (CAN) and Arina Openysheva (RUS) who all won 6 medals apiece.

Congratulations Miss Güneş! You are phenomenal!

He went pro, he doesn’t get the same breaks as other 16 year olds…can’t have it both ways. That said, he is a complete stud and seems like a really good guy.

A handful of thoughts on Michael Andrew, some pro, some con:

2. I think it was good to swim all those events. This was his first major international meet, but if his career plans work out it won’t be his last. When you’re 16, it’s better to learn what your limitations are by failing a couple times… Read more »

Completely agree on point #2. In the grand scheme of things, this meet doesn’t really mean much. Rather use it to learn some things over winning a couple races.

He just always seems to bring up breaking records even when he isn’t asked about it. I realize that he’s one of a handful of 16 year old swimmers that are getting a lot of interviews but it’s all the time, and it comes off looking bad to me.

I know right. Judging from the comments, you would think he’s one of the most hated swimmers.

Let’s assume for a second that there’s some conspiracy going on here to give MA preferential treatment for the relay spot…you know the one where he had the fastest 100 BR time on the team, what would be the benefit of doing that?

And how did Reece do in the final compared to Andrew? I mean I know finals aren’t the important race… oh wait…