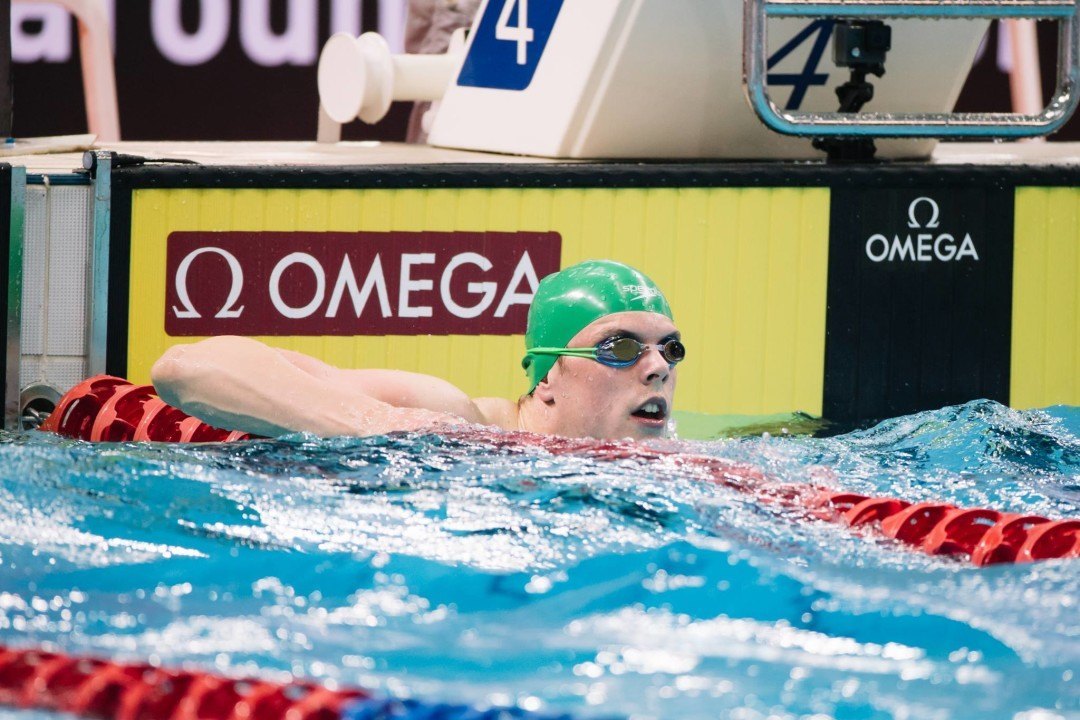 Australia's Kyle Chalmers is ticking all of the boxes to become the next new sprint star in Australia. Current photo via Adrian Seetho/SSA

Kyle Chalmers has further put claim to Australia’s sprinting future after posting a gold medal winning time of 48.47 for the 100m Freestyle, from an outside lane (lane 7) on the final day of the FINA World Junior Championships in Singapore. The 17 year old broke the Australian Age Group record by 0.11,  which was previously held by Cameron McEvoy and set in 2012. The time also betters the previous World Junior Championship Record which was held by Pedro Spajari of Brazil however Pedro was only able to finish 4th in the final with a time of 49.56. The swim however falls short of a World Junior record, which stands at a 48.25 and is held by De Santana of Brazil from 2014.

The win in the 100m freestyle completes the 50m/100m double, showing it is still possible (despite it becoming an increasingly difficult feat) to achieve on the international stage.

This is yet another impressive display from Kyle Chalmers, who hasn’t missed a beat on the international scene this year. The split times of 23.56/24.91 shows a well controlled race and he was the only swimmer to split the second 50 in a sub-25 time, in another James Magnussen type display where the back-end speed is the focus of the race plan. Interesting to note first to the turn was Robert Glinta in a 23.54, however he faded in the final 50m with a 26.33 to finish in 7th placing.

Chambers, who split the fastest heat time, was part of the recent failing of the Australian Men’s 4 x 100m Freestyle relay team in Kazan. It will be pleasing to senior head coach Jacco Verhaeren to see the South Australian register another PB and consolidate his position amongst Australia’s best freestylers as they will be looking to field three world class sprinters by Rio. The Marion swim club member will set his sights on the Olympic trials in April 2016 to ensure he books his seat on the plane to Rio as Australia will no doubt be in contention should Magnussen, McEvoy and Chalmers all be fit & firing.

Great meet for him!

We see one of the consequences of adding all these relays though… he swims the 50/100 free, and earns 7 medals.

Impressive 7 medals for Chalmers!And now, Australia needs only one more stud to go to the top of the World in 4x100free(assuming McEvoy and Magnussen will be at their best at Olympics).

Only one probably with that scenario of yours is that Magnussen is probably only a 50/50 proposition to be fit and anywhere near ready by AUS Trials next April.

The AUS M4X100 made such a mess in the heats in Kazan that not only did they miss the final but also the top 12 which guaranteed automatic qualification for Rio.

To qualify, they need to set a time before 3rd July 2016 that is amongst the 4 fastest of all countries NOT already qualified. With a fit Magnussen, it would be a reasonable assumption that this would be achieved.

However, without Magnessen, this becomes distinctly uncertain. There is McEvoy; proven in this event internationally. You have Chalmers who’s had a… Read more »

Did you mean “problem” instead of “probably”???
I don’t think AUS to qualify will be a problem…they have a bunch of guys in 49low range.They could assembly a team for each month in next year and run around the World(or even compete in April with a B/C team in Maria Lenk Trophy in Brazil-Olympic Test Event).3:13 should be doable for them to achieve.

I fully expect Magnussen to return to form in time and to count him out would be absurd. This is the same guy who scorched a 47.59 in season last year. He’ll be back in a big way.

By no means do I count him out, Shark but the fact remains that his presence CANNOT be considered in any way a certainty.

He was suffering from this shoulder issue mid 2014 through CG & PP & then sought treatment. What has clearly transpired is that the issue has yet to be resolved & until then, his future has to be classified as uncertain.

DD, an AUS quartet of fit Magnussen, McEvoy, Chalmers & Abood would qualify comfortably. But that is all they’ve got as there is no one else that is either fast enough and/or can be classed as reliable. Whilst an AUS 2nd W4X100 could most likely medal in major international meets, there is just not that… Read more »

best chance to get this qualyfying time is @ the BHP Aquatic super series!

At this point, the Super Series does NOT appear on Swimming Australia calendar & may not be held next year. There may be a Trial held at Nationals & most certainly at on/both Grand Prix meets in May/Jun

The critical point around which the viability of an AUS M4X100 for Rio remains Magnussen. Fit & swimming somewhere near his best & this team not only qualifies but has some claims on being competitive. Magnussen ruled out = qualification debateable