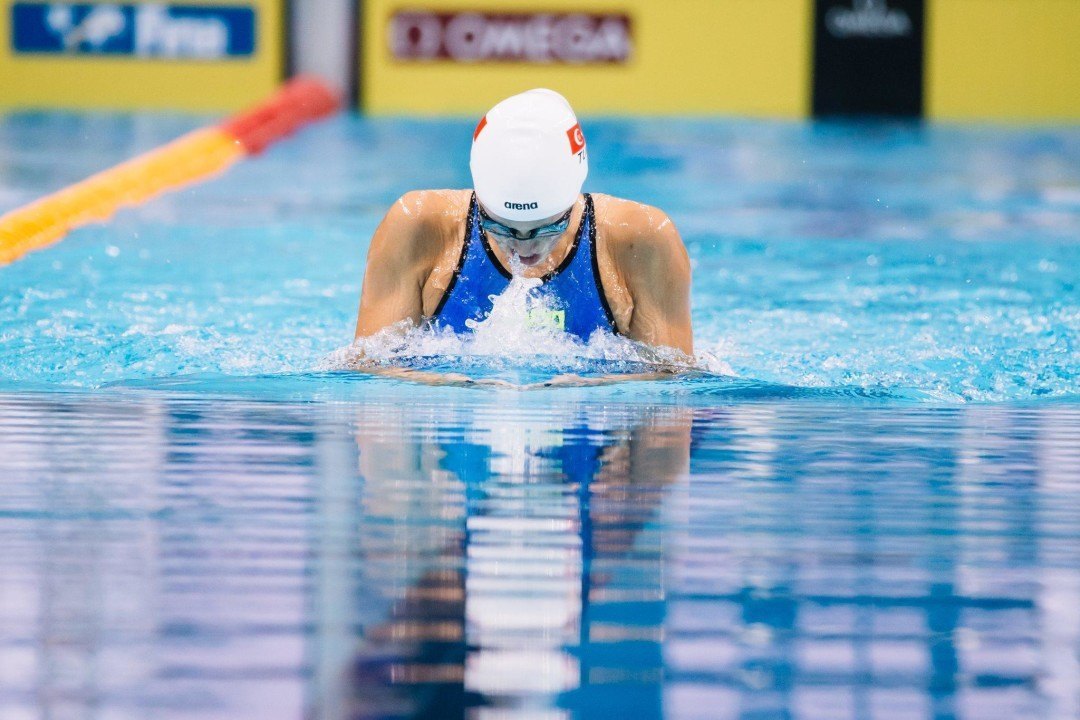 Turkish star Viktoria Zeynep Gunes completed a tough double at day 4 finals, winning gold in the 100 breast and 200 IM - her second and thrid golds of the meet so far. Current photo via Adrian Seetho/Singapore Swimming Association

Swimming in the second semifinal, Australia’s Minna Atherton continued her run of dominance, breaking her own junior world record in the 50 back.

Atherton powered away from the field to go 27.92, taking the record below 28 seconds for the first time.

New Zealand’s Gabrielle Fa’Amausili held the record prior to the morning, and she won the other semifinal at 28.14. Fa’Amausili is the defending champ in the event and the two will tangle in tomorrow’s medal final.

Canada’s Danielle Hanus sits third in 28.27, and for now, at least, the top 3 seem pretty removed from the rest of the field.

Russia’s Anton Chupkov couldn’t quite break his own junior world record, but he earned his second breaststroking gold with a new meet record in the men’s 200 breast.

Chupkov looked smooth and in control for the length of the race, going 2:10.19, just half a second off the world mark he set at Worlds in Kazan a few weeks ago. That breaks the championship record he set in prelims.

Australia’s Matthew Wilson led a group of swimmers challenging Chupkov unsuccessfully most of the way. Wilson was 2:11.23 for silver, and Japan’s Ippei Miyamoto took bronze in 2:11.59.

Just missing the medals was American giant Reece Whitely, who went 2:12.71 for fourth place. Whitley had a bit of a slow start to the race, but had put himself into medal contention by the 150 before the top three pulled away.

Italy’s Nicolo Martinenghi went 2:13.05 for fifth. Behind him, American Chandler Bray touched out Great Britain’s Charlie Attwood 2:15.00 to 2:15.04, with Austria’s Christopher Rothbauer rounding out the heat in 2:16.53.

Rikako Ikee improved her meet record by .02 in finals of the 50 fly, once again shaking, but not breaking, the junior world record, which is still another .02 seconds away.

Ikee was 28.28 for gold, topping the field by almost two tenths for sprint gold.

Canada’s Penny Oleksiak picked up her second individual silver of the meet in 28.45 – she was also second in the 100 free behind teammate Taylor Ruck.

She nipped Russia’s Maria Kameneva for that spot by .02 – a unit of time that’s becoming a trend in this girls 50 fly final.

It’s been an up-and-down meet for American Michael Andrew, but his aggressive lineup choices are starting to look better in light of a gold medal and repeat meet record in the men’s 50 back.

Andrew suffered through a 5-event finals session on day 2 in order to swim this event – he noted on social media that he had to swim the 100 back that day to claim a spot in the 50 back tonight. Though he just missed a medal in the 100 (and the fatigue may have cost him medals in a few other events that day), he made up for it with a gold medal in the 50 back at 25.13, taking .01 off his meet record from prelims.

Andrew won his first individual gold by a wide margin, beating Canda’s Javier Acevedo by about three tenths. Acevedo was 25.46, and two swimmers tied for bronze – Mohamed Samy of Egypt and Robinson Molina of Venezuela. Both were 25.54.

Turkey’s Viktoria Zeynep Gunes mirrored Atherton on the day, working towards a sweep of her own primary stroke. Gunes went 1:06.77 to win the girls 100 breast, once again approaching, but not breaking, the meet record set by world and junior world record-holder Ruta Meilutyte.

Gunes has now won both sprint breaststroke distances, and has only the 200 to go, an event in which she is the junior world record-holder.

Gunes topped Sweden’s Sophie Hansson by exactly one second, with Hansson going 1:07.77. Great Britain’s Katie Matts was third in 1:07.96 – that’s the exact same medal order as the 50 breast from day 2.

Russia’s Maria Astashkina finished fourth in 1:08.12, once again missing a medal by just a few tenths. She and Japan’s Runa Imai might be the chief challengers to Gunes in the 200 breast, and Imai was just .01 behind the Russian in the 100, going 1:08.13.

Event 2 of 3 on the night was another win for Michael Andrew. The American topped semifinals of the 50 fly in 23.66 – just off the meet record.

He’s still four tenths off the junior world record (a 23.28 from Evgeny Sedov, rather than the 23.61 that shows up in FINA’s records database).

Andrii Khloptsov out of the Ukraine is also on the trail for gold, going 23.77 to sit a tenth behind Andrew heading into the final.

Russia’s Vladislav Kozlov was the last guy under 24, going 23.99, but his teammate Daniil Pakhomov was close behind. Pakhomov, the 100 fly champ, went 24.04 for fourth.

Spain’s Alberto Lozano is also safely into the final at 24.12, as are Croatia’s Bruno Blaskovic and Poland’s Michal Chudy, who tied for sixth at 24.25.

We’ll get a three-way swim-off for eighth, in what should be an exciting end to the session. Pawel Sendyk of Poland, Vinicius Lanza of Brazil and Brayden McCarthy out of Australia will all have a claim on that final championship heat lane, each going 24.38 out of semis.

Australia’s Tamsin Cook ended the American run of dominance in the women’s distance races this summer, going 4:06.17 to win gold in the girls 400 free.

The other American, Hannah Cox, finished just outside the medals at 4:08.69, rounding out the first pack that pretty well dropped the rest of the field.

Great Britain’s Holly Hibbott was 4:11.29 in leading the second wave of finishers. She touched out Dong Fuwei of China by .03 – Dong was 4:11.32 and Russia’s rangy freestyle specialist Arina Openysheva was 4:11.54 for seventh.

The second British entrant, Chloe Finch, was the final finisher at 4:12.73.

Australian Kyle Chalmers took home his first individual gold of the meet, going 22.19 to power away with the boys 50 free title.

Though it looked like American Michael Andrew had him beat off the start, Chalmers used his crushingly powerful stroke to overcome any deficit, finishing in 22.19 to rattle the meet record and finish two tenths off the junior world mark.

Andrew would take second, going 22.36, a couple hundredths off his best time ever.

Turkey’s Viktoria Gunes earned her second gold medal of the night and her third gold overall, blowing away the 200 Im field in a meet-record 2:11.03.

Gunes looked firmly in control the entire race, though she did slip the 5th after backstroke after leading on fly. Still, as one of the only breaststrokers in the field (and easily the meet’s best swimmer in that stroke), a Gunes victory never looked too much in doubt.

She put up the best breaststroke split of the field by a full second, and never showed fatigue from her gold-medal 100 breast earlier in the night.

Gunes would win by over a second, with Canada’s Mary-Sophie Harvey going 2:12.37 for silver. Great Britain’s Georgia Coates finished third in 2:12.74.

Italy’s Ilaria Cusinato was 2:13.04 for fourth, just topping the field’s other breaststroke specialist, Runa Imai of Japan (2:13.19). Her Japanese teammate Hiroko Makino was one spot behind in 2:14.03.

The men of Team USA finished the night with a bang, crushing the junior world record and winning gold in the 4×200 free relay.

200 free silver medalist Grant Shoults led off in 1:48.10, bettering his individual time and putting the team over two seconds ahead of junior world record pace. Then 200 free winner Maxime Rooney dropped an outstanding 1:46.55 on the second leg, putting the U.S. firmly in control.

That split for Rooney is very similar to the best split on the previous junior world record-holding relay: a 1:46.39 from James Guy, who would go on to win the world title in the 200 free in Kazan.

Russia was battling the Australians for silver most of the way, but wound up a way back in the bronze medal position at 7:19.45. Ernest Maksumov had the second-best leadoff split of the event at 1:48.99, and Elisei Stepanov was 1:48.81 on the second leg as Russia surged early. Daniil Antipov (1:51.10) and Aleksandr Prokofev (1:50.55) capped off that third-place relay.

I know I should have posted this comment in yesterday’s (day 3, women’s 100m free final) thread, but who agrees with me in saying that the Canadian women may potentially be a threat for a minor medal in the 400m free relay in Rio? They have 3 women who have gone sub 54 this year! Hmmm…

I said that yesterday regarding the state of US women’s sprint in comparison.
And Ruck will continue to improve a lot in the next months.

I agreed to Bobo on that, AUS and Netherland are on their own game right now, 3rd place now is a big fight for US with Sweden (who with just one more girl swimming 54 could battle even for silver) and now Canada

I see USA in the top 3 for sure, just look out for Katie ledecky

Minna is on fire!!