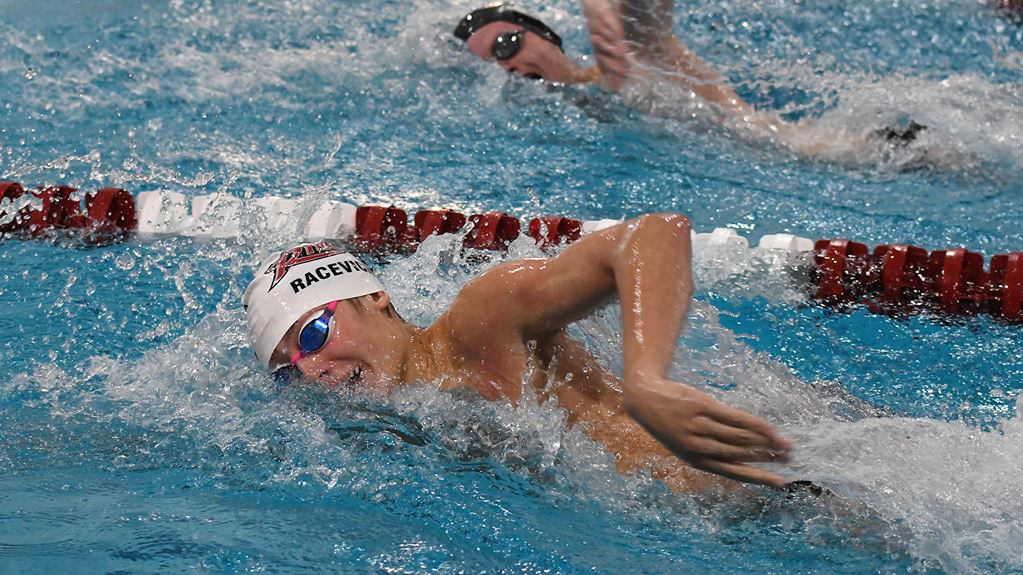 The Broncs (1-1) picked up their first dual-meet victory of the season.

Rider had a big day in the pool as the team racked up victories in 12 different events, including both the 1M and 3M diving.

Freshman Lucas Racevicius (Watertown, CT/Holy Cross High School) continued the strong start to his collegiate career, winning two events. Racevicius came in first in both the 200 back (1:50.11) and the 200 IM (1:54.36).

The other two swimmers to win on Saturday for Rider were Joe Gewartowski (Fort Washington, PA/Upper Dublin) and David Cooper (Spring, TX/Klein Oak). Gewartowski touched first in the 50 free at 21.07 and Cooper came in first-place in 200 breast (2:10.66).

Junior Dillon Walles (The Woodlands, TX/The Woodlands High School) was dominant on the boards once again for Rider, winning both the 1M (303.74) and 3M (328.28) for the third meet in a row. Walles also qualified for the NCAA Zone A Diving Championships on Saturday as well.

The Rider University women’s swimming and diving team fell to visiting Lehigh, 187-106, in a dual meet on Saturday afternoon at the newly renovated Coppola Pool at the Canastra Health & Sports Center.

The Broncs (0-2) suffered their second dual-meet loss of the season.

Senior Olivia Iswalt (Reading, PA/Berks Catholic) was the other Rider swimmer to win, thanks to her first-place finish in the 50 free with a time of 24.63.

UP NEXT
Rider returns to action in two weeks as Metro Atlantic Athletic Conference (MAAC) rival Marist comes to campus for a dual meet on November 2.

LAWRENCEVILLE, N.J. – The Lehigh women’s swimming and diving team continued its hot start on Saturday. 18 hours after defeating West Chester and Bloomsburg the Mountain Hawks swam right past Rider, 187-106. With the win, Lehigh is now 4-0.

Also adding solid contributions throughout the day were Sophia Poeta in the 100 back. Poeta was second with a time of 28.95. Tori Connolly finished second in the 500 free with a time of 5:21.34, followed with a second-place finish from Nicole Shek in the 200 IM at 2:13.35.

Up next, the Mountain Hawks will host Loyola Maryland next Saturday inside Jacobs Pool. The scheduled start time is 1:00 p.m.

The Rider Broncos topped the Lehigh men’s swimming and diving team on Saturday, 180-118. With the loss, the Mountain Hawks now have a 3-1 mark.

“I’m disappointed for the men,” stated head coach Rob Herb. “They put forth such a strong effort, but they just couldn’t come up with the touches today.”

The 400 freestyle relay team was fantastic for Lehigh on Saturday. The team of Walker Wilson, Caleb Eberly, Greg Giannella and Glenn Lasco compiled a fast time of 3:07.52.

“We had a really tough weekend,” claimed Herb. “To have a workout Friday morning, then race at West Chester in a tri-meet, and then race a tough Rider team 18 hours later, it was a grueling weekend.”

Up next, the Mountain Hawks will take time to refresh their bodies and prepare for Loyola Maryland next Saturday inside Jacobs Pool.

“We are very excited to get rest and to take on Loyola in front of our great fans,” concluded Herb.