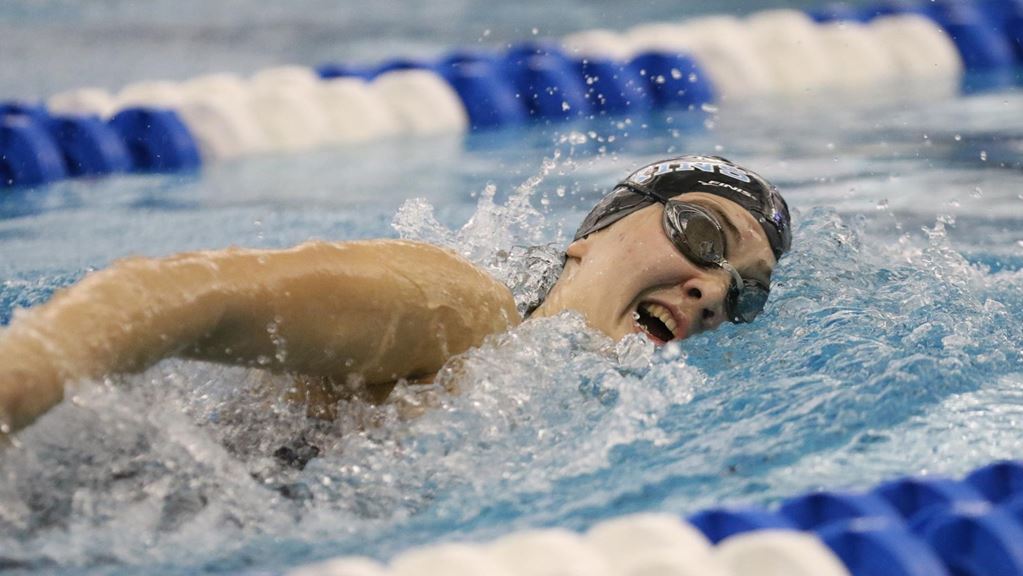 Newark, Del. – The UMBC men’s and women’s swimming and diving squads took to the road for the first time on the young season, facing Johns Hopkins and host Delaware in a tri-meet at UD’s Rawstrom Natatorium.

Junior Natalija Marin (Belgrade, Serbia) became UMBC’s first double-winner of the season, capturing both butterfly events for the women. The Retrievers were edged by Hopkins, 151-142 and fell to the host Blue Hens, 176-110.

After earning silver versus Navy, junior Kai Wisner (Syracuse, N.Y.) captured gold this week in the 1000 freestyle in a time of 9:33.41.

Sophomore Matt Bennici (Walkersville, Md./Walkersville) posted his first victory of 2019-20, besting the field by over a full second in the 200 butterfly (1:52.65)

Asakawa and senior diver Ben Parker (Lawrenceville, Ga.) posted their second wins of the season, capturing the 50 free and 1-meter boards respectively. Asakawa won his event in 21.18, while Parker easily outdistanced three other divers at 253.95 points.

After the break, senior Ilia Rattsev (Moscow, Russia) earned his first individual gold of the season, touching first in the 100 freestyle at 46.22. Zuric was strong in the 200 backstroke, winning in a time of 1:50.12 and Dobbie capped UMBC’s gold haul by edging a JHU swimmer to win the 100 backstroke with a 51.27 mark.

Marin, who earned silver and bronze versus Navy in the fly events a week ago, stood atop the medal stand in both races in Newark. She outdueled teammate freshman Kylie Kelly (Hagerstown, Md.), as the Retriever women finished 1-2 in the 200 yard event. Marin completed the race in 2:06.48, while Kelly was just over a second behind at 2:07.52.

In the shorter race, UMBC also earned gold and silver. Marin won the 100 in 57.75, while senior Sotiria Neofytou (Limassol, Cyprus) was just behind at 57.89.

UMBC junior Vanessa Esposito (Quebec, Canada) opened the women’s individual events by taking silver in the 1000 freestyle in a time of 10:46.32.

Senior diver Abby Biddulph (Egg Harbor City, N.J.) hauled in a pair of silvers in the diving competitions. She amassed 201.05 points on the 1-meter board and 222.75 points at the 3-meter mark.

UMBC gets the week off from competition and returns to the pool when they make the short trip to Towson to take on the Tigers in a Nov. 2 dual meet. The action gets underway at 4:00 p.m.

Quoting Coach Armstrong
• “We are very impressed with the effort the team put forth this weekend. It was a grueling early season test, but the team’s enthusiasm was obvious, to walk away with some wins is icing on the cake.”

Top Finishers
• Hopkins opened the day with a win in the 400 Medley Relay. Sophomore Sydney Okubo, senior Sonia Lin, sophomore Rebecca Ssengonzi and senior Kiki Petersen won by more than three seconds with a 3:51.56. The team of freshmen Renee Liu, Cali Wilson and Emerson Davis and sophomore Sophia Girgenti placed fifth in 3:59.72.
• The Blue Jays then took third and sixth in the 1000 Free. Junior Emma McElrath clocked in at 10:53.01 with freshman Rayna Saldanha finishing in 11:03.67.
• Senior Michelle Wang followed with a second-place finish in the 200 Free with a time of 1:54.19. Sophomore Elaine Lipkin placed fourth in 1:55.86.
• Liu grabbed the top spot in the 100 Back as she touched the wall in 58.03. Freshman Cecilia Cortez followed in fifth place in 1:00.40.
• Lin made it two in a row for the Jays as she beat the field with a time of 1:06.58 in the 100 Breast. Davis then took third place in the 200 Fly in 2:07.82 with Ssengonzi finishing in fifth (2:09.73).
• Sophomore Kristen Alicea-Jorgensen earned touched first in the 50 Free in 24.44. Junior Mikayla Bisignani followed in fourth place in 25.01.
• After the diving break, Petersen grabbed a win in the 100 Free as she clocked in at 51.75. Alicea-Jorgensen finished in fourth place with a 53.51.
• Hopkins then took three of the top five spots in the 200 Back. Wang led the way with a winning time of 2:04.48, with Liu placing second in 2:04.83. McElrath finished in fifth in 2:08.60.
• Lin followed with a second-place finish in the 200 Breast with a time of 2:25.14. Lipkin then cruised to a four-second win in the 500 Free, touching in 5:07.47.
• Ssengonzi placed third in the 100 Fly (58.14) while Cortez finished in fifth place (59.71). Okubo then took third place in the 200 IM (2:08.72), missing second by just five-hundredths of a second, in the final individual event of the day.
• Hopkins wrapped up the meet with first and fifth-place finishes in the 400 Free Relay to secure the two victories. Petersen, Alicea-Jorgensen, Girgenti and Wang won the relay in 3:30.22, beating the team from Delaware by more than three and a half seconds. Liu, junior Carmela Irato, Lin and Bisignani combined for a 3:39.45.

What it Means
• All four of Hopkins’ wins this season have come against Division I opponents.
• This is Hopkins’ first win over Delaware since 1978 and just the second ever. The Blue Hens had won the last 11 meetings. This is JHU’s first win versus UMBC since 2002 and just the fourth all-time. The Retrievers had won four straight in the series.

The Johns Hopkins men’s swimming team won six events en route to a win over host Delaware Saturday in a tri-meet with UMBC.

Quoting Coach Armstrong
• “We are very impressed with the effort the team put forth this weekend. It was a grueling early season test, but the team’s enthusiasm was obvious, to walk away with some wins is icing on the cake.”

What it Means
• Hopkins earns its fifth straight win over Delaware and is now 6-4 all-time against the Blue Hens.

Up Next
• Hopkins returns to the pool in two weeks at the Thomas Murphy Invitational at nearby Loyola. The meet is scheduled to begin at 5:00 pm on Friday, November 1.