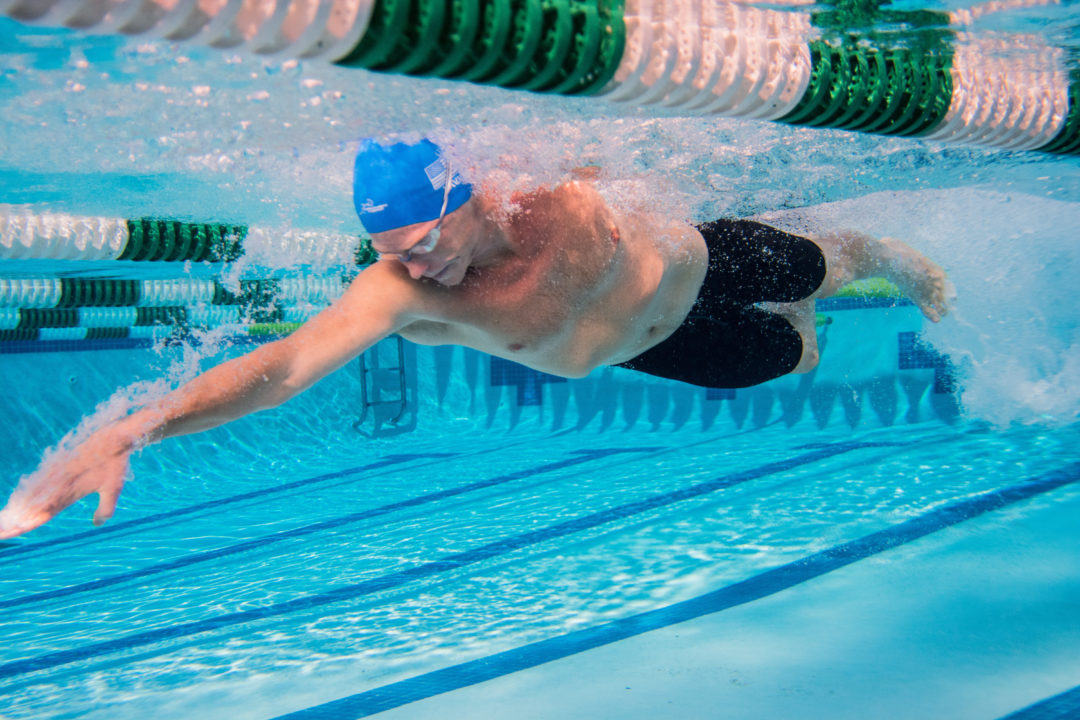 To compete in swimming at your very best, every possible effort should be made to reduce frontal drag during your race. With boats, it is a well-known fact that the shape of the hull at the front end of the boat has a significant influence on its frontal drag forces. For swimmers, the front end is primarily the head, which is large and roundish; clearly a non-streamlined shape. Anything we can do to reduce frontal drag from the head will be beneficial to the swimmer’s speed.

We have spoken a lot about the importance of head position technique in swimming in all four strokes. Getting the head under water at the fastest points in the stroke cycle helps to reduce frontal drag. According to one study at the University at Buffalo[1], surface or wave drag accounts for around 25% of the total drag at race speed. With the head under water, a second component of frontal drag, friction, will increase compared to being partly in the air. According to the same study, friction (from the entire body) also contributes around 25% of the total frontal drag at race speeds, so a reduction of a swimmer’s friction, wherever possible, is desirable.

The inside of Hammer Head Swim Caps.

Wearing a swim cap is one technique for reducing friction. I have often wondered if the type of swim cap being worn really makes a difference. There are swim caps made of latex, silicone and most recently, a thicker silicone material, called dome caps. The thicker dome caps tend to be smoother on the head, while the latex and thinner silicone caps tend to wrinkle on the head. Recently, using our Propulsion/Drag Meter technology (AP labs Italy) in Islamorada, Florida we were able to compare the passive frontal drag forces caused by wearing two different types of swim caps.

For 50 meters I was pulled under water at relatively constant and average speed of 2.22 m/sec in a passive (fixed) streamline position wearing a cap, training suit and goggles. That is pretty close to world record speed for the men’s 50-meter freestyle event. I wore a thinner silicone cap (Race Club) for the first test and a thick silicone racing cap (Hammer Head) for the second test. In just under ten seconds, nearly 200 frontal-drag force and velocity measurements were acquired during each test. When adjusted for the identical speeds (speed influences the drag force), the average frontal drag force, while wearing the thinner silicone cap, was 226.77 Newtons. With the dome racing cap, the average frontal drag force was 202.89 Newtons. That represents a 10.5% reduction in frontal drag by wearing the dome racing cap.

I expected to find a difference, but was surprised to find how much of a difference the swim cap makes in reducing frontal drag. Given the high speed of the test and considering that the head was under water for the entire duration, a swimmer cannot expect to reduce the average drag force in his swimming races by 10.5% by wearing a dome cap.

However, in a sport where races are often won or lost by hundredths of a second, any drag reduction that can be achieved legally is a good thing. For your fastest racing, I recommend using the thicker dome caps.

“Swimming with the head down is one of the most important fundamental techniques that we teach at The Race Club. Yet few swimmers do that, because in that position, they cannot see what is in front of them. By wearing the Hammer Head® Caps, it alleviates the fear of running into someone and enables swimmers to swim more correctly and faster.” — Dr. Gary Hall, Sr. Executive Director of The Race Club

Learn more about the Hammer Head caps with the videos below.

Swimming with the head down is one of the most important fundamental techniques that we teach at The Race Club. Yet few swimmers do that, because in that position, they cannot see what is in front of them. By wearing the Hammerhead Caps, it alleviates the fear of running into someone and enables swimmers to swim more correctly and faster.” – Dr. Gary Hall, Sr. Executive Director of The Race Club

Hammer Head Swim Caps is a patented product of Mako International LLC, co-founded by David Burns, a 20-year swim coach and swim school owner, and Theresa Finn, a swim mom and sports brand marketing and business development executive with a manufacturing background. The Hammer Head has been endorsed by Rowdy Gaines and the ASCA (American Swimming Coaches Association), USA Synchro and Hope Floats Foundation. Hammer Head® Swim Caps are the world’s only protective swim cap and are ideal for every age and skill level of swimmer bringing confidence in the water through improved head protection. Caps retail for $34.95 and are available in three sizes – large medium and small.