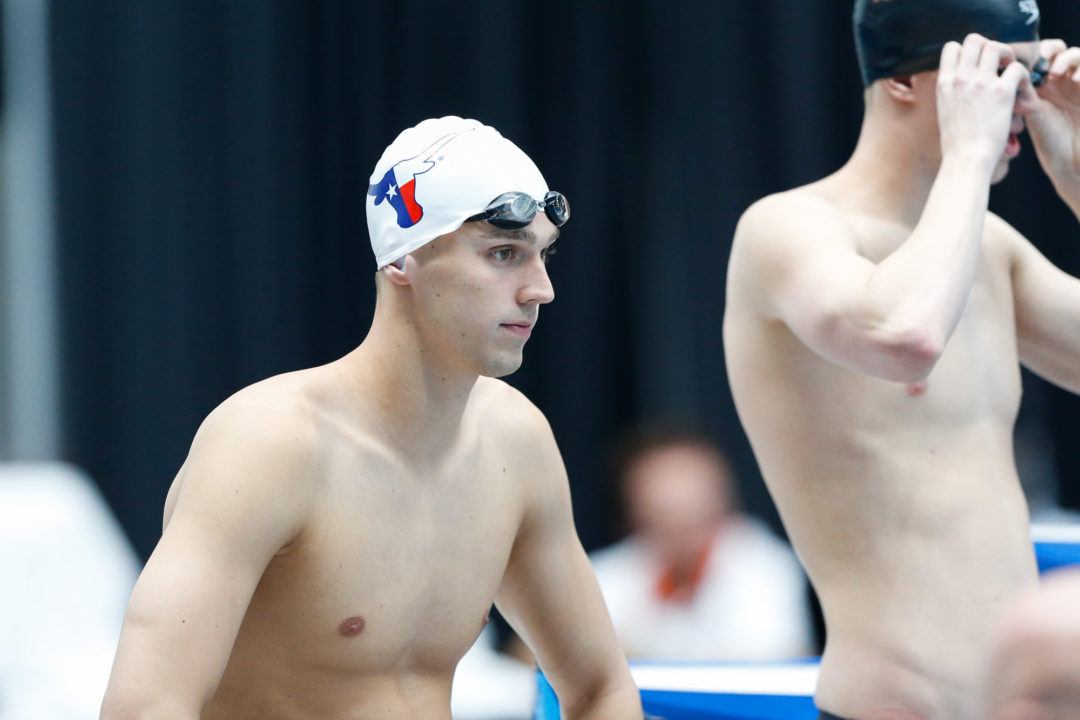 It's been a wild ride for Texas's Clark Smith. But he ends his collegiate 500 free career with the sweetest redemption story imaginable: returning to the top of the NCAA with the fastest swim in history. Archive photo via Tim Binning/TheSwimPictures.com

It’s been a wild ride for Texas’s Clark Smith. But he ends his collegiate 500 free career with the sweetest redemption story imaginable: returning to the top of the NCAA with the fastest swim in history.

Smith went out in incredibly gutsy fashion and held on over a brutal field, going 4:08.42 to break American, NCAA and U.S. Open records in the event.

Peter Vanderkaay held all of those records from a pair of swims. His 2006 swim of 4:08.60 was the NCAA and meet record, while his 4:08.54 from 2008 held American and U.S. Open records. Those records stood for 11 and 9 years, respectively, before Smith finally got to them.

Smith, of course, has his own history with chasing the record. As a blue-chip freshman, he missed NCAAs entirely for Texas. But as a sophomore, he broke out in historic fashion, winning the NCAA title in 4:09.72. The next year, he went 4:08.82 to rattle the record midseason, then bombed out at NCAAs to finish 21st and miss finals entirely.

But as a senior, Smith found redemption, going 4:08.42 to break all of the records and conclude his collegiate career – in this event at least – on top.

In the same race, his teammate Townley Haas moved up to a tie for #4 all-time and Michigan freshman Felix Auboeck also jumped into the top 10:

Clark looked like he was favoring his right leg on the podium. Anyone know why?

Because swimmers have terrible posture

It was from carrying all the haters

He had trouble with it immediately getting out of the pool. The trainers greeted him at the blocks. Maybe a quad cramp on the final push and sprint?

Happens every time I swim under 4:10 too.

so fantastic! so fast! great job.

Did he get off the podium and throw away his trophy like he did every big 12 medal?