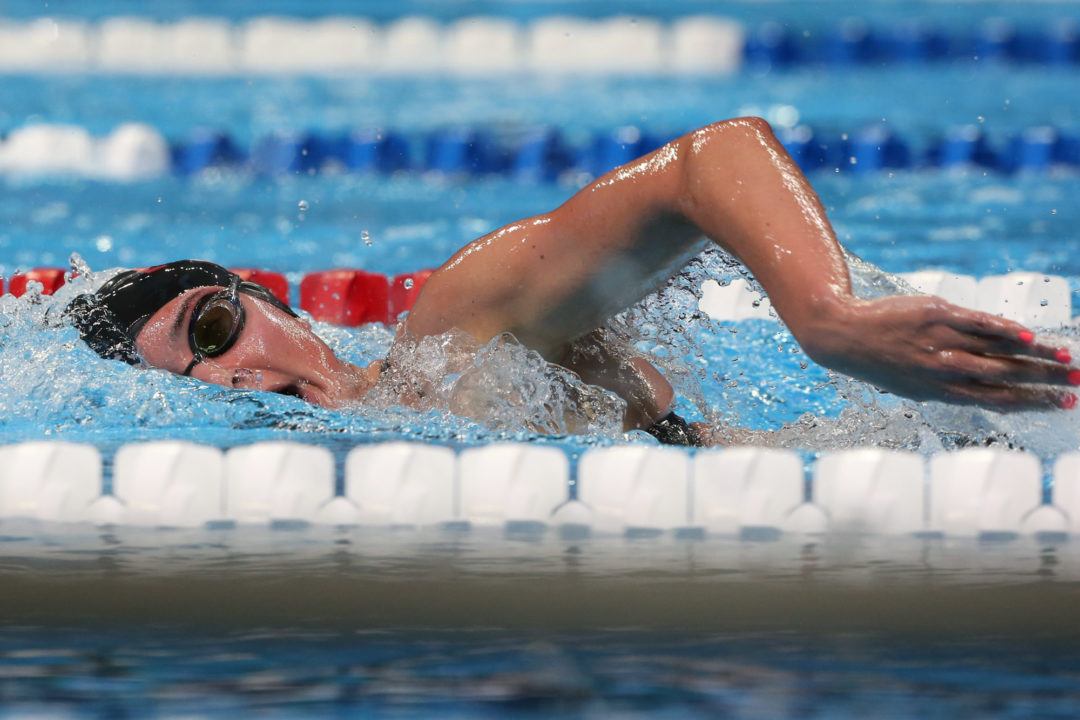 Courtney Harnish is going to give Georgia some enticing options with NCAA scoring-worthy times in multiple events. Archive photo via Tim Binning/TheSwimPictures.com

It has been a very busy summer, with World Championships showcasing the best swimmers on the planet last month, world records going down left and right, and a lot of fast swimming yet to come at the World University Games and the World Junior Championships.

It’s time to start shifting attention to the NCAA season, though, as college swimmers nationwide are heading back to campus to shake off the summer and get down to business. We’ll kick off our annual rankings for the incoming classes in the NCAA with the girls numbers 9 through 12.

Here are the 9th-through-12th-ranked Women’s NCAA Swimming & Diving classes (plus some honorable mentions), with the top 8 to follow later this week:

The UVA women are in rebuilding mode after losing a fantastic senior class that included Olympic bronze medalist Leah Smith, All-American stroke specialists Laura Simon and Kaitlyn Jones, and key relay piece Ellen Thomas, among others. They also just had most of their coaching staff ship off to other schools, with Augie Busch taking over the Arizona program (with Cory Chitwood in tow) and Sam Busch relocating to TCU.

There’s good news for UVA, though, as NC State’s Todd DeSorbo will get to work as their new head coach. Meanwhile, in the pool, there is a wealth of freestyle talent heading to Charlottesville, which is going to be a huge help– all four 4×100 free relay members at NCAAs are out of eligibility.

Kyla Valls and Paige Madden are both fantastic 200 freestylers (1:45.6 for Madden, 1:45.9 for Valls) that will likely join the 4×200 free relay immediately. Both will be powerful in other events, as Valls has been 49.9 and 22.8 in the sprints and Madden can extend to the 500 (4:42.1) and has a great 200 back (1:55.0). While Madden hasn’t hit best times recently, Valls has some momentum after going a lifetime best 2:00.9 in the 200 free long course at the US Open, and both she and Madden will be a big freestyle boost to the program. Additionally, Singaporean Anna Pang brings more sprint free power with a 26.0 in long course in the 50 free.

This is a gigantic class for ‘Bama, a school that is trying to get their women’s team on par with recent success from their men’s program. The big names are German mid-distance freestyler Leonie Kullmann and Hungarian sprinter Flora Molnar. Both women swam for their respective countries at the 2016 Olympics in Rio, and they have some very impressive long course times that put them at the top of all incoming freshmen in the entire NCAA for this season.

Molnar is more sprint-based, with really impressive speed in the 50’s. She’s been 32.1 breast, 26.1 fly, and 24.9 free in long course– she could feasibly swim any of those legs on a medley relay, and considering ‘Bama’s 200 medley legs were 28.3 breast and 23.8 fly at NCAAs last year, she’ll probably be a significant upgrade on either of those strokes. Molnar has also been 54.9 in the 100m free and 59.3 in the 100m fly, so if she can translate into short course, she’ll be one of the best and most versatile sprinters in the SEC.

While Kullmann and Molnar are really impressive prospects, they have yet to prove themselves in yards, which is why ‘Bama isn’t ranked any higher. The Crimson Tide also doesn’t have a ton of impact players in their big class, although Austrian Julia Kukla (56.8/2:01 free LCM) is another nice pickup.

Like Alabama, this is another big class. NC State continues to have stronger and stronger classes coming in, and this one has two key transfers to note.

Summer Finke and Lexie Lupton come by way of Florida State and Texas A&M, respectively, and both have NCAA experience, making them proven assets for the Wolfpack. They’re on opposite ends of the distance spectrum, with Finke’s best event being the mile and Lupton’s the 50 free. Finke had a great summer, finishing top 8 in both the 1500 and 800 at Worlds Trials in Indy. Her long course times (16:22/8:34/4:12) from this summer are much more impressive than her SCY bests (16:17/9:46/4:47), suggesting that she’ll be riding an improvement curve into the 2017-18 season. Lupton, meanwhile, has been a key 200 free relay piece for the Aggies, and she’s split sub-22 in the past.

For the freshmen, Portuguese Olympian Tamila Holub is right on par with Finke in long course (16:20/8:36/4:14). Considering the development of senior Hannah Moore in the distance races, the coaching staff will get two more distance aces with big potential in Finke and Holub, making for a continued tradition of distance excellence in Raleigh. Speaking of Moore, her sister Kate will be joining the Wolfpack as a 53.9/1:56.4 backstroker as well as a 2:00/4:13 IM’er.

The Wolfpack will get a breaststroke boost with Jacquee Clabeaux and Olivia Calegan, as Clabeaux has been 1:00.8 and Calegan 1:01.5 in the 100, while the former has been 1:09 in long course and was the 11-12 NAG record-holder in the 50m breast up until Zoe Skirboll broke that mark recently. This is really big for NC State, as All-American breaststroker Kayla Brumbaum just exhausted her eligibility after last season.

That’s pretty huge; just getting a newcomer who can score in the NCAA B final of one event would be big for a team, but she’s able to supply a lot of speed across multiple events. Besides her best events, she’s also a 52.8 flier, 53.7/1:54 backstroker, and 16:05 miler, so she will be a huge plus in dual meets who can also help out in medley relays and the 800 free relay.

Sammie Burchill will join sister Veronica in Athens this season. She’s the best SCY 200 IM’er in the class besides Stanford’s Brooke Forde at 1:56.6, and she is also a strong backstroker (53.7/1:56.8) to go along with that. There aren’t many places better than UGA or better coaches than Jack Baurle for IM development, so Burchill could rapidly improve into a team leader in just a season or two with the ‘Dawgs. The same goes for Danielle Dellatorre, a 1:59.9 IM’er who also goes 1:01.6 breast and 49.9 free. She’s going to be a helpful addition for their breaststroke group, but UGA is still going to be without a thunderous sprint breaststroker this season.

The final big addition is Canadian distance specialist Olivia Anderson, the 2016 Jr Pan Pac silver medalist in the 1500 free. She’s just a bit faster than the NC State additions Holub and Finke (16:18/8:32), and she’s following in UGA distance star Brittany Maclean’s footsteps. Anderson trains with coach Kevin Thorburn at Etobicoke Swimming, which is where Maclean trained before moving to Athens for her freshman year. UGA just graduated their best distance freestyler in Rachel Zilinskas, so Anderson is arriving at an opportune time.

Donna Blaum is a sleeper for that UGA team ?

This is great! The only thing I want to mention is that Calegan is now the former 11-12 NAG record holder in the 50 meter breaststroke; Zoe Skirboll just broke that record a week or two ago.

Thanks, N P. The NAG lists were updated last in June, I believe, and I blanked on Skirboll’s recent swims.

When will we be able to see the men’s class?

Swammer12345 – we’re going to roll out all of the women’s classes through Wednesday, and then the men’s classes.

can I do the article for the rest of this. I want to rank Stanford like #4 just to troll people, but try really hard to prove why I think they should be 4. I think I can convince some people