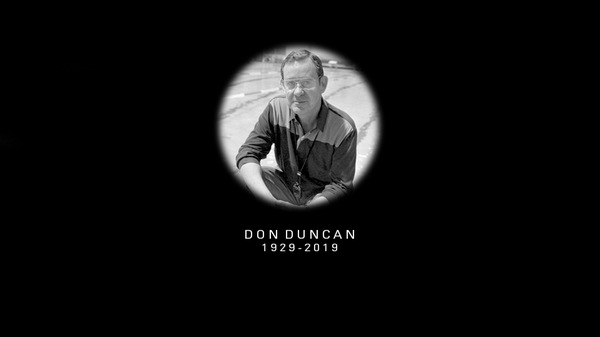 Puget Sound mourns the loss of Hall of Fame Swimming Coach Don Duncan, who passed away Friday (May 31) at the age of 89. Current photo via Puget Sound Athletics

TACOMA, Wash. – Puget Sound mourns the loss of Hall of Fame Swimming Coach Don Duncan, who passed away Friday (May 31) at the age of 89.

Coach Duncan started his Puget Sound career in 1956 as a pool manager and swimming instructor. After just one year at Puget Sound, he became the head coach of the Loggers’ first swimming team. Coach Duncan retired from coaching the Loggers in 1994, and he was inducted into the Puget Sound Athletics Hall of Fame in 1996.

“Don Duncan will always be remembered for the gentle and caring manner in which he did his job and interacted with people,” said Dr. Richard Ulrich, who was Puget Sound’s Director of Athletics from 1983 to 2003. “Don was one of those unique individuals who you never heard a negative thing about him, and in turn, he never spoke of others in a demeaning manner. As his colleague and close friend for over 30 years, I can honestly say he is one of the finest men I have had the privilege to know. Don is a tremendous asset and a treasure for the University and Logger swimming program. He will be missed!”

Twelve of Coach Duncan’s former swimmers are in the Puget Sound Athletics Hall of Fame.

“I will be forever indebted to Don for his personal and professional support,” said Puget Sound men’s and women’s swimming head coach Chris Myhre. “I am grateful for his mentoring and friendship, and for being such an amazing human being. Coach Duncan’s influence over this program goes back over 60 years, and that influence will remain until the end of time.”

“Don was a true gentleman – with a flair of wit and wisdom,” said Puget Sound Director of Athletics Amy Hackett. “His loyalty to Puget Sound Athletics – across all programs – endured throughout his life and he will long be remembered and cherished.”

Coach Duncan posted a dual meet record of 307-127 (.707) at Puget Sound. In addition to coaching, Duncan was a physical education instructor of the university. He was also a long-time member of the Logger Club, including a stint as the president.

Prior to arriving at Puget Sound, Coach Duncan was a communications officer for the United States Air Force. He graduated from Washington State College in 1951. The memorial is June 14 at St. Charles Borromeo, 7112 S 12th St, Tacoma, Wash. (98465), at 11 a.m. There is a reception at the church following the memorial.