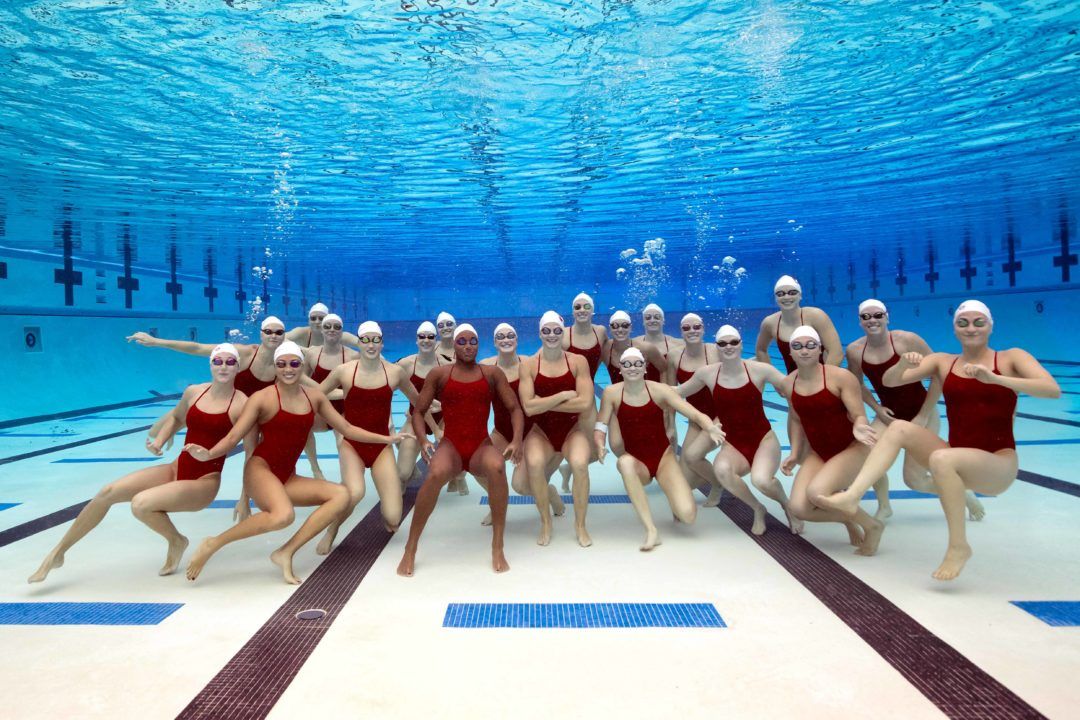 Like in 2018, the Stanford women again have 18 swimmers that will earn invites to NCAAs. Archive photo via Mike Lewis/Ola Vista Photography

UPDATE: Our algorithm missed 2 ties for 38th place. Below has been updated.

Update 2: Alabama’s Rhyan White has been entered with a converted LCM time. SCM conversions are allowed, but LCM are not. White’s best SCY time of the season is 1:42.25. While she’s already invited otherwise in the 100 backstroke, pulling her time from the 200 back rankings would then pull Bayley Stewart of Notre Dame and Samantha Shelton of Harvard up to 37th place in the event and in to the meet. Relevant updates have been made below.

SwimSwam resident mathematician Andrew Mering has run the numbers, and he projects that the cut line will fall in the middle of the 38th-ranked line (based on swimmers for whom that is their highest seed).

This is a spot-and-a-half lower than last year, where the invite line fell between the 36 and 37 line on the selection procedures.

The official NCAA Championship cut-line will be out on Wednesday, and it’s possible for there to be small changes on the pre-selection list between now and then that could shift this line, though it wouldn’t dramatically move it.

Remember: once a swimmer is pulled into the meet, they can swim any other 2 individual events for which they have a B cut. Below is the list of alternates who will be pulled in if anybody withdraws between now and the start of the meet. Historically, there are usually a handful of these scratches due to injury or illness. This year, Stanford has 18 swimmers invited – which means that if any of their divers earn a spot at NCAAs (and they should) via zone diving, they’ll have a choice to make about scoring potential. That means the top of the alternates list has a good chance of being called up.

Why would Kylie Powers be on the alternate list if she’s tied with Jinq En Phee for 38th (100 breast)?

Next best event for both is 200 breast, and Powers is ahead of Phee in that. If that is the tiebreaker than it would appear Powers should be in.

That’s correct. Powers and Sanderson are in. Our algorithm missed the tie for 38th.

Looks like the 31st line on the 200 back is a LCM converted time. I don’t think that is allowed for selection. That should affect the list moving Bayley Stewart to the 37 line and 38 is also a tie that would get in.

How come Vivian Tafuto and Danielle DellaTorre are tied for 37th/38th in the 200 breaststroke, yet Vivian took the 37th spot? I believe Danielle has the faster time in the 100 breaststroke? How does that work ?

I would think Stanford will qualify a few divers and choose to take them. If so, any idea which Stanford swimmer is left home and how that impacts the alternate list? Is it next alternate in or next ranked swimmer in that event?

It’s coach’s choice. Katie Glavinovich is probably the choice, unless the coaches know something that the rest of us don’t.

Yes Craigh she was. I hope she goes this year.

I’m sure there are many out there that really appreciate all the information you have presented here. The SWIMSWAM staff is really on top of this. I know there are families out there sitting on pins and needles waiting for the invites. This allows them to get a feel for where their swimmer stands. Great job and thanks!

Awesome work and insight SwimSwam team. Really appreciate all you do.