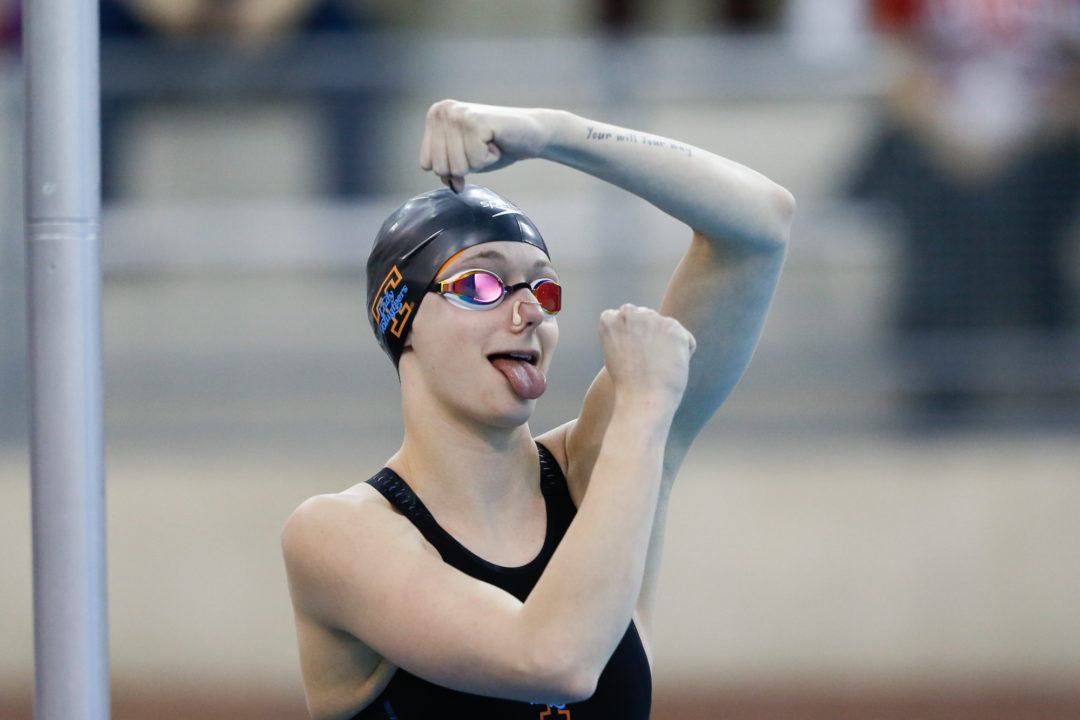 Maddy Banic, at the heart of Tennessee's sprint group, will compete this weekend as the Vols host the Tennessee Invitational. Archive photo via Tim Binning/TheSwimPictures.com

Swiss freestyle ace Antonio Djakovic put up a 400m freestyle performance at the Croatian Golden Bear meet that beat what he produced in Budapest.

Six teams will square off this week at one of three major mid-season invitationals. The biggest splashes are expected out of the Tennessee Vols, the hosts. Their women were ranked 9th in the latest SwimSwam power rankings, and the men 11th, as both programs are shooting for a top ten finish come March at the 2019 NCAA Championships.

The Tennessee women have a very strong sprint group, led by Erika Brown and Maddy Banic, along with sophomore Bailey Grinter. Brown, the 2018 NCAA runner-up in the 50 free and 100 fly, could very well pop a nation-leading time this week. Look for seasoned racers Meghan Small and Tess Cieplucha to go for NCAA invite times, too.

The IM’s should be very hotly-contested, especially the 400. Between Small, Cieplucha, Penn State’s Ally McHugh, Duke freshman Easop Lee, and Duke sophomore Connie Dean, this is a fairly crowded event.

Meanwhile, Denver’s men bring a pretty strong sprint free group themselves, though Tennessee’s Kyle Decoursey is the man to beat in the 50 and 100 free. Matthew Garcia has been one of the top sprint backstrokers in the country, having a strong unsuited season best of 47.44 in the 100 back.

Agree – change the pic – I always hate seeing pics reflecting swimmers as silly….we all know they are…but this pic needs to be different…also there is something written on her arm

“Your will your way.” I personally think the pic is fun and fine but wonder if other people feel the same way.

ok but who cares

This picture is the essence of this young women. She has tremendous energy and brings it to her team by being fun, silly, and loud. The whole team thrives off their ability to have fun in their sport, a lot more fun than some other teams, and she is one major part of that. The tattoo is something incredibly meaningful to her, its not just some sharpie marking as if she was at a summer league meet. She has had a trying journey with the sport of swimming, and in life, the past few years and the tattoo means something to her. Please consider refraining from giving your opinion if you dont know much about the girl or the team.… Read more »

It’s a meaningful tattoo on her arm. She’s an amazing girl and brings her happy energy everywhere she goes. So I personally think it’s perfect for this pictures because I’m sure she brings this amazing energy to the sprint group, as to her home town RVA where I personally know her.

Thats what we talking about! Our Lady Vols and Manly Vols will get rough on the competition. Go Tennessee! Love the pic!!!