Preview: Raia Rapida Set To Blast Off In Rio On Sunday 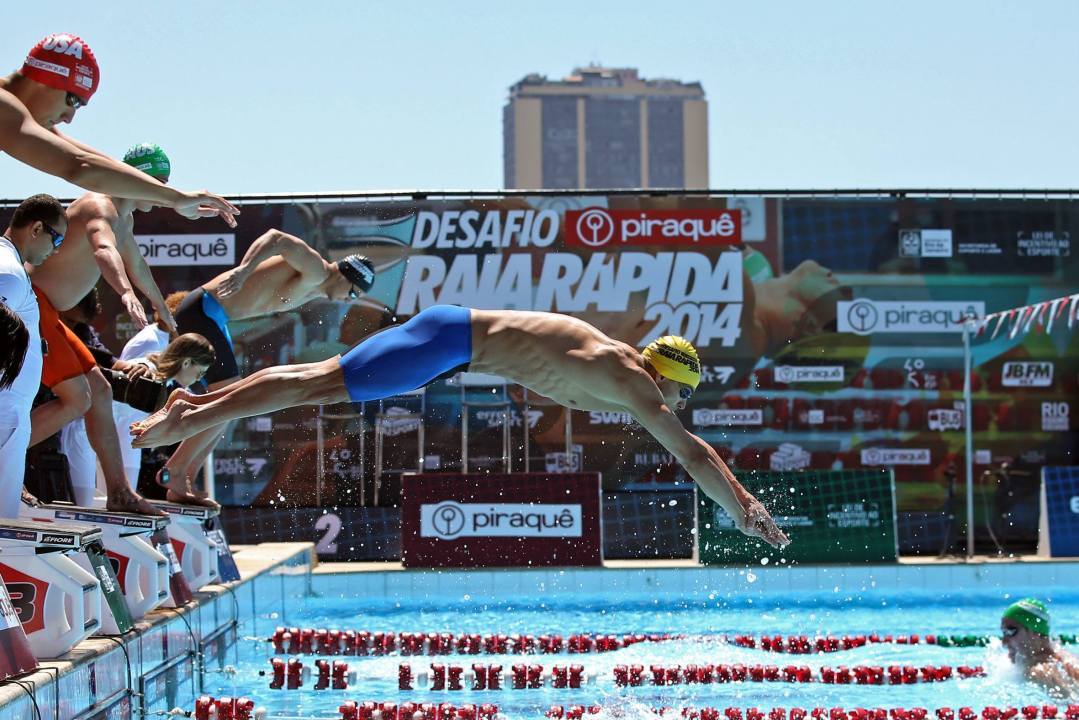 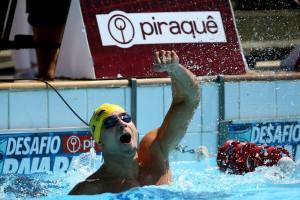 Felipe Franca and Nicholas Santos (pictured) each won their respective strokes as Brazil dominated the 2015 Raia Rapida sprint meet in front of a home crowd.

The meet will take place at the Botafogo Aquatic Center in Rio, which is sandwiched between two iconic landmarks: the Christ the Redeemer statue and the Sugarloaf mountain.

A sprint showdown, the Raia Rapida meet is composed entirely of 50s in each stroke. Raia Rapida (which means “fast lane” in Portuguese) features three-round knockout races in each of the four strokes. Each nation enters one swimmer into the first round of each stroke, and the slowest swimmer of the four is eliminated.

The remaining three swim again in round 2, with the slowest again eliminated. Finally, the two qualifiers go head to head in the final.

The meet ends with a 4×50 medley relay for national bragging rights.

The competitors in each stroke:

Orzechowski is currently highest in the world rankings for 2015, hitting a 24.71 just a few weeks ago at the Jose Finkel Trophy. But watch for Plummer, who fought through a stomach bug at the World Championships but still sits less than a tenth back at 24.79. Plummer was the 2013 World Champs silver medalist in the 50 back.

Di Toro is a former national record-holder for Italy, but has seen his records fall and hasn’t cracked the world’s top 50 this year. Zandberg sits 42nd in the world for 2015, but might have more left in the tank since he didn’t swim Worlds this year. He was the 2007 World Champ in the event.

Again, Brazil is the likely favorite. Franca has been 26.87 this year, one of only five men to break 27 in 2015. South Africa will be without Cameron van der Burgh, but get his training partner in Zorzi, who has been 27-mid this year.

Scozzoli is Italy’s national record-holder in the 100 breast, but sits just behind Zorzi in the world ranks for 2015. Once again, the Americans enter a swimmer looking for redemption after a rough summer season. Alexandrov, a former national champ, has only been 28.3 in the 50 this year, but could be right in the hunt with his lifetime-best of 27.53.

Santos is the #2-ranked swimmer in the world and was the World Champs silver medalist. Perhaps his top competition will be a swimmer who wasn’t even at Worlds: American Giles Smith. Smith was the Pan Ams champ in the 100 fly and is the only new member of Team USA from the 2014 Raia Rapida.

The other two spots go to converted sprint freestylers who will try their hands at butterfly. Schoeman, of course, is a former world record-holder in the 50 fly, but is also one of the oldest swimmers in the meet at 35. Santos is also 35 years old and is the only swimmer older than Schoeman. The South African has been 23.48 this year, compared to 23.30 for Smith and 22.90 for Santos.

Dotto has been 23.87, but that was back at the Italian Championships in April.

The 34-year-old Ervin comes in with the best time of the year, sitting 16th in the world ranks at 21.98. An Olympic Champion fifteen years ago, Ervin is still holding his own on the world level, and is likely the favorite here, especially with Dotto and Schoeman swimming fly.

Bruno Fratus was slated to take Brazil’s spot, but he is working through the immigration process in the U.S. and was unable to leave the country, according to BestSwimming.br. That left the 19-year-old Santana, the youngest swimmer in the meet, to take the freestyle spot. Santana has been 22.22 this year.

South Africa’s Tandy is a former NCAA champion for Arizona, and sits just inside the top 50 in the world for the year at 22.28. Santucci is just behind with a 22.37 he put up back in April of this year.

A list of fun facts about the 16 athletes entered in Raia Rapida, courtesy of BestSwimming.br