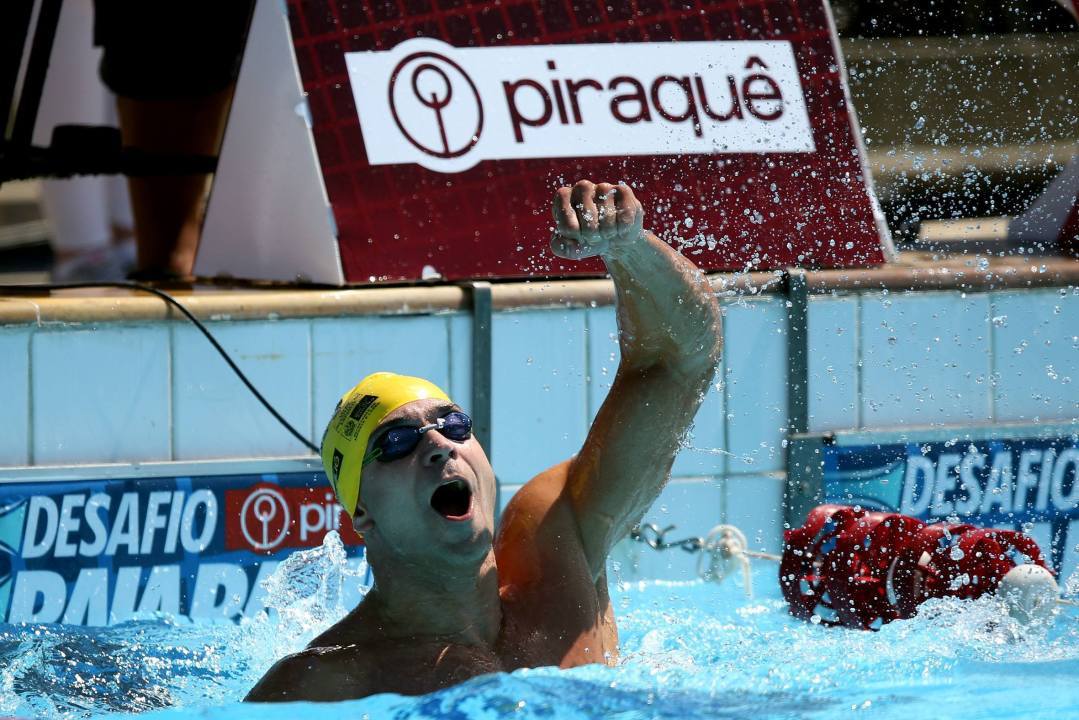 Felipe Franca and Nicholas Santos (pictured) each won their respective strokes as Brazil dominated the 2015 Raia Rapida sprint meet in front of a home crowd. Archive photo via Satiro Sodre/SSPress.

Preview: Raia Rapida Set To Blast Off In Rio On Sunday

Felipe Franca and Nicholas Santos each won their respective strokes as Brazil dominated the 2015 Raia Rapida sprint meet in front of a home crowd.

Brazil also won the medley relay, finishing with wins in 3 of the 5 events. That gave them 15 total points, beating the United States by 4 overall. This is now the second-straight year Brazil has won the event and they become the first-ever repeat winners – Australia won in 2013 and the U.S. took the inaugural meet in 2012.

A quick note on the Raia Rapida meet format:

Brazil clung to a narrow 9-7 lead over the U.S. heading into the relay, but that was enough to clinch at least a tie as long as the home team finished second or better. It turned out, though, that no one could touch Brazil in the overall relay, which they won in 1:38.06.

The United States was second with a 1:39.46, followed by South Africa in third and Italy in last.

Most of Brazil’s lead came from butterflyer Nicholas Santos, who was untouchable all day. He won the individual 50 fly by a landslide, coming to just over a tenth off his season best at 23.08. American Giles Smith (24.80) was the other finalist.

Anthony Ervin took the lone win for the U.S., going 22.43 to win the freestyle. He denied a third straight win to the Brazilians, with the other finalist, Henrique Martins, going 23.10. Martins was a late addition to the lineup, taking over for Matheus Santana after Santana pulled out with illness.

South Africa’s only win came in the backstroke, where Gerhard Zandberg went 25.19 to barely touch out American David Plummer (25.26).

Below are the full finish orders of each event, based on each swimmer’s round of elimination. You can find full results of each round here.

Another very slow time for Ervin . he will have problems at trials in the 50 if he doesn’t improve his start . The likes of Dressel or Adrian won’t do that mistake .

I think something happened to him this year. He is a lot slower than the last year and the year before, hopefully he will be in shape, if not that opens the door for guys Like Dressel. I would love to see Dressel in the olympic team, worth noticing his time in the 50 this year would’ve earned him the silver medal in London

The odds are towards Dressel.
The two last 50free winners were very young(21years-old). I expect al least one of the three young sub22 sprinters(Dressel,Sedov and Proud) in the mix for medals with the big guns next year.

I think Ervin has fallen off the age cliff. He is 34 years old and swimming is not the kind sport where you can afford to lose a couple of percent in terms of ability. This was always going to happen at some point.