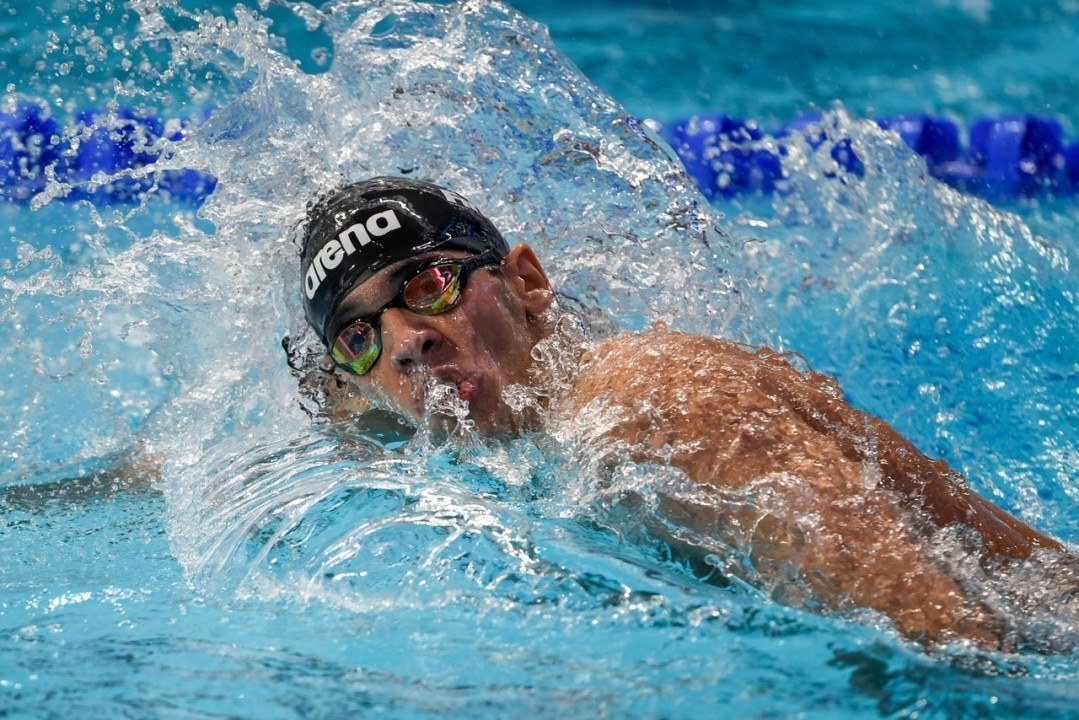 Ahmed Akram snagged two gold medals on the second to the last night of the 2015 All Africa Games in Congo. Archive photo via Peter Sukenik/www.petersukenik.com

Some exciting finishes marked day 5 of the swimming competition of the 2015 All Africa Games taking place in Brazzaville, Congo.  Just one more day to go in the pool, as the swimming events conclude tomorrow, September 11th.

Egypt followed up its double gold session from yesterday with an additional four gold medals tonight.  Ahmed Akram clinched victories in two events, registering a new national record in one of them.  First, he swam his way to a gold medal in the men’s 200m butterfly event, clocking 1:58.87.  This overtakes his old Egyptian national record of 1:59.70 Akram has held since the 2013 Belgian Championships. Akram stepped atop the podium again tonight by cruising to the wall first in the men’s 1500m freestyle race in a winning time of 15:11.58.

Egypt’s third gold on the night came in the form of Farida Osman‘s 50m freestyle victory.  Osman rocked a 25.12 to top silver medalist Karin Prinsloo from South Africa, who would touch in 25.79.  Osman won the 100m butterfly last night and also won the women’s 100m freestyle race earlier in the competition.

Team Egypt racked up another gold with its win in the 400m mixed medley relay.  Their time of 3:56.04 was swift enough to touch out the 3:56.27 mark made by the South Africans tonight for silver.

Another key win came from Zimbabwe’s Kirsty Coventry, who claimed gold in the women’s 200m IM in a time of 2:16.05.  The win represents Coventry’s 2nd event in which she has won three consecutive All Africa Games’ titles after already accomplishing the feat in the 100m backstroke.  Coventry will try to make it a triple three-peat as she takes on the 2oom backstroke field tomorrow, the final day of swimming competition in Brazzaville.

Watch out for this kid. He’s going to be big.

Egypt is good…. But where are they during the Olympics