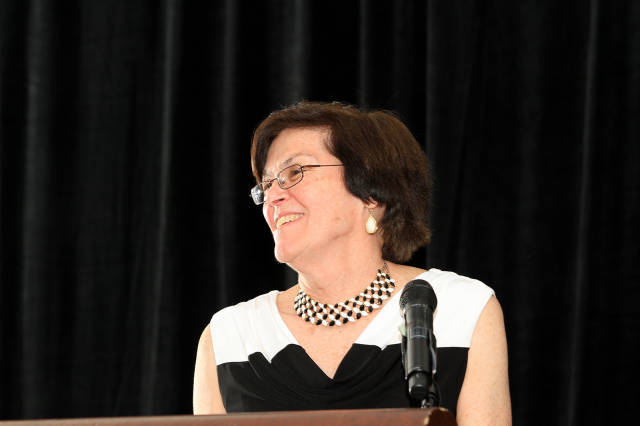 Former Tribe standout Peggy (Lawlor) Hutchinson ‘75 was one of six former coaches/athletes inducted into the College of William and... Current photo via Wlliam & Mary Athletics

Former Tribe standout Peggy (Lawlor) Hutchinson ‘75 was one of six former coaches/athletes inducted into the College of William and Mary’s Athletics Hall of Fame on April 11th, 2015.

The video above includes both her introduction and induction speeches.

The following is a thumbnail sketch of her career accomplishments.

Peggy (Lawlor) Hutchinson, Women’s Swimming, 1971-1975
An true pioneer of the women’s swimming program, Peggy was touted by her coach (Chris Jackson) as THE premier swimmer to come out of program during its begging stages.

She was a remarkable 10-time All-American (six individual, four relay), competing on the highest available level of collegiate swimming (AIAW) for the time.

In all, she qualified for Swimming Nationals each of her four years, placing seventh in 100-yard Butterfly in both her freshman and sophomore years, against what would be considered the equivalent of the nation’s best competition (NCAA Division I-A).

Additionally, she Swam on three of the four qualifying relays that placed at Nationals in her sophomore year and was member of first W&M relay squad to reach the meet finals (top six).

Dang I hope I never have to compete in a 500 fly, and I’ve never swum a 400 scy free before. Unless it was a relay of course.

Awesome honor for a great athlete and one of the best swimming parents I’ve had in my career as a coach!!!