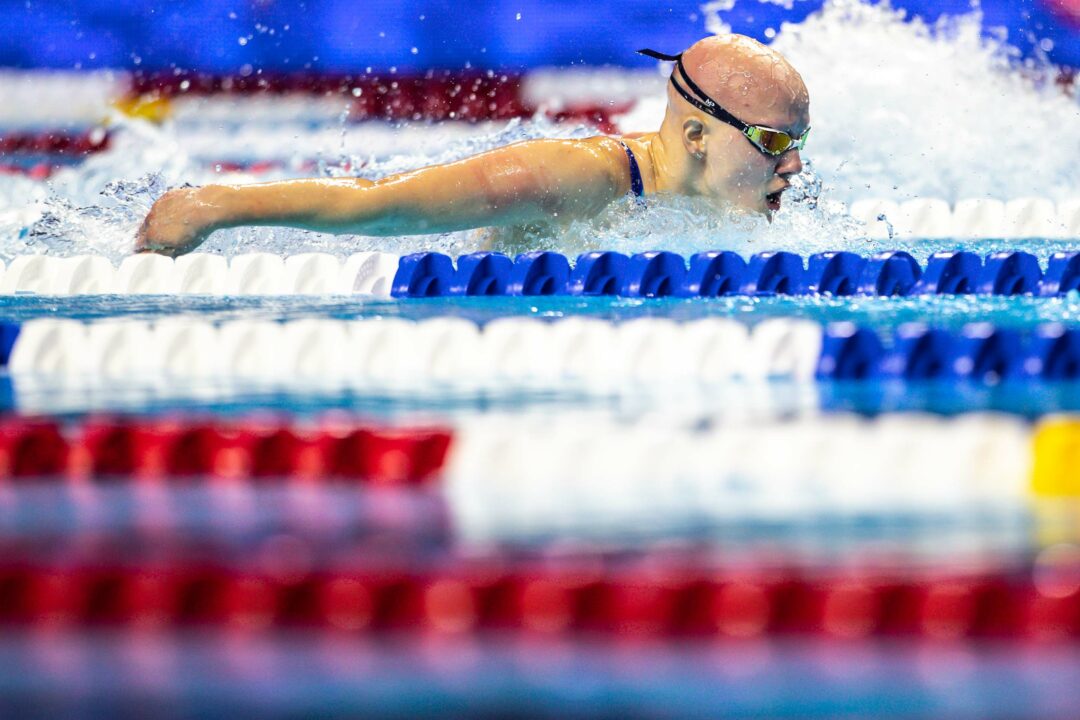 Leah Hayes set the IHSA state records in both the 200 IM (1:56.62) and the 100 free (48.41) on Friday, shortly after coming off her FINA World Cup stops. Archive photo via Jack Spitser/Spitser Photography

Illinois’ top high school female swimmers stormed the FMC Natatorium on Friday afternoon to compete at the 2021 IHSA girls swimming & diving state meet. This is the first time in IHSA History that the state competition will be held in Westmont’s new facility, which features 27 lanes of usable space and seating for around 1,200 spectators. Previously, because of a rule in the state that the meet must be hosted at facilities with seating on three sides, it used to be on a hosting rotation between New Trier and Evanston High Schools: older pools that didn’t necessarily maximize athletes’ speed, were shallow, and/or lacked warm up/cool down space.

Illinois hasn’t hosted a high school state competition since March of 2020, and between that pent-up energy and faster water, the athletes went big in the new facility’s first state championship hosting duty. There were a total of five individual IHSA state records broken at Friday’s prelims session.

In the first individual event of the evening, sophomore Annika Parkhe dominated the 200 freestyle (1:46.15), splitting 52.0/54.1 to break Rachel Stege‘s state record (1:46.66) from the 2019 state meet. Stege won a bronze medal for Team USA in the 400 free at the 2019 World Jr. Championships and is currently a freshman with the University of Georgia.

In the 100 fly, Parkhe took advantage of her underwaters to break Olivia Scott’s 100 fly state record (53.09). With that swim, Parkhe becomes the first Illinois female swimmer to break 53 seconds in the event (52.72). Prior to Friday, Parkhe’s best time was 54.64, a time she had gotten 6 days earlier at the IHSA Sectionals in Lake Forest.

The sophomore class continued to dominate as Leah Hayes set two state records as well. Hayes was nothing short of dominant in her 200 IM, as she led wire-to-wire and knocked 3.5 seconds off the previous IHSA record. Hayes (1:56.66) is now the first female swimmer in IHSA history to break 2:00 in the 200 IM. The previous state record was held by Maine South’s Annika Wagner (2:00.23) who now swims at Northwestern.

The final state record of the night was set in the last individual event: the 100-yard breaststroke. New Trier’s Kaelyn Gridley took advantage of her seeding and was out in a blistering 28.41, which was the fastest leadoff 50 in the entire field. She held her stroke together through the finish, splitting a 31.51 on the back 50 to break 1:00 for the first time in her career. Gridley’s 59.92 marks her as the only Illinois female swimmer (in high school competition or otherwise) to break 1:00 in the 100 breast. Her 1:00.45 from earlier this year was the former LSC Open Record.

Ema Rajic, who competed at the 2020 Tokyo Olympics with Croatia, held the previous state record at 1:00.77. Rajic also competed for Cal, where she’s the school record-holder in the 100 breast (58.45) and helped the golden bears to win the 400 medley relay at the 2019 NCAA Championships.

While Parkhe (DEER) and Hayes’ (KANE) individual efforts were stunning, they most likely won’t have a significant affect on the overall team scores. Based on prelims results, New Trier is expected to win the state title, while Hinsdale Central and Rosary will have a tight battle for 2nd place overall.

Alec Filipovic and Carly novelline will also come back during their freshman year at college to get some more state records!!!!

Super fast swimming! Finals should be interesting. Something to note is some have to also swim very competitive relays, and others have no relays at all. Definitely an advantage not to.

Don’t get me started….

Guessing Leah Hayes could have still won and pulled off a relay… Those with relays also have a team surrounding them, being the only competitor for your school is an entirely different dynamic.