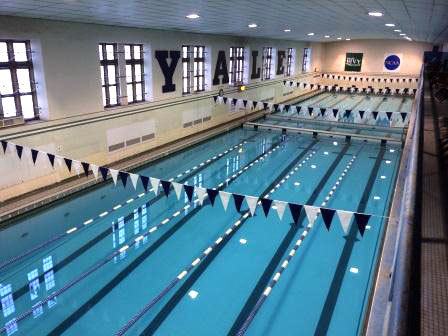 YALE vs. PENN vs. DARTMOUTH

There was an Ivy League showdown in New Haven on Saturday as Yale, Penn, and Dartmouth gathered for a tri-meet. The Yale men and women defeated both opponents, while the Penn men and women earned wins over Dartmouth. As championship season approaches, the Yale women remain undefeated. The men have only one loss to Ivy League rival Columbia.

Yale’s Izzy Henig, the fastest woman in the Ivy League this year in the 50 free, out-touched Dartmouth’s Sophie Smith to win the 50 free 23.66 to 23.76. Smith came back to win the 100 free in 51.40. Henig is also the fastest 100 butterflier in the conference this season. She placed 3rd with a 57.26 in that event, while it was won by teammate Caitlin Tycz in 55.14. Tycz is in her first season with Yale after transferring from USC.

Ivy League Champion Catherine Buroker of Penn brought home a win in the 1000 free, posting the only sub-10:10 to win in 10:09.10. Buroker competed at the NCAA Championships last season and was just the second woman in Penn’s history to do so. Her perfomance moves her up to #7 in the Ivy League this season.

NEW HAVEN, Conn. – The Yale men’s swimming team had a tremendous weekend as it racked up wins against Penn and Dartmouth. The Bulldogs bested the Quakers 160–140 and defeated the Big Green 218–82.

As it has on many occasions so far this season, the Yale relay team was again exceptional this afternoon. The squad consisting of Page, Gaissert, sophomore Philippe Marcoux, and sophomore Nathan Stern took first in the 400-yard freestyle relay with a final time of 2:58.94.

The Bulldogs are back competing next week against Cornell at Kiphuth Pool.

NEW HAVEN, Conn. – The Yale women’s swimming team decisively won against both Penn and Dartmouth this weekend, picking up two Ivy victories. The Bulldogs took down the Quakers 217–83 and the Big Green 229.50–70.50.

The relay team of first-year Jamie Yeh, first-year Jessica Whang, junior Caitlin Tycz, and sophomore Isabelle Henig finished first in the 200-yard medley relay with a final time of 1:43.80. This success was followed by sophomore Raime Jones sweeping the field in the 200-yard freestyle with a 1:50.20 finish.

Junior Cate Sawkins bested her competition in the 200-yard backstroke, finishing with a blazing 2:00.82 time.

In the 500-yard freestyle, sophomore Ashley Loomis was victorious with a 4:57.76 time. Tycz added another first-place finish to her total on the day with a winning 55.14 time in the 100-yard fly event. Sophomore Olivia Paoletti took first in the 200-yard IM event with a 2:07.40 time.

To cap off the dominant afternoon, the relay team of Jones, Henig, sophomore Marlise Moesch, and first-year Ophelia Pilkington were victorious in the 400-yard freestyle relay with a 3:28.50 final time.

The team next faces Cornell next weekend.

NEW HAVEN, Conn. – In its first meet of the new year, the University of Pennsylvania swimming and diving programs both split tri-meets with Dartmouth and Yale. The Bulldogs swept both the Quakers and the Big Green, but Penn was able to head home with a pair of victories over Dartmouth.

Recapping the Penn Women
The Quakers got today’s tri-meet started with a second-place finish in the 200 medley relay. A team of Hannah Kannan, Serena Xue, Monika Burzynska, and Emily Layne combined to clock a time of 1:43.80.

Of the four members of that relay team, two went on to place in individual events later in the meet. Kannan took a pair of second-place finishes. She raced to a 56.59 finish in the 100 back and a 57.22 finish in the 100 fly.

Relay teammate Serena Xue tallied one of Penn’s two victories on the day, topping the field with a 2:20.48 finish in the 200 breast.

Two-time Ivy League champion and 2019 NCAA Championships qualifier Catherine Buroker followed up with Penn’s second victory. The sophomore touched the wall first in the 1,000 free, clocking in at 10:09.10.

Recapping the Penn Men
The Quakers nearly repeated last year’s sweep in the Yale & Dartmouth tri-meet in today’s installment. In the 2020 opener in New Haven, the Quakers won six events and had 19 swimmers place within the top three.

Junior Sean Lee continued to command within the water. After leading the Quakers with seven event victories at the Miami of Ohio Invitational, he stayed hot with three individual victories and a relay win.

Yang—a second-team All-Ivy honoree last year—also excelled in today’s meet. He coupled the second-place finish in the 200 IM with a pair of victories in both breaststroke events. He reached the wall in 56.83 in the 100 breast and beat out the field with a time of 2:02.69 in the 200 breast.

In Friday night’s diving events, John-Michael Diveris and Trevor Nelson each posted top-three scores to earn the Quakers some crucial points. Diveris—who had won the 3-meter dive in each of Penn’s five events prior to today—finished second in the 1-meter (274.75) while Nelson finished third (271.95).

Up Next
The Quakers will round out the Ivy League regular season back at home as Penn hosts Harvard next Saturday at noon.

To end the weekend, the Big Green placed fourth in the 400 free relay (3:05.15). Composed of LaMastra, Landon Armstrong, Park and Hall, the relay out-touched Yale by three seconds.

Next Saturday, Dartmouth will compete against UConn in Storrs.

To end the weekend, Dartmouth was second in the 400 free relay (3:30.42). Made up of Pionzio, Katherine Cane, Wortzman and Smith, the relay left two seconds behind it.

Next Saturday, Dartmouth will compete against UConn in Storrs.