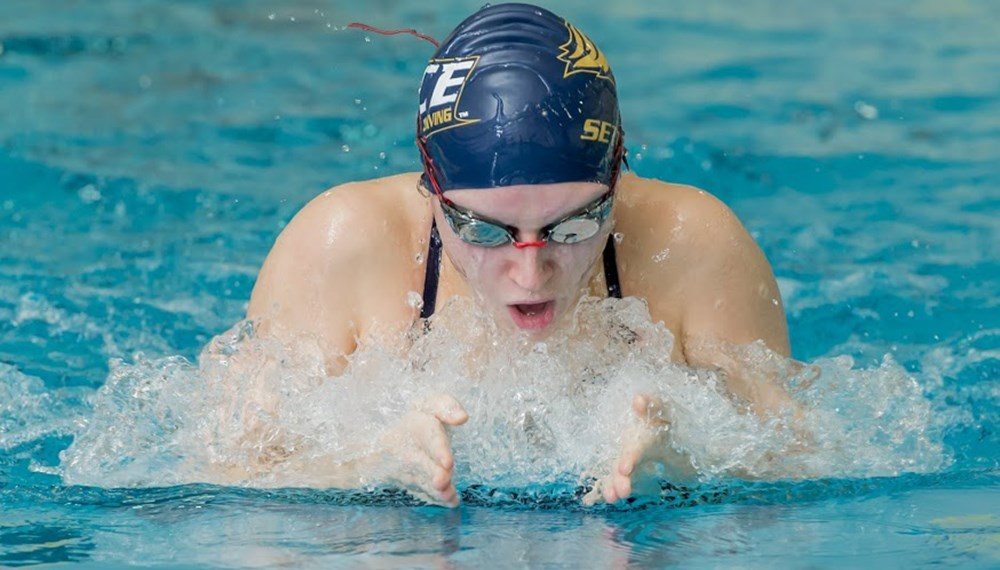 Seeing their final competition of the fall semester, the Pace University women's swimming and diving team earned a 134-76 over Saint Peter's on Saturday afternoon. The Saint Peter's men won their fifth straight meet with 139-75 victory over Pace. Current photo via Pace Athletics

JERSEY CITY, NJ – The Saint Peter’s men’s swimming & diving team won its fifth straight meet on Saturday with a home win over Pace University, improving the team’s record to 5-0 on the season. The women’s team was defeated by Pace at the meet.

The meet concluded the 2018 portion of the schedule for the Peacocks.

The teams return to action in the new year, beginning 2019 with a meet at Wagner on Friday, January 4 in Staten Island.

JERSEY CITY, N.J. – Seeing their final competition of the fall semester, the Pace University women’s swimming and diving team earned a 134-76 over Saint Peter’s on Saturday afternoon. The victory sends the Setters into 2019 with a dual record of 3-1.

Kosakowski and Franklin also registered victories for the Blue and Gold on Saturday. Kosakowski clocked in first in the 50-free (24.96), while Franklin tallied the top time in the 500-free (5:31.21).

In the Setters’ final meet prior to the new calendar year, the Pace University men’s swimming and diving team was defeated at Division I Saint Peter’s University on Saturday afternoon (139-75).

Daniel Galarza (Edison, NJ/John P. Stevens) continued his stellar senior season with two more wins against the Peacocks. The Pennsylvania native notched top times in the distance events, winning both the 1,000 (9:44.53) and 500-free (4:45.07).

The Setters’ point total was also supplemented by a trio of second-place finishes. Sophomore Joshua Lozano (Helotes, TX/O’Connor) nabbed the silver in the 200 IM (2:02.93), while freshman Samuel Gibson (Nassau, Bahamas /Saint Andrew’s) placed second in the 100-free (48.41). Gibson also finished third in the 50-free with a time of 22.90.

Turecky also posted a third-place performance in the 200-free, swimming to a time 1:51.72.

Up Next
The Setters will enjoy more than a month off before returning to action in the New Year. Pace will host Bentley University on Jan. 19.