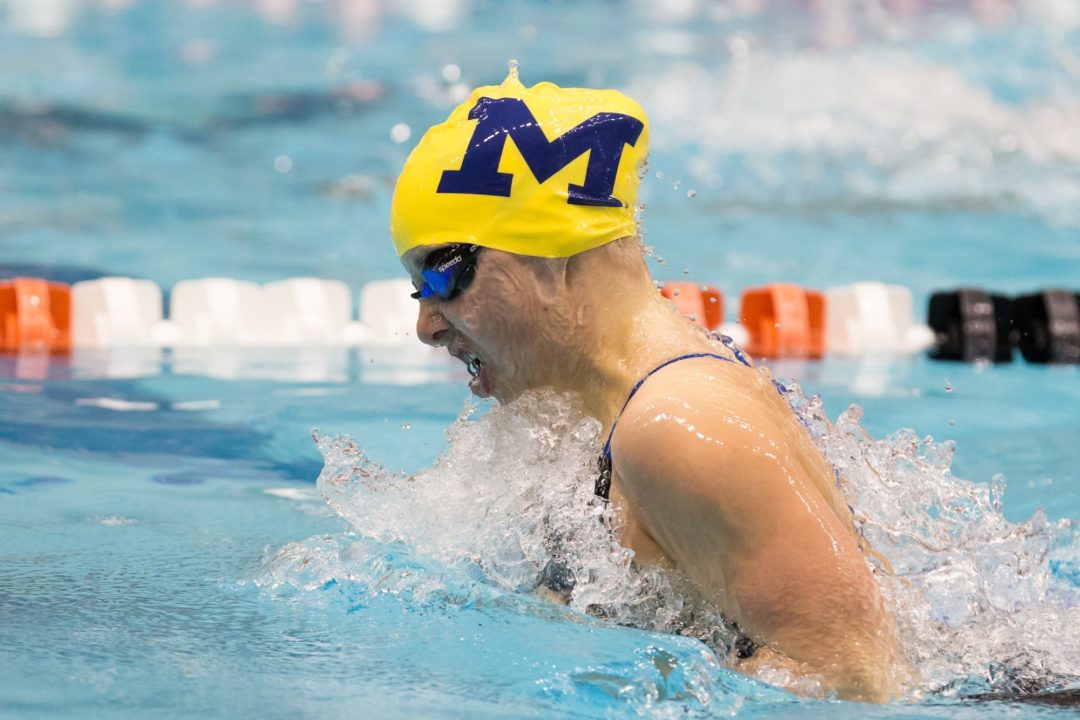 The Michigan women swept all 12 races at the short course meters event, including two wins and a meet record from Marni Oldershaw. Archive photo via Tim Binning/TheSwimPictures.com

The men and women Michigan won the 2014 Orange Bowl Classic, continuing a run of five straight years as victors for the men and making two in a row for the women.

The meet is unique for several reasons, most notably that it is swum entirely in short-course meters. It takes place each year in Key Largo, Florida as part of the festivities surrounding the annual college football bowl game. This year the meet included Michigan, West Virginia, Saint Leo, George Mason, and the women from Vermont and Florida International.

Overall, the Michigan women looked like a far better team than the one that competed at this meet a year ago, a visible step forward for coach Mike Bottom’s program. The men on the other hand were a noticeable margin behind their performances from a year ago, although that’s probably less of a concern considering how on-fire the Wolverine men were week in and week out last season.

The Lady Wolverines swept all 12 events at the sprint-oriented meet, which featured 50s and 100s of each stroke as well as the 200 and 400 frees and 400 IM. The 200 distances of both medley and free relays were also swum.

Michigan sophomore Ali DeLoof won two events and also broke an Orange Bowl Swim Classic record. She went 28.69 for a meet-record win in the 50 back, then came back to go 26.60 for a 50 free win, just a tenth off her second meet record.

Fellow sophomore Marni Oldershaw also won two events, breaking a meet record in one. She went 1:12.22 to nip her teammate Angie Chokran for the 100 breaststroke win , then went 2:16.47 to crush the field in the 200 IM and smash the old meet record.

Zoe Mattingly was the other individual record-breaker for the Wolverine women – she won the 50 fly, going 28.23.

Mattingly and DeLoof combined to help Michigan win both relays – the team of DeLoof, Chokran, Mattingly and freshman Julia Salem went 1:54.31 to win the 200 medley (a new meet record) and Salem, Mattingly, Maddie Frost and DeLoof won the 200 free relay in 1:45.65 (another Orange Bowl mark).

Florida International took third in both relays behind Michigan’s A and B teams, big points that helped lead to a second place team finish.

Michigan’s only major lineup hole as it tries to defend its NCAA title is sprint backstroke after graduating Ortiz’s older brother Miguel. West Virginia senior Bryce Bohman was able to exploit that weakness, winning both backstroke races for the second-place Mountaneers. The redshirt senior continued his great season, going 55.89 to win the 100 back and 25.36 in the 50 to win by a full second and crush a meet record.

Michigan went 1-2-3-4 in the 400 free, the longest event of the meet. Connor Jaeger was the victor in 3:55.62, while Anders Nielsen, Cameron Stitt and Sean Ryan rounded out Michigan’s swepp.

Senior John Wojciechowski took home the 50 fly title in 24.47, and Dylan Bosch won the 100 fly in another 1-4 Wolverine sweep. Bosch was 54.35 followed by Pete Brumm, Kyle Whitaker and Keltan Lawler.