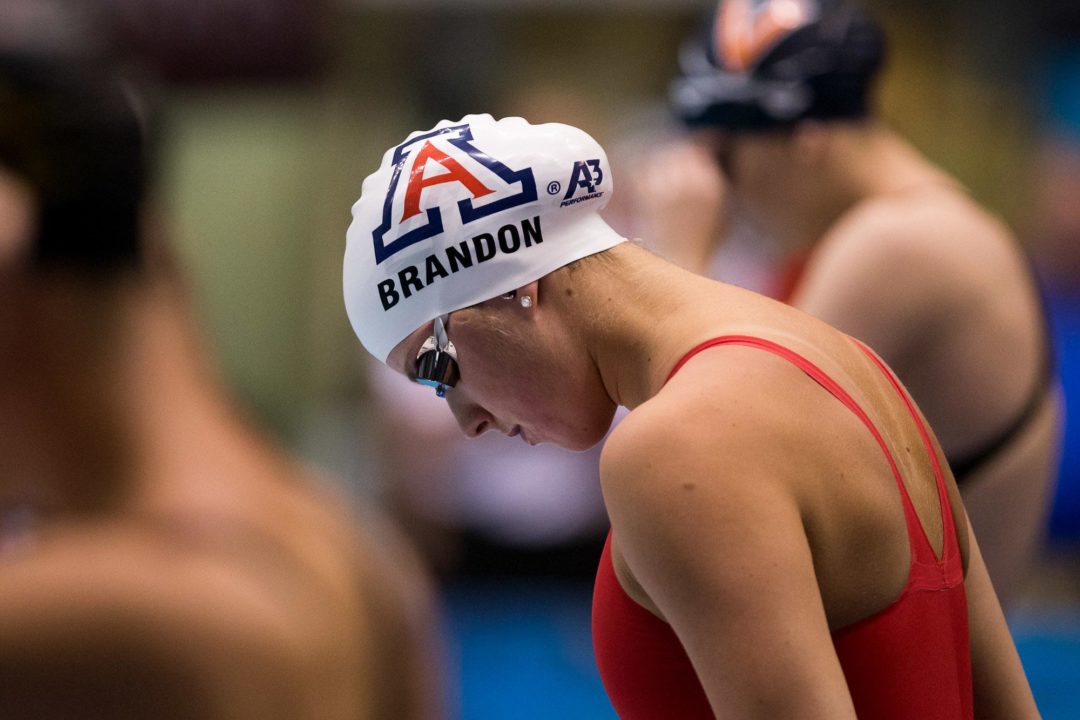 Bonnie Brandon (above) and Elizabeth Pepper led the Arizona Wildcats to a resounding victory. The meet will be televised on Saturday. Archive photo via Tim Binning/TheSwimPictures.com

In the 16-event, no-diving, women’s meet, the Wildcat women looked solid in their 2014 debut. This was the first televised meet of the 2013-2014 season on the Pac-12 network, and it will be televised on all of Pac-12’s 6 regional networks at 5PM Pacific Time on Saturday, January 4th. The Widlcats for the last two months-or-so have been under the guide of Rick Demont, with no word from those close to the Arizona program on a potential return of head coach Eric Hansen, but there hasn’t yet been any noticeable drop-off in season plan or performance.

Bonnie Brandon opened the action up with a 9:59.67 in the women’s 1000 free to top Oregon State’s best swimmer Sammy Harrison, who was second in 10:07.30. As the Wildcats get back into their heavy workload, with another taper for Brandon not likely coming until NCAA’s, her times weren’t quite as good at this meet as we’ve seen this time of year from her in previous seasons. She also won the 200 free in 1:49.61 – which is the slowest time of her collegiate career. Note that she didn’t swim the 200 or the 1000 at this meet last season, so there’s no great comparison point.

Arizona’s other big star, Margo Geer, was absent from this meet. Her fellow Wildcats sprinter Gracie Finnegan stepped up well to cover those events, though, as she won the 50 in 23.50 and the 100 in 51.36. Finnegan is generally a big ‘taper swimmer,’ and after swimming very well at the Texas Invite a month ago, those times are positive results for her right now.

Sophomore Emma Schoettmer swept the breaststroke races, going 1:02.71 in the 100 and 2:14.86 in the 200. As has been the name-of-the-game for Schoettmer this season, that’s huge improvements year-over-year as compared to last season (as much as six seconds better than she was in the 200 breast at this same meet in 2013).

Schoettmer also split a 28.39 on the breaststroke leg of Arizona’s 200 medley relay, which was swum without either Geer or Brandon. Finnegan anchored that relay in 23.1, and they were joined by Katja Hajdmak (24.6 on the fly leg) and Alana Pazevic (25.8 on the back leg) for an easy win there.

Elizabeth Pepper, a transfer from Florida State, continues to adapt very well to her new training. She was a 1:59.75 to win the women’s 200 fly over a 2:00.29 from teammate Ashley Evans. For Pepper, who is strong enough to swim well through heavy training, this was faster than she was the entire fall semester outside of the Texas Invite (where Arizona was on a significant rest). She also topped the 100 fly in 55.66, which is good speed for the normally distance-oriented junior.

Arizona finished the meet with a 1-2-3 finish in the 400 free relay, splitting their best swimmers among the three relays. The best split of the night was a 50.9 from Pepper to anchor the Wildcats’ ‘B’ relay, which won in 3:27.41. More evidence that Pepper is swimming very well off of holiday training.