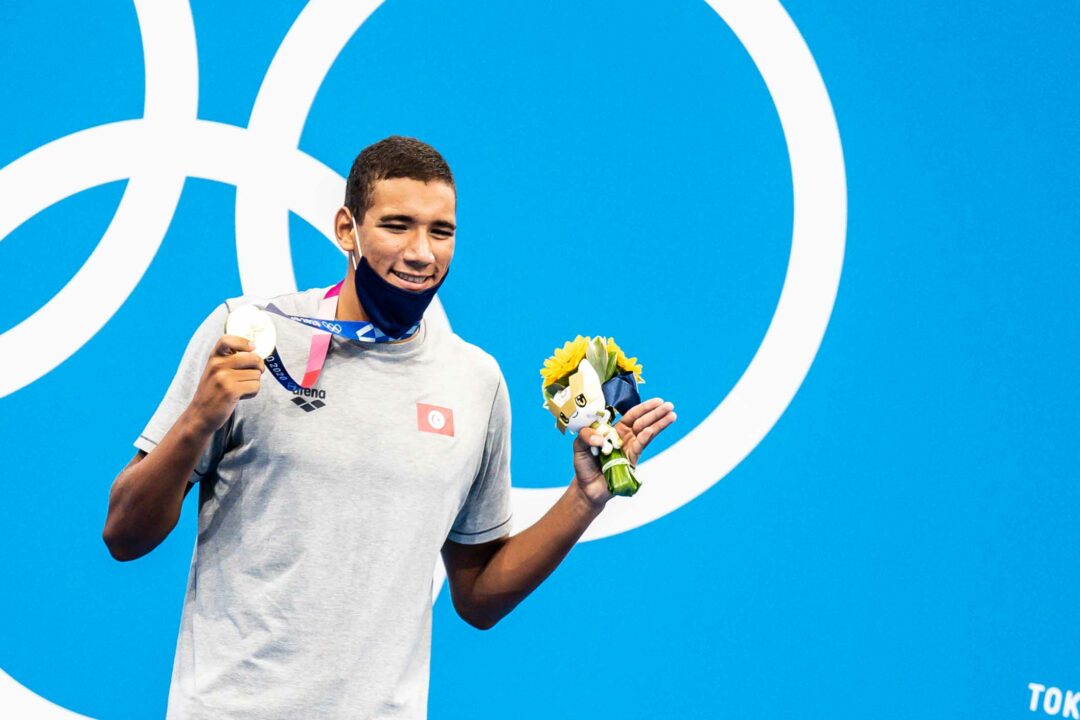 Tokyo 2020 Gold medalist Ahmed Hafnaoui has announced his commitment to Indiana for Fall 2022. The Tunisian 18-year-old was arguably the biggest dark horse Gold medalist of the Tokyo Olympics, winning the men’s 400 free on the first night of the Games.

“I am happy to announce my commitment to Indiana University! I want to thank my family and coaches. I am very excited to swim in the NCAA! Go Hoosiers”

Hafnaoui had an electric performance in the 400 free in Tokyo, first swimming a personal best in prelims (3:45.68) to grab an outside lane for finals. In finals, the teenager was on the race from the start, flipping in 3rd at the 100m mark, then moving into 2nd until the last 50, where he unleashed a field-leading 27.23 to edge out Australia’s Jack McLoughlin for Gold. The swim marked Tunisia’s first Olympic Gold medal in the 400 free, and Hafnaoui became of the few teenage medalists in Tokyo.

Hafnoui is a freestyle specialist, and could be an immediate star in the NCAA distance free events. Here are his lifetime bests in meters, along with conversions to yards:

Hafnaoui’s LCM 400 free converts to a 4:10.34 SCY 500 free, which would have ranked him 6th in the NCAA last season. His SCM 1500 time of 14:36.12, which is nearly 2 years old, converts to a 14:30.89 SCY 1650, which would have been the 3rd-fastest in the NCAA last season. It’s unclear exactly what the NCAA field will look like for the 2022-2023 season as of yet. Florida’s duo of Kieran Smith and Bobby Finke could potentially take 5th years, in which case they would be competing for the Gators during Hafnaoui’s freshman year. Smith is the current NCAA record-holder in the 500 free, while Finke is the NCAA record-holder in the 1650 free, and won Gold in both the 800 and 1500 freestyles at the Tokyo Olympics.

Either way, Hafnaoui will provide a huge boost to the IU freestyle group, which is currently led by American Olympian Michael Brinegar. Mikey Calvillo, who was the Hoosiers’ fastest 500 freestyler last year, is a senior this season, which means there’s a possibility he’ll be back for a 5th year in 2022, but it’s unclear as of now

Gurrera is going to have a field day.

And Hoosierdaddy. This is going to be good.

Props to you for getting on that so fast because I wanted to be the one to do it. 🙂

Meh, he’s got some fast times, but I don’t know if he can step up at a big meet like Big Tens or NCAAs.

Olympics is obviously the biggest meet there is

Nah 5th in the NCAA is pretty generous for an Olympic gold medalist.

but the NCAA are much togher than any OG… also the 200 breast NCAA record translate to 2:04 200 breast LCM.

Can´t remember who did the first quote..

Was not expecting this

But you should have. He wants to become elite in the 400 LCM breast.

Loose was talking to him at the Olympics, I remember that.

I vividly remember someone mentioning this as well

Isn’t that a recruiting violation during the meet?

It sounds like it should be, but I don’t know for sure.

Wouldn’t someone have to have knowledge of the content of the conversation or is any contact considered a recruiting violation.

I’m an international and just curious, no sarcasm intended.

Not if it is after his last event for the day.

Was talking to coach, not swimmer. Straight cap.

Yeah I went back to my comment on the day 1 article from a year ago, it was the kid’s coach and not him.

month ago not year

I recall seeing Loose talking to his coach right after the event. Never saw him talking to Ahmed though. Not familiar enough with the recruiting rules, but I suspect that might be allowed?

I didn’t see anything about anything, but yes, Ray would definitely be allowed to talk to his coach.

Coaches are not supposed to have off-campus contact on a “game day.” Which, I guess the Olympics count as? The rules are a little nebulous and vague, but generally, a casual and brief “hello, how are you, how are your parents, congrats on the great swim” seems to be fine.

There are always loopholes. Remember how Maggie entered the transfer portal a year early, and that meant that Rick Bishop, who was no longer a coach at Michigan, and who wasn’t on the Canadian staff, could coach her during the Olympics?

I was hoping to see him go to Florida

Was thinking similar but I had him decomitting and recomitting to Michigan. Its what good D-swimmers do (see Felix Aubock)

Correction: it’s what good D-swimmers did…if you’re gonna transfer, you go to the school that produced 2 golds and a bronze, not the one that produced a 4th and two 7th’s 😛

OMG! This is glorious…like manna from heaven! I haven’t updated my Indiana poem to include this year’s Olympic results, yet. But God bless Ahmed, God bless the Indiana Hoosiers and God Bless my friend, my mentor and my spiritual advisor, GOAT Coach Ray Looze! Today is a happy day and I will celebrate with beer and Stromboli’s at Nicks tonight while wearing my Ray Looze “Hall of Fame Coach” t-shirt. May all of my friends and detractors experience the joy I have at this moment for my Indiana Hoosiers!

Here to watch Ray throw his clipboard when a swimmer seeded top 16 winds up 28th in prelims….

So Nick’s is still there in Bloomington after all these years? Haven’t been back there in a long time.

It is in all it’s glory. And when you come back to town let me have the honor of buying you your first drink!

Thanks for the kind offer.

And IU still won’t be top 5 a men’s or women’s ncaas! Texas B men’s team would beat IU!

The biggest question on everyone’s mind is whether Guerra or Hoosier Daddy is Ray Looze. I’m going with Guerra because I think Ray would be an eloquent writer.