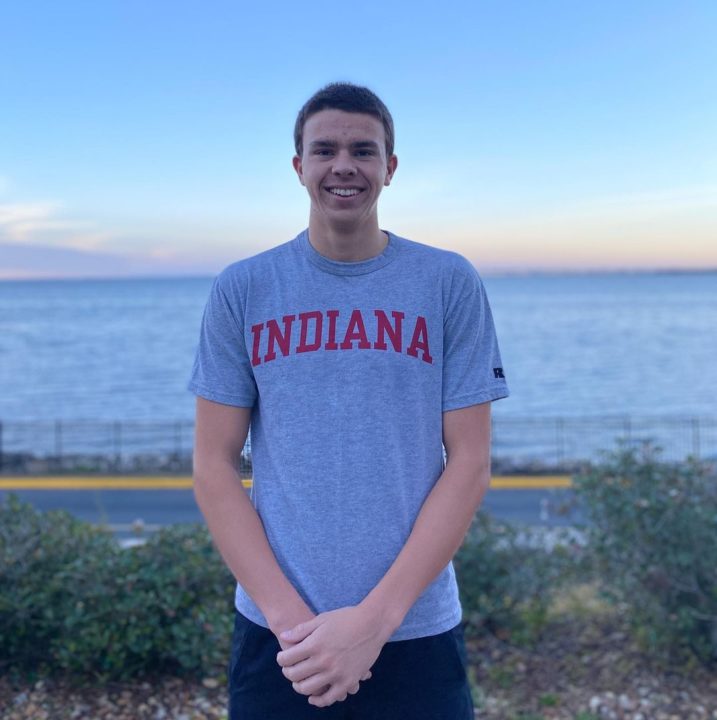 Herrera has demolished his personal bests in the breaststroke events since spring 2020, and he was a Florida 1A 100 breast A-finalist in November. Current photo via Harry Herrera

Harry Herrera of the Bolles School Sharks has verbally committed to Indiana University for fall 2022 after an incredible improvement year in 2020.

Wicked excited to announce my verbal commitment to swim at Indiana University. Thanks to my family, friends, and coaches for helping me get here. Go Hoosiers! 🔴⚪️

Herrera has had an absurd progression curve in the last year. He had barely gone under a minute in the 100 breast until this summer, when he started chipping away at his pre-pandemic best of 59.51. He was 59.40 at a Bolles intrasquad in July, then 57.95 a few months later in October.

During the Florida high school post-season with Bolles, Herrera first went 57.66 at districts, then 57.34 at his region championships. At the Florida HS 1A State Championships, Herrera blew past 56, going 55.94 in prelims and then 55.79 in finals to take third overall as Bolles swept the top three spots at the meet.

That boy has massive hands! Get swimming asset!!

Damn! Those are some big mitts. He could be a catcher in MLB and not need a glove!

Congrats! We’re thrilled to have you. I wrote a history of IU swimming and diving in an earlier post, but it must have been moderated out for some reason.

Harry, my man! Congratulations on your decision. To just say that we’re thrilled to have you would be an understatement! I hope that you end up loving Indiana University as much as I do. If you love Indiana University, it will love you back and take you to places and to heights that you never dreamed were possible. I told that to GOAT Coach, Ray Looze, and his lovely wife, Kandis, when they arrived in Bloomington in 2003 and they have fully embodied that statement since that very day. In case you didn’t know some of the history of Indiana University swimming and diving, let me fill you in…. In the beginning, God created Bloomington, Indiana. In the middle of… Read more »

Congrats to Harry!
But I’m mostly here for the Guerra comments.