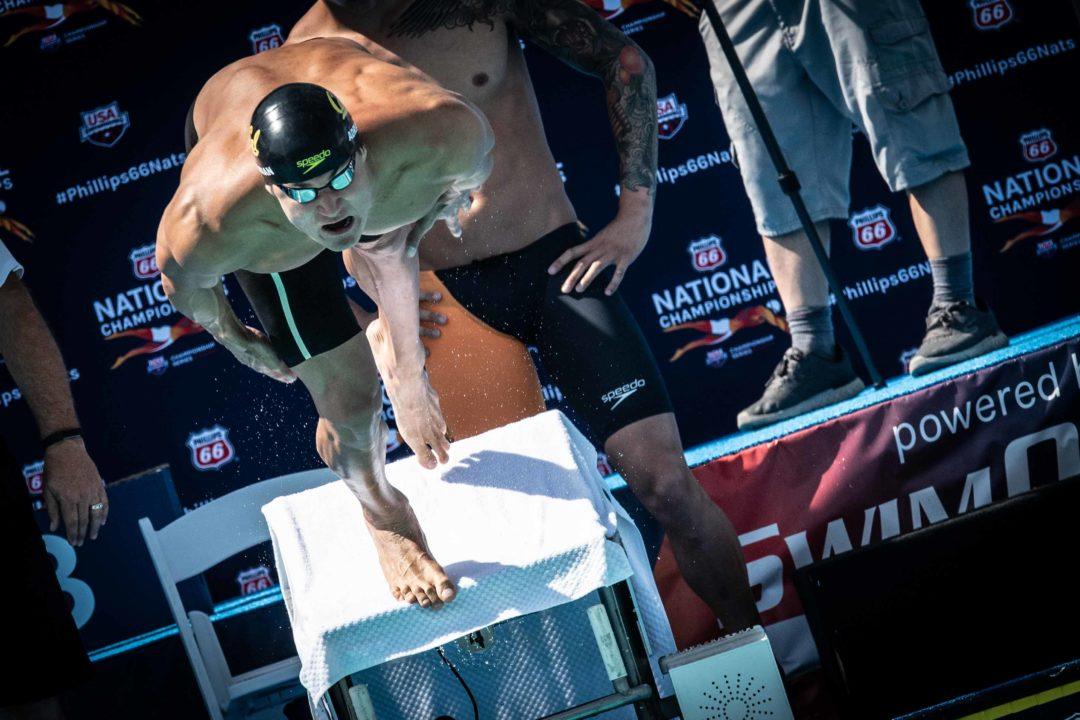 Winter Nationals marks the opening of the qualification period for the 2020 U.S. Olympic Team Trials – Swimming, the sole qualifier for American swimmers for the pool competition at the Olympic Games. Following timed finals of the 800-meter freestyle on Nov. 28, the next three days of long-course competition feature morning prelims at 9 a.m. ET and finals at 5 p.m. ET. 2020 Olympic Trials time standards can be found online here.

NBC Sports and USA Swimming will feature daily coverage from Greensboro, including live finals broadcasts on the Olympic Channel on Nov. 29 and Nov. 30. A live stream of daily prelims and Dec. 1 finals will air on usaswimming.org. Following a taped Dec. 2 broadcast on NBC Sports Network, a one-hour package from Winter Nationals will air on NBC on Dec. 16 at 3 p.m. ET.

Guessing Franklin isn’t training seriously anymore and not going to any meets in 2019. Does she think she has a shot for 2020 still??

She hasn’t made any “announcements” so she’s may be still swimming.

She has a sports management team that handles her, so you’ll hear about it if she retires.

Not with the talent coming up. It’s been 5 years since she was a serious contender. Time to let it go

She was on podium in Kazan three years ago. She was 1:55 in 200 free at OT two years ago. I agree it is not enough now when high school girls swim 1:54 but it is still a respected time.
When I saw Ye Shiwen earning some money at World Cup I though about Missy Franklin. Both girls being 16 and 17 years old respectively made phenomenal world records in London and then couldn’t make finals in Rio. But Shiwen is still earning some money by swimming and Missy looks like has chosen other way of making living.

I agree with you both. I think it’s time for her to let it go, according to her social media she’s always traveling/with her fiancé and with family.

She is done….you won’t see her racing anymore.

Well she bought a house in Athens, Georgia…sounds committed.

That is the chance for Katie Ledecky to get back #1 position in 200. Hope this is the reason for her to compete in this meet.

I just kind of skimmed the article, so don’t roast me, but will be Meet be long course for prelims and finals or just finals

Long course for both. Timed finals for 800 and 1500, otherwise prelim/finals with A, B and C finals

You raise an interesting issue. Have never heard of switching lengths (SC to LC or vice versa) between prelims & finals, has anyone else? That would be interesting or even kinda strange.

@coachmike they do that for some meets in florida like nasa champs and NCSA..

Thanks, was not aware. Much appreciated.

NCSA Jr. Nationals does this in the two years before Olympic years so swimmers can get their Trials cuts at night

They aren’t doing it this year though, just next.

It actually becomes quite common as Olympic Trials becomes closer and closer. I know many of the Sectionals meets around the country follow this format.

Agree with you all. There is an additional nuance as well until recently in Virginia and North Carolina that we have been very limited with 50 Meter Pool Venues historically and the elites were traveling far to get in the big water. Training in the Long Course dimension used to be virtually non-existent. Virginia Swimming used to be so limited that we were having our LSC State Championships in Cary, North Carolina!

However, swimming has had somewhat of a renaissance in the region in the last 15 years with the construction of:
– University of Maryland Aquatic Center
– George Mason University- Fairfax and Manassass Aquatic Centers, yes, x2
– Quantico – QDD Swim Club
–… Read more »

And the Jeff Rouse facility in Stafford, too.

Yes… they have done that at national level meets in Canada and even the university champs this year will be like that.

They do this at our local championship meets in the spring.