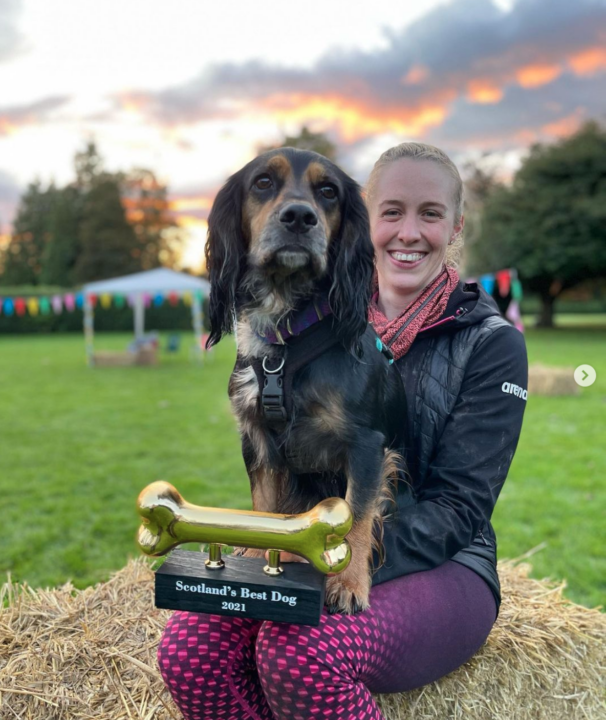 To go from Shoulder rehab in January, trying to qualify for a 4th Olympics, buying our first house, retiring from competitive swimming and now winning Scotlands Best Dog. Safe to say it’s nice to finish the year with a super waggy tail and a big smile 😊🐶

Who knew when we signed up for the show in August we’d end up making it through to the final, and then to come home with the Golden Bone!

When we first got Poppy just before Christmas in 2019 #dogsareforlifenotjustforchristmas I made a promise that I would do right by her. Spaniels are known for their boundless energy, working on trick training and exploring different games and walks gives her that outlet she needs! Little did I realise I needed that outlet too.

Huge thank you to @bbcscotland @red_sky_productions @kayeadamsofficial @edinburghdogbehaviourist and Adam Grant for the opportunity to be part of the show! Really had fun and glad we got to meet you along with all the different owners and their awesome dogs 🐶🐾

Look forward to what 2022 has in store for us, what other adventures we will go on next 😊

Last video is a bit of behind the scenes homework working on the “find the key” challenge. Poppy is so enthusiastic she brings me anything and everything along with the key 😂”

She attempted to qualify for the 2021 Games but experienced multiple setbacks due to injury. She announced her retirement from competitive swimming at the beginning of the month.

According to their website, the BBC Scotland show features“Proud pet owners and their hopeful hounds compete for the coveted Golden Bone trophy.” The series contains five “preliminary” episodes featuring three dogs each. One dog from each preliminary show made it to the final. In the final, the sixth episode, Miley and Poppy earned the title for Scotland’s Best Dog.

The dogs, along with their owners, were tested and judged in three categories: recall, bond, and agility.

The show can be viewed in the UK here.

Miley has said on her Instagram that Poppy was born on October 10th, 2019, and that she has been the owner of Poppy since a little before Christmas in 2019. She also has said that Poppy has taught her lessons including communication, saying hello in the moment, living in the moment, and setting yourself up for success. Poppy can be seen enjoying the water, just like her owner, in many videos on Miley’s Instagram.