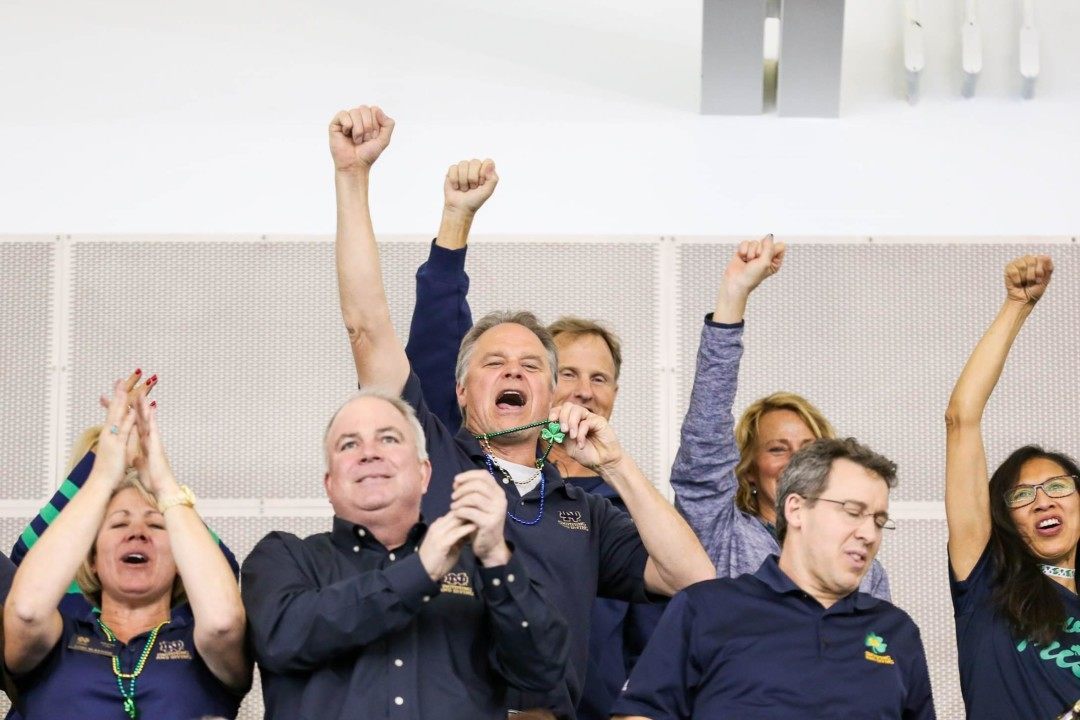 The Notre Dame men's team relied on their sprinters to come from behind on Day 2 to win against the Yellow Jackets, while the Fighting Irish women rolled over the Georgia Tech women's team. Current photo via Tim Binning/TheSwimPictures.com

The Notre Dame men’s and women’s teams traveled to Atlanta, Georgia, this weekend to swim the Georgia Tech Yellow Jackets in a two-day dual meet. The men’s meet was tight, with Georgia Tech taking the lead on Day 1, before losing the meet on Day 2 by 9 points. The women’s meet was less competitive, with a nearly 200 point margin of victory in favor of the Fighting Irish. The format was:

The Notre Dame women’s team was led by a strong group of underclassmen. Their victorious 200 free relay, which won by more than 2.5 seconds, had three freshman swimmers.

The Notre Dame men showed depth in the freestyle races, sweeping the podium in the 500 free and 50 free.

Notre Dame is back in action at home next Friday,when they welcome Purdue, Miami and Rutgers Women at 5 p.m. ET.

NOTRE DAME, Ind. – The No. 14 Notre Dame Swimming and Diving team remains undefeated for the 2016-17 campaign after a big win at No. 22 Georgia Tech. The men were victorious by 181-172 and the women following a strong start on Friday finished big 274-79.

The Men got going early when its relay team of Junior Robby Whitacre, Senior, Trent Jackson Sophomore Matt Grauslys, and Sophomore Daniel Speers earned a first in the 200 Yard Medley Relay clocking at 1:29.77.

Important in their strong comeback was sweeping relays and the Irish came first in the 400 Yard Freestyle Relay. The crew of Sophomore Tabahan Afrik, Sophomore Daniel Speers, Senior Reed Fujan and Junior Justin Plaschka were up to the task with a time of 2:58.42.

All around Head Coach Litzinger was happy his team fought back to come out of Atlanta with the win for his program.

“Our men had their backs against the wall going into today a few points back, but came out firing. The Sprinters carried the day as we took both relays and went 1-4 in the 50 Free. All credit goes to Georgia Tech. as they took us right to the last event. The guys really stepped up and swam a terrific time to call the meet. I am very proud of our guys today!”

On the women’s side they continued a great overall meet after a very strong start to come back to South Bend with a big win. The Irish got started off with a tremendous effort in 1 meter diving. Freshman Andrews earned a first with a 276.23. In second came her teammate Junior Annie Crea with a 260.33 and their teammate not far behind in fourth senior Christine Stitcher earned a 249.75.

Individually Freshman Abbie Dolan took a first in the 200 Yard Freestyle clocking in a time of 1:47.59. Sophomore teammate Meaghan O’Donnell also placed a first in the 200 Yard Breaststroke tapping in at 2:15.03. Earning first place honors in the 100 Yard Backstroke was senior Catherine Mulquin with a 55.10 to round out a great day at the pool for the Fighting Irish and a happy head coach Mike Litzinger.

“The Women continued on track this morning. We had some great performances at the diving end of the pool, and some big swims by Abbie Dolan, Catherine Mulquin and Meaghan O’Donnell.”

Notre Dame action at home Friday, October 28th, at the Rolfs Aquatic Center when they welcome Purdue, Miami and Rutgers Women at 5 p.m. E.T. Georgia Tech men’s and women’s teams will be back in action on Wednesday, November 2nd, when they host in-state rival UGA at 4 p.m. in the McAuley Aquatic Center.

THE FLATS – The Georgia Tech swimming and diving teams recorded a number of personal-best times, as well as four more NCAA ‘B’ qualifying marks on Saturday in its dual meet with the Fighting Irish of Notre Dame at the McAuley Aquatic Center in Atlanta, Ga.

“I’m proud of the way that everybody fought, but obviously we want to win. I think we raced hard and I think we raced with our hearts. I think we saw some really good things. We’ve been working really hard and it was good to be in a fight,” said head coach Courtney Shealy Hart. “That’s what college swimming is all about. That’s what college dual meets are all about. It was tied going into the last relay today and obviously you want to be in the position to win those.”

Highlighted by six second-place finishes, the women’s team fell to the Fighting Irish 274-79 to fall to 2-2 overall in dual meet action on the season.

The men’s team, who had two more wins apiece from both Rodrigo Quadros Correia and Moises Loschi on Saturday, pushed the Irish to the very end before falling in the last race of the day to drop the dual to Notre Dame 181-172. The loss is the first of the season for the men’s team who is now 2-1 overall in dual meets on the season.

The women’s team kicked off Saturday morning with a second-place finish in the 200 medley relay, as the team of Maddie Paschal, Florina Ilie, Morgan Lyons and Chiara Ruiu touched the wall in a time of 1:43.86, a Tech season-best on the year. The unit of Sara Gilbert, Kristen Hepler, Laura Branton and Megan Hansen placed fifth with their time of 1:46.97.

In the 400 IM, the Yellow Jackets went second and third overall, as Hepler recorded a second-place showing with her time of 4:29.38, placing just in front of fellow teammate Kira de Bruyn and her third-place time of 4:30.04.

Sophomore Iris Wang placed second overall in the 200 free with a Tech season best time of 1:49.62, while fellow teammate Ruiu finished in fifth with a time of 1:52.76.

Wang and Kitchens finished third and fourth overall, respectively, in the 50 free event, as Wang’s time of 23.55 edged Kitchens and her time of 23.62 for the top-three finish.

The Yellow Jackets went fourth and fifth in the 200 breast, as Hepler touched the wall in fourth with a personal best and Tech season best time of 2:20.31 just in front of Ilie and her fifth-place time of 2:21.26.

In the 3-meter springboard dive, the Yellow Jackets’ Andrea Demick placed third overall with a score of 265.43, while freshman Carly Doi earned a point for the Jackets’ with her sixth-place finish and score of 239.10.

The relay squad of Mark Keaveney, Loschi, Ben Southern and Aidan Pastel recorded a second-place team finish in the first event of the day, the 200 medley relay, with their time of 1:31.15, while the ‘B’ team of Alex Goerzen, Alex Kimpel, Brad Oberg and Robert Borowicz placed fourth overall with a time of 1:32.77.

Correia, who posted two individual wins on Friday, continued where he left off by touching the wall in an NCAA ‘B’ qualifying time of 1:37.53 for a first-place finish in the 200 free event. His time was also a Tech season-best mark.

Also scoring for the Yellow Jackets in the 200 free was Dan Cohen Solal who earned a fourth-place finish with his time of 1:41.36.

The sophomore followed that win up with a first-place finish in the 100 back event with a time of 48.97, also a season-best mark for the Yellow Jackets. Correia placed ahead of fellow Jacket swimmers’ Goerzen (49.99) and Keaveney (50.19) who finished in third and fourth, respectively in the race.

Loschi posted the first of his two wins on Saturday in the 200 breast event, as he pulled away from the field in the last lap to turn in an NCAA ‘B’ qualifying time of 1:57.89, also a Tech season-best mark on the year. Behind Loschi was Kimpel who finished in second-place in the 200 breast with his time of 2:01.92 and Joseph Portillo who placed fifth with a time of 2:05.33.

Day also earned a runner-up finish in the 400 IM event, touching the wall in a time of 4:00.20 to lead the Jackets, while Williamson picked up a fifth-place finish in the race with his time of 4:30.65 to score for Tech.

Southern placed third in the 100 fly event with a time of 48.72, which is a Tech best this season, while Oberg touched the wall in fifth-place overall with his time of 49.87.

Pastel added a fifth-place finish in the 50 free with his time of 21.04, marking both a Tech season-best mark and a personal-best time for the freshman.

Matt Casillas scored the win in the 3-meter diving event with a season best and NCAA ‘B’ cut score of 360.15. Fellow diver Omar Eteiba placed third overall with a score of 310.50, while Nolan Mallet placed fourth with a final score of 307.65.

The three Tech scorers in the 3-meter diving event would send the meet to the final event tied at 168-168.

In the final event, the 400 free relay, Notre Dame turned in a time of 2:58.42 to edge the Yellow Jackets’ squad of Southern, Cohen Solal, Zimowski and Correia and their second-place time of 3:01.89 to escape with the head-to-head meet win.

Both the men’s and women’s teams will be back in action on Wednesday, Nov. 2, as the Yellow Jackets will host UGA at 4 p.m. in the McAuley Aquatic Center.

Is Georgia Tech going to host ACCs again? I remember something about Greensboro not hosting this year. GT home pool advantage at conference… should be added incentive to perform.