Not To Be Missed, Zhang Yufei Crushes 55.81 Fly For 8th Fastest Medley Split 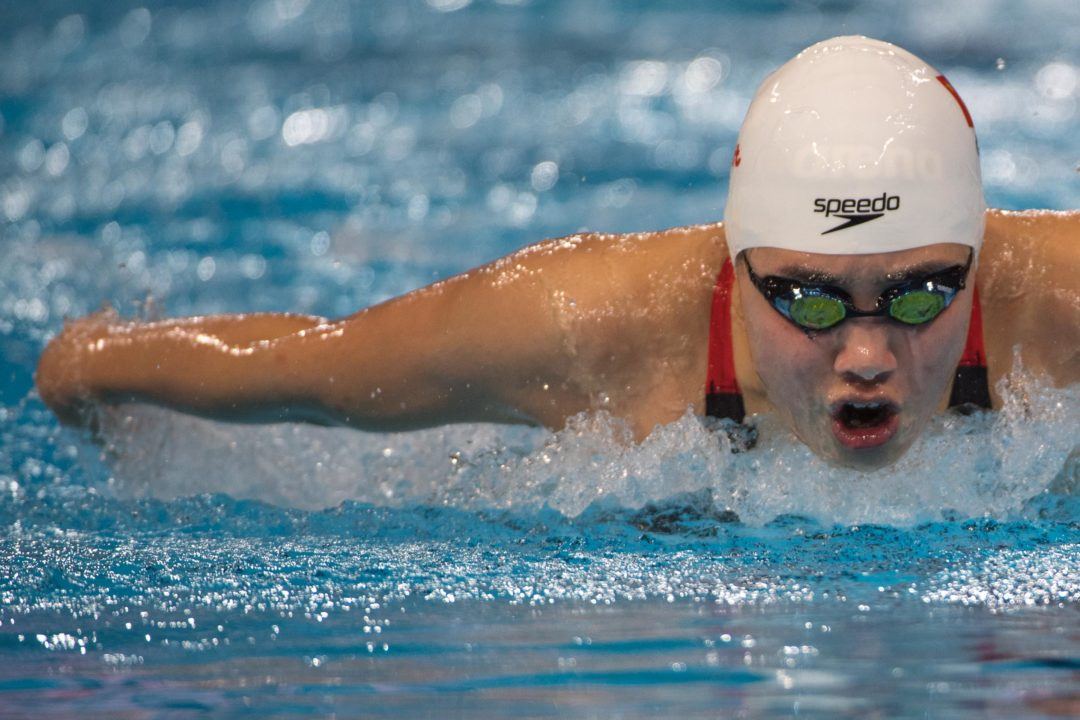 Zhang Yufei threw down several statement swims this week at her national team time trials, including as a member of the mixed medley relay. Archive photo via Mike Lewis/Ola Vista Photography

The Chinese National Team’s Summer Test Competition wrapped up today in Shandong Province, China, where several Olympians and World Championships athletes put up notable swims to prep for August’s Nationals. You can refresh yourself on the overall recaps via the links in the bullet points above; however, one particular prelims swim was worth a post all its own.

We reported how 22-year-old Zhang Yufei busted out the best 100m fly time of her life during the heats of the individual event on Friday, producing an outing of 56.47 to get under the 57 second mark for the first time in her career.

She proved that kind of performance, one that would have garnered the Chinese swimmer bronze at last year’s FINA World Aquatic Championships, wasn’t a fluke by striking down the 57-second barrier once again in the final. She ultimately hit a time of 56.68 to win the time trial against her peers.

One day earlier, Zhang was a member of the winning mixed medley relay team that punched a collective time of 3:40.56 in the final to fall just .12 outside of the Chinese national record. Zhang crushed a leg of 56.11 to help bring her squad to the wall first.

Falling under the radar, however, was the fact that Zhang was even quicker on the fly leg of that same relay in the morning heats. Again teamed up with Xu Jiayu, Yan Zibei and Yang Junxuan, Zhang blew away her competition with a split of 55.81.

According to USA Swimming’s database of all-time fastest relay splits, although it’s an unofficial time trial, Zhang’s 55.81 fly would rank 8th in terms of the quickest performances – ever. Zhang herself would rank as the 5th fastest fly relay performer for women all-time.

Not to diminish this swim, but is there any drug testing going on? I just don’t trust the chinese swimming federation not to take advantage of this covid situation.

“Not to diminish this swim” was your first lie.

I don’t think there is in-competition drug testing in any of those unofficial time trials around the world, including this one, but I just want to know what advantage one could have by swimming a fast unoffical time in an unofficial meet.
The results of other swimmers who competed in this meet are pretty normal, so it could be just her who should have had a breakout year in 2020.

How many current Chinese swimmers were already born in 1994?

Ur right, that country is completely honest and morally on the up and up since then

So quickly you forget.