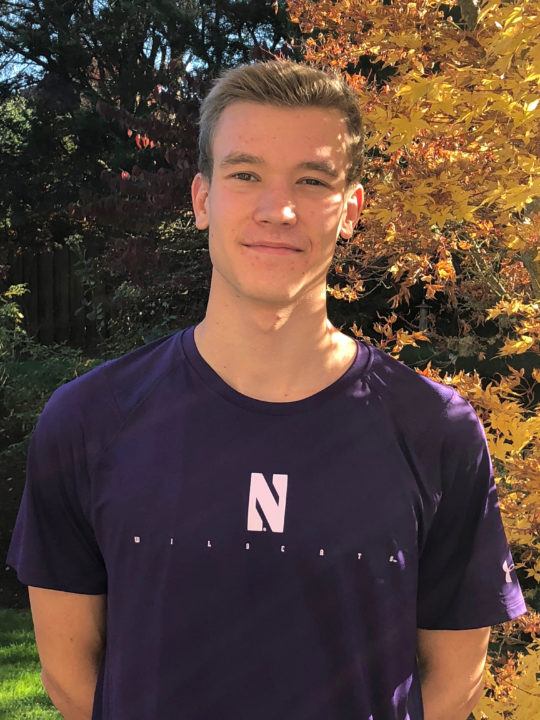 Northwestern University has picked up a verbal commitment from Oregon native Ben Miller of the Tigard Tualatin Swim Club and Tigard... Current photo via Ben Miller

Northwestern University has picked up a verbal commitment from Oregon native Ben Miller of the Tigard Tualatin Swim Club and Tigard High School.

There is no better place for me to achieve my goals, both academically and athletically. I’m beyond excited to be a part of this amazing team with such an incredibly bright future. Sincere thanks to everyone who has helped me throughout this process. Go Cats!

This is a big get for the Jeremy Kipp-led Wildcats, as Miller joins Ethan Churilla and Marcus Mok in the new coaching staff’s first recruiting class. The Wildcats were unable to recruit a single male swimmer or diver to their class of 2020 a couple of years back (though Colin Murphy has since transferred from Virginia Tech and is the sole junior on the 2018-19 men’s roster), so landing a Juniors A-finalist is a significant upgrade from where they were in recruiting just a few seasons back.

Miller won’t just be another body on the roster, either, as he’s fast enough to challenge for a Big Ten A-final spot at the conference champs. His 1:45.88 in the 200 fly would’ve placed 11th at the meet last year, in an event where the Wildcats just had one C finalist. His best in the 200 fly is also a good two seconds clear of any Wildcat last year.

NU is about to graduate a large class after this season, including Justin Hanson, their top 200 butterflier last season, as well as their two best 100 butterfliers in Arjun Sharma and Ryan Tate. Miller, then, comes at an opportune time.