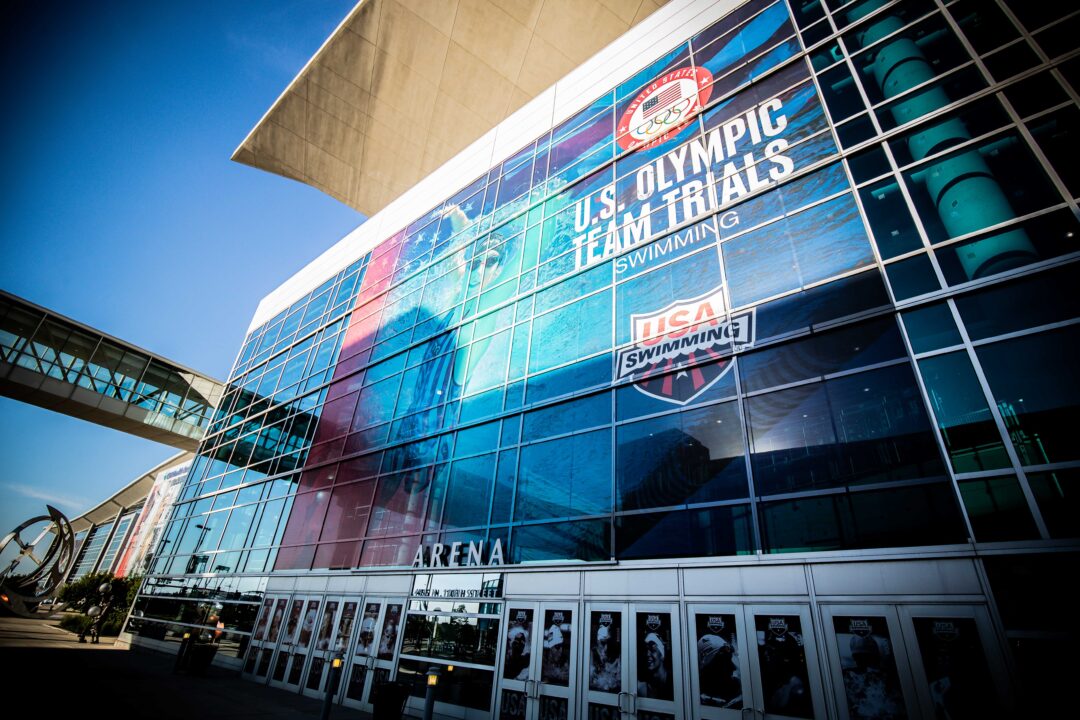 Athletes were tested for the coronavirus 3-6 days before their arrival in Omaha and they are re-tested every four days. No one has tested positive so far. Stock photo via Jack Spitser/Spitser Photography

Two days into the 2021 U.S. Olympic Trials Wave II, no athletes have tested positive for COVID-19.

Athletes were tested 3-6 days before their “First Official Activity,” generally meaning their arrival on deck in Omaha. And they are re-tested every four days.

“If a Participant tests positive for COVID-19, the Participant may request subsequent testing from Premier Medical Group (PMG) and must be asymptomatic and produce two negative COVID-19 PCR test results (and no positives) in order to be permitted to participate in the Trials.

“If, for any reason, two negative COVID-19 PCR Test results are not returned prior to the time of the athlete’s competition, the athlete will not be permitted to participate at the Trials.

COVID cases have been sinking both nationally and in Nebraska. The U.S.had a spike in cases in January, recording 300,779 new cases on January 8 alone. There’s been a gradual drop in the past six months. Now the daily case rate is down to 4,916, according to the New York Times.

Nebraska’s spike in daily cases came in November where they hit 2,812 new cases in a day. Now, the state’s daily cases rate is at 43 new cases on June 11th and none were reported on June 12th, according to the New York Times.

As we approach the Tokyo Olympics, Reuters reported that the country’s daily coronavirus case rate has fallen by more than 3,100 in the past three weeks as they are coming off a spike in cases from early May. Japan has vaccinated about 9.4% of their population.

Really don’t see Dahlia or Baker making the team for the second time which is very upsetting!

Sir, this is a Wendy’s

Well at least they didn’t get covid in the meet 🤷🏻

No new cases in the entire state of Nebraska on June 12.

Yet they still have to wear masks? And limit seating to 50%?

This is what it is like to live in a communist country.

Maybe it was those very same masks and seating restrictions that made that helped make that achievement possible.

Lol masks do nothing.

Ladies and gentlemen if you look off to your right you’ll be able to see a jam packed Warmup and warm down pool with a minimum of ten swimmers per lane and at least 3-4 swimmers on the wall in each lane! Mask less! Don’t worry though folks, covid doesn’t spread if it knows you’re warming up.

It’s almost like they had to make decisions about procedures and ticketing before June 12th.

Um.. as someone on site, you weren’t required to wear masks in the arena. The shopping area, yes, but not in the stands.

Thanks for pulling me back into reality with the headline, SwimSwam. Ugh.
I’m still reading articles about how the Japanese public wants the games cancelled.

Doesn’t every host country have a ton of people that don’t want the Olympics in their country? I’m not worried about it.

Is it bad that a fuming Lilly King immediately popped into my mind as soon as I read “tested positive” in the article title?