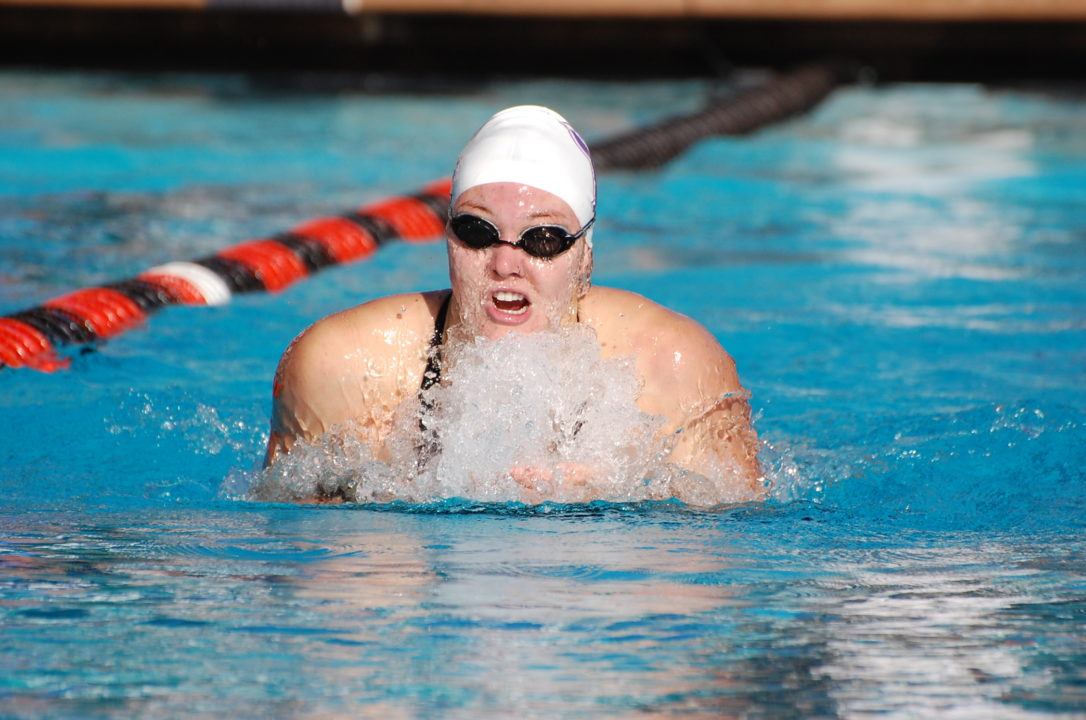 After two years without breaking 1:00, Popov smashed through the 59.0 barrier for the first time in her life with a huge swim this morning in the 100 breast. Archive photo via Anne Lepesant

Day 3 of the Tennessee Invitational ran through prelims this morning, with hosts Tennessee continuing to put dominant team performances down to make up the vast majority of A-final spots for tonight.

Erika Brown was at it again, taking the top seed in the 100 fly for tonight with a 50.46, ahead of the rest of the field by nearly two full seconds. Brown is among several NCAA women over the last year or so (and this year welcoming Maggie Macneil and Beata Nelson) to make a sub-51 100 fly look easy. The 100 fly field was pretty deep past Brown, too, with it taking a 53.2 to make it to tonight’s A final in Knoxville and six other girls going 52’s.

Brown also posted a 51.88 in the 100 back for a nice double, getting ahead of a strong 52.49 showing from Duke’s Alyssa Marsh. The Blue Devil women do have a top seed for tonight, with Melissa Pish going 1:46.98 in the 200 free to tie with Tennessee’s Stanzi Moseley.

Perhaps the story of the meet thus far has been the resurgence of Nikol Popov, the Tennessee sophomore. Popov was a rare sub-1:00 breaststroker in high school, making her one of the highest ranked recruits of her class with a 59.5 PR. Last season, though, she didn’t deliver the performances one would expect, never even breaking 1:01 (in fact, her best last season was a 1:01.6 from this meet last year).

Last night, though, Popov rocked a 57.8 breast split on the medley relay, and this morning she clocked a new best of 58.83 in the 100 breast prelims. For Popov, this is monumental swim, marking her first time under 1:00 in two years and a new best by over seven tenths. With Popov and Brown, Tennessee’s middle medley legs are going to be very impactful come March.

The Tennessee men nearly raced to top seeds for tonight in every single event, giving up just one, the 400 IM.

Joey Reilman clocked a 1:34.05 to take the top spot in the 200 free, ahead of Denver’s Cameron Auchinachie. The sophomore Auchinachie was 1:35.26, a lifetime best by a whopping four seconds and change. Reilman also swam well in the 100 back, going 46.28, but it was his teammate Matthew Garcia who edged him at the finish with a 46.08.

Penn State’s Hayden Harlow won a very tight race in the 400 IM this morning with a time of 3:50.13. Hundredths behind him were two men who tied — Penn’s Thomas Dillinger and Penn State’s Michael Daly both hit the pad at 3:50.16.

It is obviously the Boxer who motivated NiKol! WOW an amazing swim and great opportunity for UT to win a Medley or two at NCAAs!!!