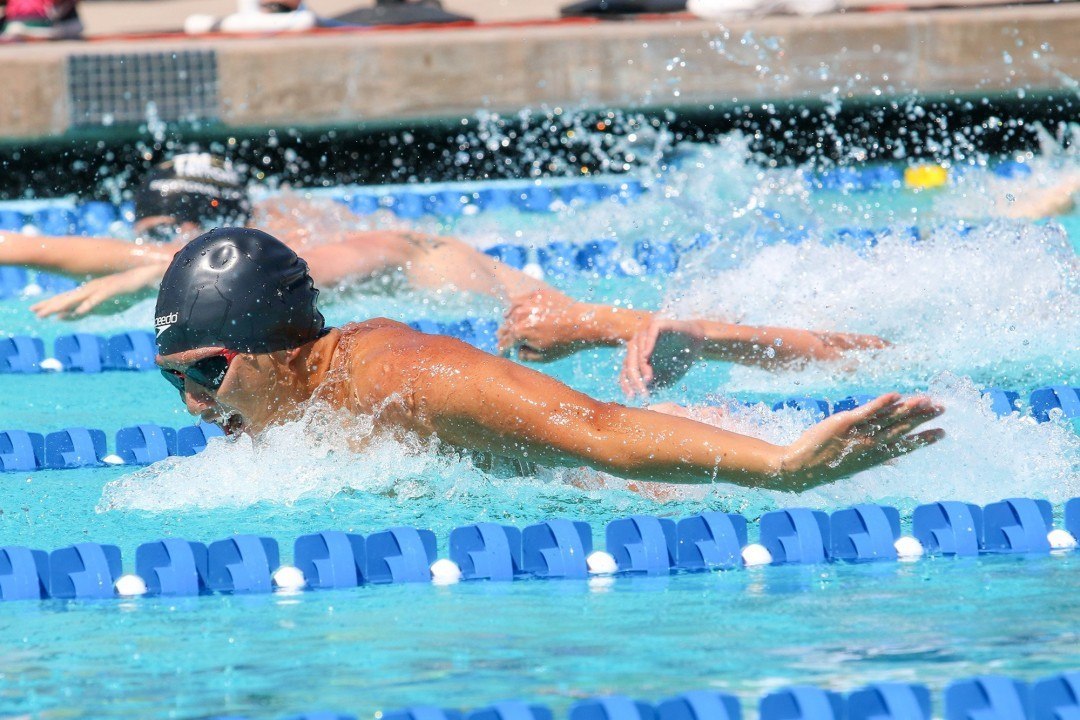 Garrett Chin of Swim Pasadena punched his ticket to 2016 Olympic Trials with the top time in the men's 400 IM at CA-NV Summer Sectionals in Santa Clarita, CA. Current photo via Richard Quinton

Among the many lifetime-bests posted on Friday at CA-NV Summer Sectionals in Santa Clarita, a few of them landed their swimmers first-time tickets to 2016 Olympic Trials. Garrett Chin of Swim Pasadena posted the morning’s top 400 IM time, dropping 1 second in prelims to secure a 4:26.64 and beat the Trials standard by 8/10. In the evening session, Chin led from start to finish. He was first to the wall after the fly leg, broke clear of the field in backstroke, and built his lead to about 5 body lengths with breaststroke. Ahead of his morning pace through the first 200, Chin had a slower second half but still won the event by over 6 seconds. With the pressure of making the cut off his shoulders and no one to push him in finals, Chin finished with 4:30.38. Mario Vasquez of Roadrunner Aquatics was runner-up in 4:36.68.

Brock Bonetti of Roadrunner Aquatics put up a monster 100 back in prelims. Although he had achieved his Trials cut at 2014 Juniors with 56.74, he hadn’t broken 57 seconds since. In the middle lane of the first morning heat of the men’s 100 back, Bonetti unleashed a 54.68, propelling him to the 9th spot overall in the US so far this season. Like Chin, he was unable to improve upon his morning swim in finals, but he still won with an impressive 55.59, more than a second faster than his seed time. CLASS Aquatics’ David Puczkowski edged De Anza Cupertino’s Casey Fleming for second, 57.24 to 57.64.

Although Abbey Weitzeil scratched her individual 200 free, she nonetheless suited up in finals to anchor Canyons’ 400 free relay. When Weitzeil stepped onto the block, her relay was one of four teams bunched together, all trailing San Diego State by about 3.5 seconds. Weitzeil took to the water and immediately did away with the other three teams with a first 50 of 25.41. Although she came back in 28.58 for a stunning 53.99 anchor, Weitzeil wasn’t quite able to catch SDSU’s Savannah Miller, who split 56.79 on the end to ensure the Aztecs’ win with 3:50.33. Canyons wound up with 3:51.02, beating their seed time by 1.3 seconds. SDSU improved their entry time by 1.5.

Needs to drop a second to be on the relay in Rio.

Congrats to all the OT’s qualifiers. You however failed to catch all the new OT qualifiers at the LAI meet. Will you be putting out a new list in the future?