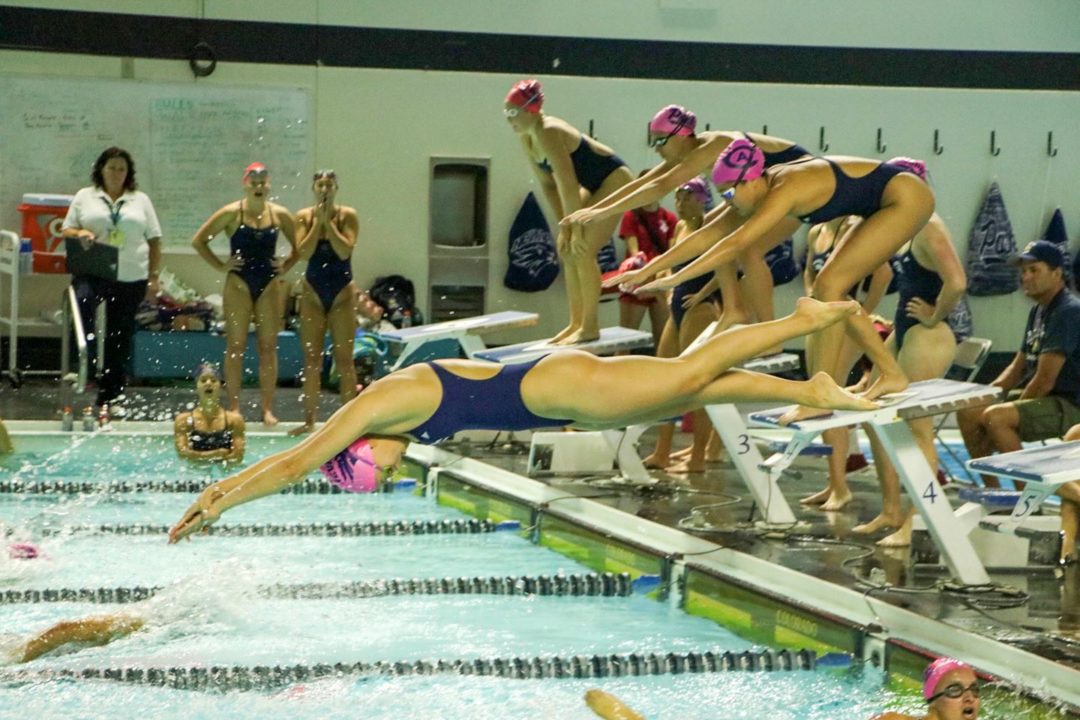 Read on to find out the 2020 Olympic implications of today’s swims at the Rotterdam Qualification Meet (RQM) in the Netherlands.

It was another big day for NC State commit Noe Ponti of Switzerland, as the 19-year-old fired off his 2nd national record in as many days.

RENO, Nev. –  The Nevada women’s swim and dive team wrapped up the regular season with a win over the New Mexico Lobos, 189-109, on Friday, Jan. 31. The Pack moves to 6-2 in dual meets on the season with the Mountain West Championship on the horizon.

The meet started out with the recognition of the single senior, Andressa Cholodovskis who went on to win the 100 free and take second in the 50 free. The Brazil native also swam the third leg of the 200 medley relay that won with a time of 1:43.84.

Nevada had a pair of freshman score in more than one individual events. Benedict Nagy won both the 200 back in 2:05.43 and the 400 IM with a time of 4:28.73 while Nicolette Jasko finished third in the 100 breast. Nagy also brought home second in the 100 back.

The 400 free relay was one of the closest races on the night with the times just hundredths of seconds different. New Mexico ended up winning with a time of 3:28.79 but Nevada was not far behind, finishing second with a time of 3:28.84. The relay of McHugh, Jasko, Wijkhuijs and Colette Berkenfield wrapped the meet up.

Next on the schedule for the Pack is the Mountain West Championships in Minneapolis, Minn. on Feb. 19-22.

RENO, Nev. — Hedda Øritsland won the 50-yard freestyle and the 100-yard butterfly and swam the anchor of the winning 400-yard individual medley relay, but it wasn’t enough as the Univversity of Nevada picked up 10 wins on the evening as the Wolf Pack defeated UNM 189-109 on Nevada’s senior night.

UNM found itself down 64-29 after the fifth event, winning event two, the long-distance women’s 1,000-yard freestyle.  Josie Carpenter, coming from behind with a tremendous closing 50 yards for a win by 3.14 seconds.  UNM got back into it with back-to-back wins, getting another win in the 100-yard butterfly from reigning Mountain West swimmer of the week Nicholle Toh and a third-place finish from Jordan Hartley for 12 points.  UNM got another 12 in the 50-yard freestyle with the first of three wins from Øritsland.

She picked up the win by just 0.11 seconds in the sprint over Andress Cholodovskis Lima, and Olivia Bishop and Breanna Wiercinski added three more points and UNM got back into the meet down 78-53, but Nevada won the next four races, outscoring UNM 59-16 over those four events to basically seal the meet.

UNM wasn’t done however.  Brnydis Bolladottir took a win in the 500-yard freestyle, but UNM couldn’t capitalie, scoring just 10 to Nevada’s nine in the event. Øritsland got win No. 2 in the 100-yard butterfly, just nipping teammate Toh as they went 1-2, but UNM’s only other win would be a scintillating win in the 400-yard individual medley as she swam anchor in front of Olivia Bishop, Wiercinski and Toh.

NOTES:  A week after being UNM’s fourth diver and no scoring, Sara Rogers scored five points including a career-best 281.70 in the 1-meter and 317.78 in the 3-meter … Talia Passarelli, who scored 12 points against NMSU including a win, did not swim against Nevada … UNM’s final meet before the conference championships is the Air Force Diving Invitational February 6-8 in Colorado Springs.