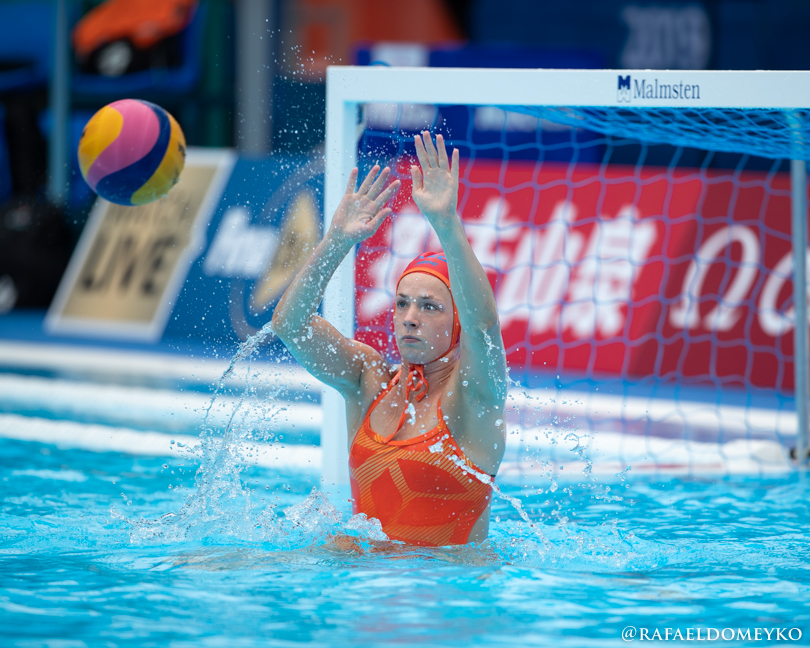 The Netherlands, Hungary, Greece and Australia claimed the final four spots in the women's water polo quarterfinals at the World Championships. Current photo via “Rafael/Domeyko Photography”

The Netherlands, Hungary, Greece and Australia claimed the final four spots in the women’s water polo quarterfinals at the World Championships with playoff victories on Saturday.

Canada, New Zealand, Greece and Kazakhstan will now drop to the ninth through 12th place seeding matches with losses in the playoffs.

In the 13th to 16th place classification matches, South Africa and Japan came up victorious on Saturday and will play for 13th place on Monday.

The quarterfinal slate for Monday is now set.

South Africa scored the first four goals of the game, including three counter attack scores, en route to a 16-1 advantage with 2:47 to play in the third quarter. Amica Hallendorff scored four goals in the span.

An action shot by Yelim Cho with 2:20 left in the third gave Korea its second goal (16-2). Later, trailing 20-2, Jungeun Lee put in an extra-player shot to give Korea its final goal with 3:53 to play. South Africa ended the game with six goals in a row, including three by Gerber.

Gerber, Hallendorff and Lucy Miszewski put in four goals apiece for South Africa, while Jordan Wedderburn and Nicola Macleod each turned in hat tricks among 10 scorers. South Africa put in 26 of its 37 shots, including 5 of 8 extra-man tries and 2 of 3 penalty shots.

Daseul Kyung, Cho and Lee accounted for Korea’s three goals as the team went 3 for 19 in shots, including 2 of 7 extra-player tries.

Cuba scored first and led 2-1 three minutes into the game, but it was nearly all Japan from there in a 21-9 victory.

Japan turned the 2-1 deficit into an 11-4 advantage with eight action shots, an extra-player goal and a counter attack. Yumi Arima and Misaki Noro each scored three times in the stretch.

Cuba was within six three times, last at 13-7. Japan countered with six goals, including two by Arima, to go up 19-7. The teams then split the final four goal leads to the 21-9 final score.

Arima put in five goals to lead Japan, while Noro added four and Maiko Hasida notched a hat trick. Japan made 21 of its 35 shots, including 6 of 9 extra-player tries and one penalty.

Mayelin Bernal Villa scored three times for Cuba, while Dalia Grau Quintero and Daniuska Carrsasco Leyva added two goals apiece. Cuba scored on 9 of its 24 shots, including 2 of 3 extra-player tries and one penalty.

After a scoreless first quarter, the Dutch got two action shots, a center shot and an extra-player goal to go up 4-1, including two scores by Maud Megens.

Emma Wright delivered a center shot goal with a minute to play in the first half and an extra-player goal with three minutes left in the third quarter to pull Canada within one at 4-3.

The Netherlands scored the game winner on a penalty shot by Sabrina Van Der Sloot with 6:43 to play. Kyra Christmas scored Canada’s final goal with 4:58 left in the game.

Canada had five more chances, missing two shots, hitting the post once and having two shots saved down the stretch. With one second left, Wright had a six-meter direct shot in a free throw situation saved. Meanwhile, the Dutch missed two shots and had one blocked and two saved in the final five minutes.

Megens scored two of the Netherlands’ five goals. The Dutch scored on 5 of 34 shots, including 1 of 3 extra-player tries and their lone penalty.

Wright put in two goals for Canada as the team made just 4 of 31 shots, including 2 of 3 extra-player tries.

Hungary scored the first three goals of the game and outscored New Zealand 13-4 in the final three quarters of the 17-6 victory.

Up 4-2 after the opening quarter, Hungary rattled off 11 of the next 13 goals, leading to a 15-4 score with 5:08 to play in the game. Rita Keszthelyi scored four goals in the stretch.

New Zealand got an extra-player goal from Kaitlin Howarth with four minutes left to make it 15-5, but Hungary countered with a pair of scores, before Morgan McDowall put in a center shot with 43 seconds to play to round out the game.

Keszthelyi scored four times for Hungary, while Dora Leimeter followed with a hat trick among nine scorers. The team made good on 17 of 35 shots, including 6 of 10 extra-player tries.

McDowall and Emmerson Houghton scored two goals apiece to pace New Zealand. The Kiwis scored on 6 of 24 shots, including 2 of 11 extra-player tries and 1 of 2 penalties.

Greece built a 4-1 lead in the opening eight minutes and held off China down the stretch for a 12-8 victory.

Eleftheria Plevritou put in an extra shot and an extra-player goal as Greece grabbed the early 4-1 advantage. Each team put in two goals in the second quarter leading to a 6-3 score.

A center shot by Alexandra Asimaki made it 7-3 Greece just 28 seconds into the second half. China would get no closer than two the rest of the way (9-7 with 1:41 to go in the third).

Christina Tsoukala put in a penalty and an action shot in the final seven minutes to cap the 12-8 win for Greece.

Eight players scored for Greece, led by Plevritou’s hat trick and two goals apiece from Tsoukala and Alkisti Avramidou. Greece put in 12 of its 26 shots, including 5 of 8 extra-player tries and its lone penalty.

Zihan Zhao scored four times to lead China, while four other players chipped in a goal. China hit 8 of 37 shots, including 2 of 8 extra-player tries and 1 of 2 penalties.

Australia claimed the final quarterfinal spot with a 13-3 win over Kazahkstan, outscoring the Kazakhs 4-0 in both the first and last quarters.

Kazakhstan scored its first goal with 1:18 to play in the first half on a center shot by Zamira Myrzabekova (5-1). The Kazakhs got an action shot by Kamila Zakirova (5:47, 3rd) and an extra-player shot by Myrzabekova (3:24, 3rd) to make it 8-3, but it was all Australia from there.

Bronte Halligan put in four goals for the Aussies, including two in the last nine minutes. Keesja Gofers and Zoe Arancini added two goals apiece among eight scorers as the team hit 13 of 32 shots, including 3 of 9 extra-player chances.

The Kazakhs got two goals from Myrzabekova as they made 3 of 26 shots, including just 1 of 7 extra-player tries.