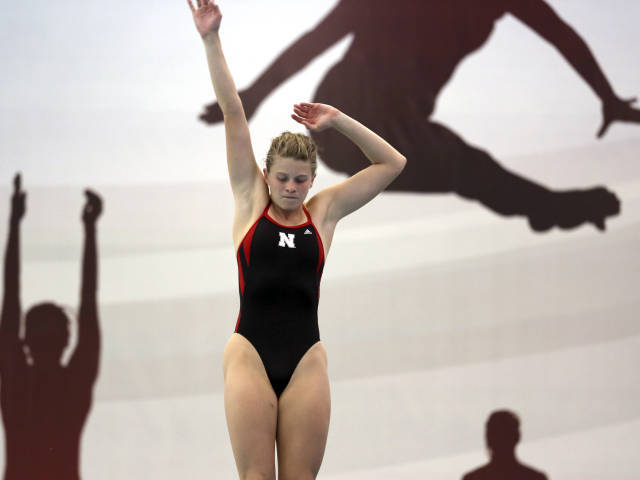 LINCOLN, Neb.– The Nebraska swimming and diving team recently announced its captains for the 2019-20 season. The team selected senior diver Abigail Knapton and junior swimmers Autumn Haebig and Izzie Murray to be captains for the upcoming season.

Four-time All-American Abigail Knapton put together her best season yet, firmly establishing herself as the best diver in Nebraska history. At the 2019 NCAA Championships, Knapton dove to fifth place on the platform board with a finals score of 316.75. It marked her third consecutive first-team All-America award on the platform. She added an honorable-mention All-America award with her 15th-place finish on the three-meter board. She posted a final score of 639.10 (333.90 carried over from prelims). Knapton became the first four-time All-America diver in Nebraska history and the first Husker diver to earn All-America honors three times in the same event. In 2020, Knapton will have a chance to become the first four-time first-team All-American in the same individual swimming or diving event in school history. Knapton also became the first Husker to earn two All-America awards at the same NCAA Championship meet since Elvira Fischer won a pair of honors in the breaststroke events in 2001. Knapton’s outstanding junior season made her a finalist for the Nebraska Outstanding Female of the Year Award across all sports.

Knapton qualified for her third consecutive NCAA Championships by winning the platform competition at the NCAA Zone D Diving meet. She added a ninth-place finish on the three-meter board. She also placed 21st on the one-meter board at the zone diving competition. At the 2019 Big Ten Championships, Knapton captured All-Big Ten honors on the platform with a fourth-place finish and a total of 340.10 points. The Omaha native posted the highest round score of the evening in round two (90.75), followed by a strong third-round dive (70.95). Not only was it Knapton’s first year placing in the top eight, she placed in the top eight in all three dives. She took fifth on the three-meter board and added a sixth-place showing on the one meter, setting a career best with a 323.70 on the one meter at the Big Ten Championships.

Autumn Haebig followed her impressive freshman season with a strong sophomore campaign. She earned 13 top-five finishes, including seven victories, and set career bests in the 100 free (49.38) and 200 free (1:46.02). Throughout the season, Haebig was a consistent performer for the Huskers, winning the 100 free three times (vs. Kansas, Rutgers, South Dakota State), the 200 free twice (Last Chance Meet, vs. Rutgers), and the 100 back twice (vs. Kansas, Iowa State). Competing at the USA Swimming Winter Nationals, Haebig won the 400 free B final, placed third in the 200 free B final, and sixth in the 100 back A final. At the ACC/Big Ten Challenge, Haebig swam on three Big Ten relay teams, finishing sixth in the 400 medley relay (Haebig, Beeler, Doty, Doctor), fifth in the 800 free relay (Haebig, Unicomb, Koontz, Waddell), and fourth in the 400 free relay (Unicomb, Haebig, Burvill, Andison). Concluding her season at the Big Ten Championships, Haebig finished 12th in the 100 free in career-best time (49.38), 15th in the 500 free, and 18th in the 100 back. Out of the water, Haebig was named to the Nebraska Scholar-Athlete Honor Roll both semesters and earned a place on the Tom Osborne Citizenship team for the second time.

Izzie Murray built upon her previous success with a strong sophomore season for the Huskers, competing in numerous events across the board and earning seven top-five finishes. The butterfly was her strongest stroke, with a victory in the 100 against South Dakota State, a runner-up in both the 100 and 200 at the Mizzou Invite, and two third-place showings (vs. Kansas, Iowa State). She set career-best times in the 50 free (24.99), 100 free (55.12), 100 back (55.67), and 200 fly (157.11). At the USA Swimming Winter Nationals, she competed in the 100 fly prelims on the long course. Qualifying for the Big Ten Championships in three events, Murray finished seventh in the 200 fly, 20th in the 100 fly, and 40th in the 100 back. Out of the water, Murray earned academic All-Big Ten honors and was a member of the Tom Osborne Citizenship Team