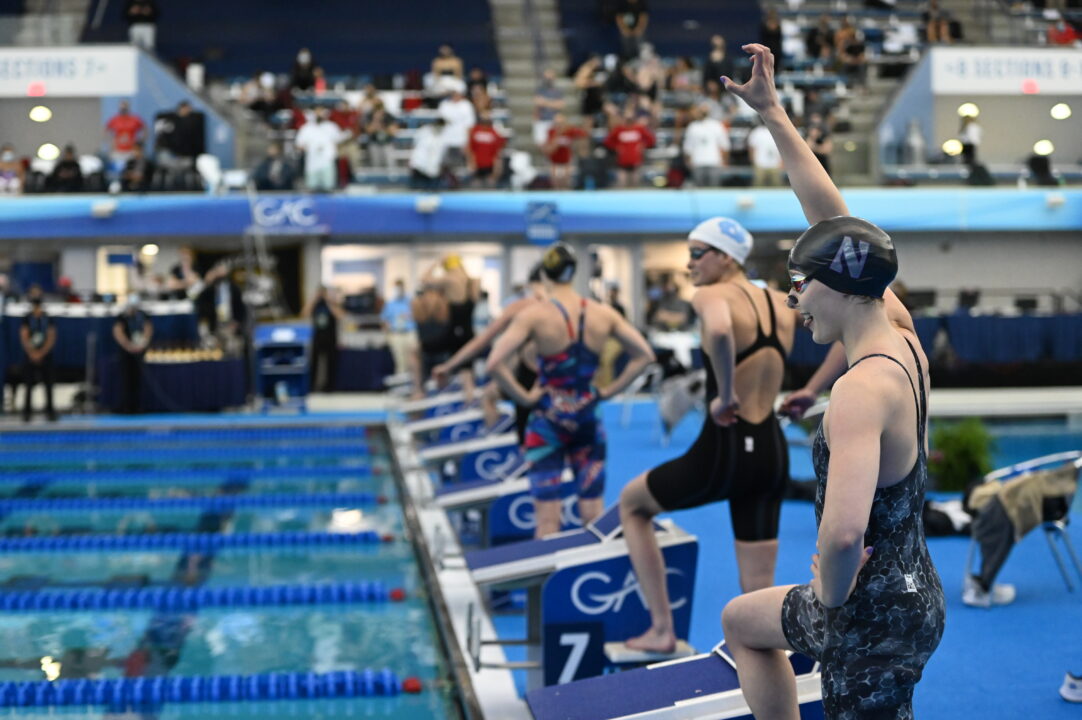 Smith and Angus each had banner 2020-21 seasons, not only for their own swimming careers but also for the NU program.  Current photo via NCAA

Upon completing their undergraduate education at Northwestern University this spring, both Maddie Smith and Sophie Angus are staying for graduate school, and they’ll each have one more season with the Wildcat swimming & diving program.

A sprinter who transferred from the University of North Carolina in 2019 after her sophomore year, Smith was a star at the 2021 Big Ten Championships. After being stuck at 22.42 in the 50 free since 2017, she blew by that with a 22.06 at Big Ten prelims before taking the NU program record down to 21.94 to take third in the final. She was the 100 free runner-up at Big Tens (47.98), clipping the program record there, too, and was an integral part of Northwestern’s relays.

At NCAAs, Smith became an All-American with an A-final appearance in the 50 free, again breaking her own school record with a 21.92 to take seventh in the final. She was also a B-finalist in the 100 free and was 19th in the 100 fly prelims.

Angus continued her success into NCAAs, making the 100 breast A-final in school-record fashion (58.59) and taking eighth overall at night. Hannah Brunzell, a rising junior on the team, walked away from the 2020-21 season with school records in both breaststrokes, going 58.50 in the B-final and 2:06.60 in the 200 breast B-final. The pair will get another season in the NCAA, making them one of the strongest 1-2 breaststroke punches in the nation again.

The Wildcats have four women coming in as freshmen to go along with these super senior returners: #5 freestyler Ashley Strouse, backstroker Justine Murdock and sprinters Kenisha Gupta and Emily Park.

Another NU star, Calypso Sheridan, is in the NCAA transfer portal for grad school, though she said she intends to compete for NU for her senior season in 2021-22 after redshirting this past year.

Great have these amazing leaders back. NU is feeling dangerous

Angus and Smith cannot be understated in their point scoring capabilities and strength on relays. Expect to see Northwestern continue their meteoric rise in the Big Ten conference with these two at the helm next year.