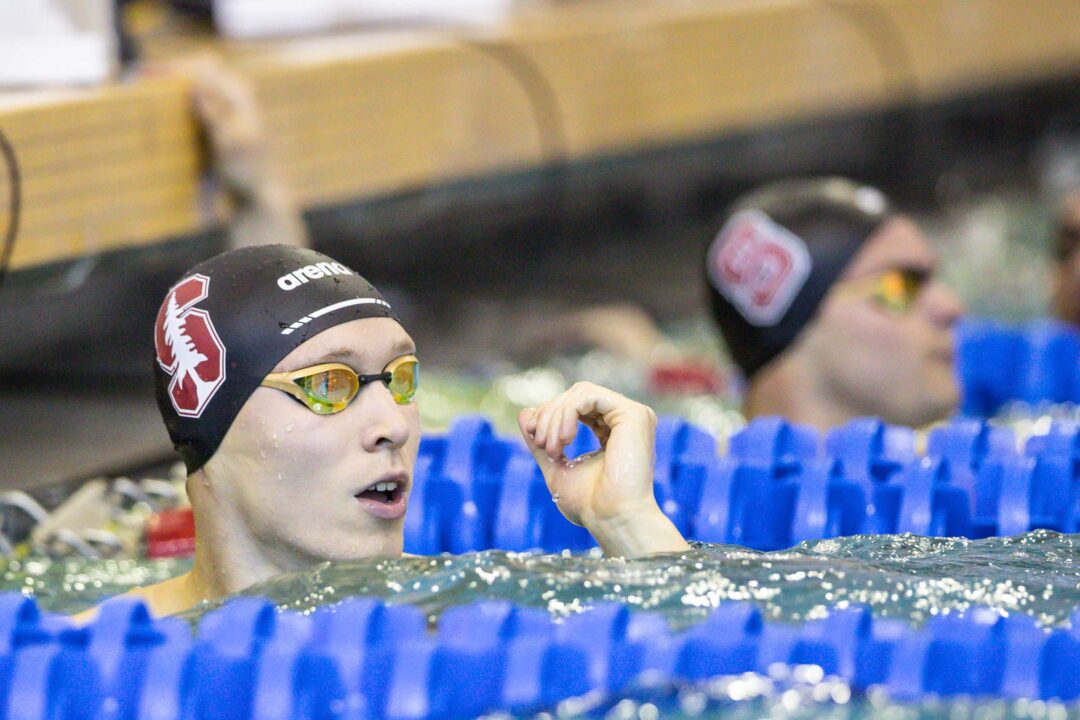 Andrei Minakov, who won the 100 fly at last month's NCAA Championships for Stanford, has opted out of next week's Russian Nationals Current photo via Jack Spitser/Spitser Photography

Andrei Minakov, who just completed his first season with the Stanford Cardinal in the NCAA, has confirmed through Russian media that he will not be attending next week’s Russian Championships in Kazan. While Minakov declined to address his international schedule during interviews at NCAAs, he has now made his intentions clear for the competition slated to begin on April 24th.

Despite being banned from FINA and LEN competitions, Russian Swimming Federation President Vladimir Salnikov has said that the Russian National Team will compete internationally with friendly nations, including Belarus, this summer. While it is unclear how his absence from these championships may impact his ability to compete with the Russian team this summer, Minakov stated that the decision to pass on the Russian Championships was made in conjunction with national team leadership, including Salnikov and head coach Sergei Chepik.

Minakov said that the decision to skip the championships was “difficult,” citing “complicated” circumstances in the United States and at Stanford that helped lead to his decision.

Stanford’s Academic Calendar differs from many colleges in the United States, utilizing the quarter system, as opposed to the more traditional two-semester year. Stanford’s Spring Quarter started just a few weeks ago and final exams are slated to take place June 3rd-8th, nearly a month later than many colleges around the country.

Minakov had a fantastic first NCAA season at Stanford, leading a resurgent Cardinal to a 7th place finish at NCAAs. He played a key role on all five of Stanford’s relays and also won the 100 fly title in 43.71. In his other individual event, the 100 free, Minakov finished 3rd overall in a 41.09.

Send him and all his ‘comrades’ back to Russia for good. No more Russian athletes training in the States. How many US athletes are on a scholarship in Russia?

idea for a russian reality tv show: “You got conscripted!” expats land at the airport and find they are forced to fight in ukraine

I hope it was in protest against what Russia is doing, and smart of him not to detail why he is doing so.

Russia may pull an AFC Richmond and send the swimmers off to war.

Given the situation in Ukraine Russian Visas may not be guaranteed. The Bureau of Counterterrorism lists criteria that by their means makes Russia a terrorist state.

I mean just logistically, it would be a nightmare for him to even find a flight to get into Russia …

Two minutes found me a flight from Denver to Moscow through Turkey, not that hard.

Be interested to see if you get pinged for extra screening next time you fly.