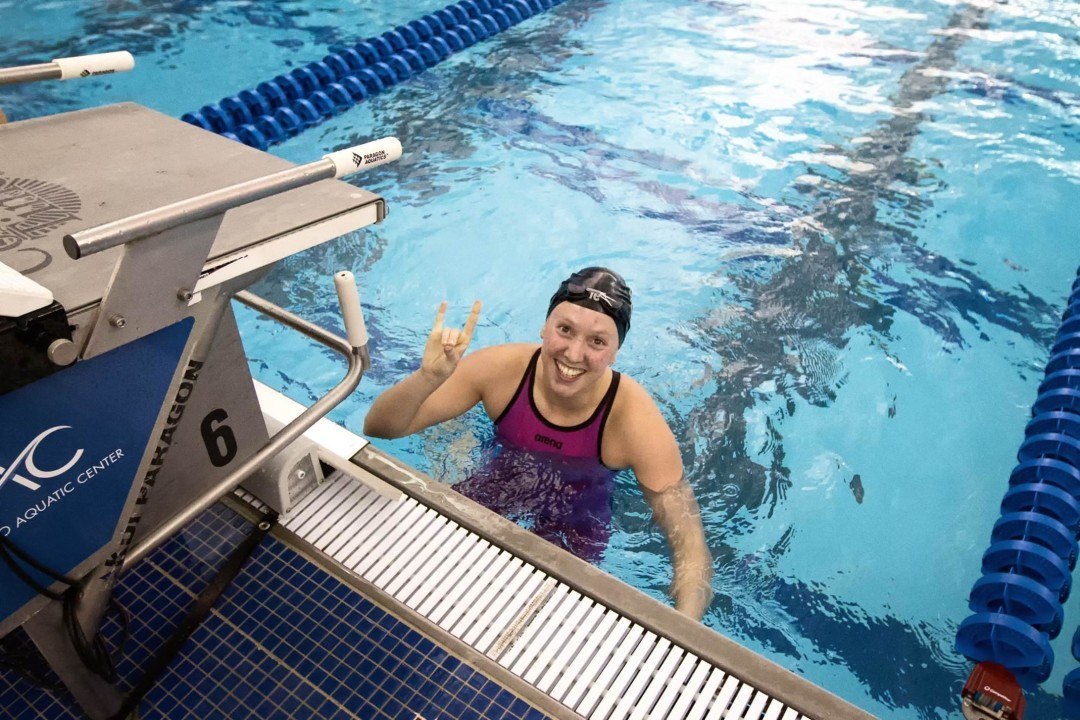 The battle between the NC State and Virginia women came down to the very end of the meet on Saturday, as the Wolfpack secured victory by 6 points with their win in the 200 free relay. Archive photo via Tim Binning/TheSwimPictures.com

The battle between the NC State and Virginia women came down to the very end of the meet on Saturday, as the Wolfpack secured victory by 6 points with their win in the 200 free relay. Freshman Ky-Lee Perry led off the relay with a 22.23 for a new 50 free Pool Record, followed by teammates Krista Duffield (22.09), Lotta Nevalainen (22.29), and Natalie Labonge (22.16). Their winning time of 1:28.77 was an NCAA ‘A’ cut time.

RALEIGH – The No. 3/9 NC State swimming and diving team closed out its weekend of ACC action on Saturday evening inside Casey Aquatic Center with a sweep over No. 13/5 Virginia, as the men earned a 177-109 win and the women pulled out a 153-147 victory.

This marked a sweep over the weekend for the men and women as the teams took down ACC rival UNC-CH on Friday. NC State collected 24 wins out of the 32 events contested, including seven event sweeps.

Quoting The Coaches
Swimming
“I thought it was a great day, especially with it being Senior Day,” said head coach Braden Holloway. “Last night we had a lot of emotion and the goal for today was to re-create the atmosphere, which can be hard to do but they did it. Overall it was a great team effort, especially for the ladies. We knew it was going to be a good meet with Virginia and was proud of how they fought tonight.

“With this being Senior Day – this class is very special to this program. They have really helped to create the culture that we have both in the pool and in the classroom. The way they conduct themselves everyday has really helped to grow this team and we owe a lot to them.”

Diving
“The system is in place, and what I saw today was a very promising future for Wolfpack diving,” said head diving coach Yahya Radman. “We made big contributions to our swimming counterparts, we’re moving in the right direction and the momentum is being built. I’m very proud of the team, but Harrison (Mitchell) had a phenomenal meet and really led our team in the way I knew he could. On the women’s side the girls battled tooth and nail for every point they earned, and the excitement for each other is one of the best. I look forward to getting back to work and seeing where this team will take us and what their legacy will be when they leave.”

Wolfpack Relays
NC State managed to start the meet off on a high note with wins in the men’s and women’s 400 medley relay. The women’s team of Alexia Zevnik, Kayla Brumbaum, Natalie Labonge and Ky-Lee Perry touched in 3:35.06, and the men’s squad of Andreas Vazaios, Derek Hren, Soren Dahl and Joe Bonk stopped the clock at 3:12.28.

Heading into the 200 free relay the women’s team trailed by three points, but the team of Perry, Krista Duffield, Lotta Nevalainen and Labonge turned in an NCAA A time of 1:28.77 to seal the meet win over the Cavaliers.

In the men’s 200 free relay the squad of Ryan Held, Justin Ress, Bonk and Andreas Schiellerup posted the fastest time of the event in 1:18.24.

Top Individual Performances
On the men’s side the endurance speed crew continued its hot streak throughout the weekend, as Anton Ipsen touched first in the men’s 1000 free in 8:57.25 and Adam Linker and Jack McIntyre completed an event sweep with marks of 9:03.83 and 9:05.27, in respective order. Ipsen and Linker earned a one, two finish in the 500 free after touching the wall at 4:22.54 and 4:24.93.

The third sweep for the men’s team came in the 100 backstroke. Hennessey Stuart placed first in 47.35 while Coleman Stewart and Schiellerup came in second and third with times of 47.48 and 47.96.

In addition to the men’s squad’s dominance across the board in the swimming events Hren managed to sweep the breaststroke events as he touched at 54.91 in the 100, while Stuart won both backstroke events after stopping the clock at 1:43.44 in the 200.

Harrison Mitchell had an impressive outing on the diving boards as he won the men’s one-meter dive with a score of 320.55 and turned in the top score in the three-meter event with a mark of 351.08. James Brady and Stewart Spanbauer additionally posted strong scores on both events to complete event sweeps.

Elise Haan and Courtney Caldwell picked up valuable points in the women’s 100 back, turning in a one, two finish with times of 54.13 and 54.57.

In the women’s diving events Madeline Kline was the top finisher on both boards, placing second with a score of 301.05 on three-meter and 280.88 on one-meter.

Up Next
NC State will return to action when select members of the team travel to Chapel Hill, N.C., for the Carolina College Nike Invitational, hosted by UNC-CH Feb. 3-5.

“We knew this would be a stiff challenge for the men and women, but majority of people embraced it and competed well,” UVA head coach Augie Busch said. “It was a great dual-meet season for us. Now it is time to get some rest and put the focus on the meets that really matter to us and the program, ACCs and NCAAs.”

“It was a great job by Kirsten today,” UVA head diving coach Jason Glorius said. “I’m very proud of her effort and she threw down a new dive very few women can do. Overall, we did some good things, but we are still working on consistency. Moving forward, I know we have put in the work and have set ourselves up well for ACCs.”

Congratulations Wolfpack! Especially great to win against the Wahoo women