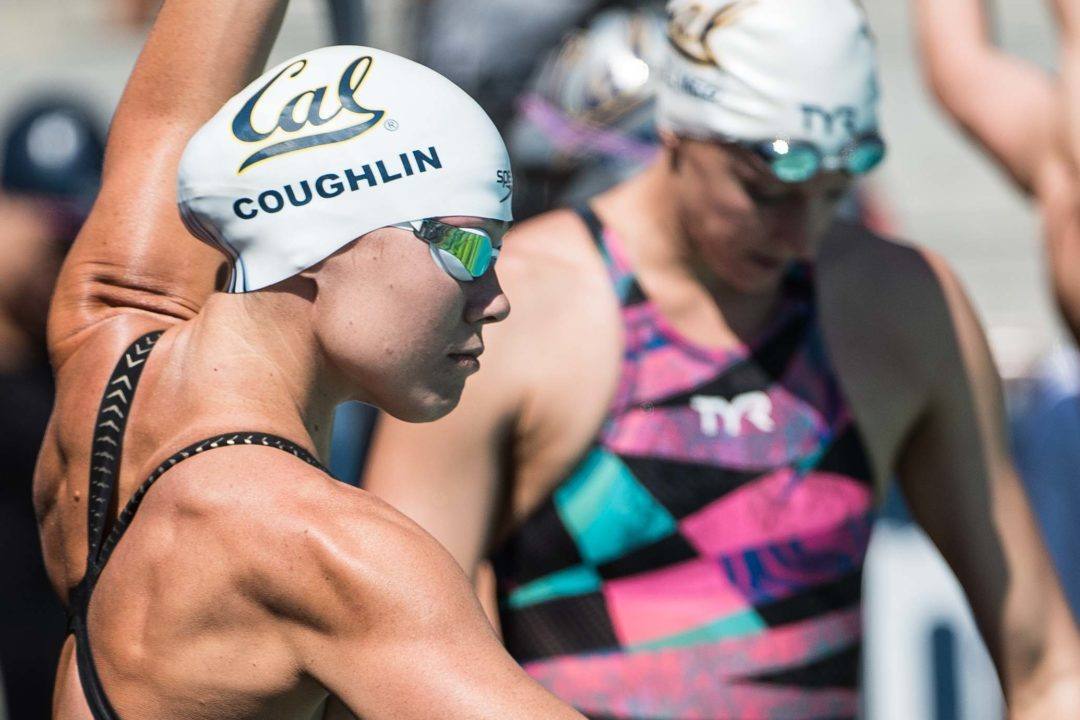 American swimmer Natalie Coughlin, a 12-time Olympic medalist who missed qualifying for the Rio 2016 Olympic Games, says she was surprised at the American decision to leave Amanda Weir out of the finals foursome in the women’s 400 free relay that earned a silver medal earlier this week.

“I was really, really surprised (Weir) wasn’t on the relay,” Coughlin said to the Gwinnett Daily Post.  “And this is in no way disparaging the people who were on the relay. The four girls who were on the night relay did a fantastic job and got a silver medal. Relays are always a really touchy subject because they are at the coaches’ discretion. Nothing in our swimming by-laws says that if you’re in this place at Trials you are on the night relay. There’s really nothing like that.

“However, Amanda’s entire season has clearly showed she earned that spot. The prelims, the semifinals and the finals at Olympic Trials, her leadoff swim (in the Olympics) were consistently fast and should have got her that spot. … I was texting with her and just assumed she was on the night relay. There was no doubt in my mind. As someone who’s been there and knows the process, Amanda earned that spot and proved her worth. And she’s someone who’s been there numerous times and has that experience. She won her first (Olympic) medal in 2004 alongside me in Athens.”

Coughlin swam with Weir at the 2004 and 2012 Olympic Games. In 2012, both swimmers raced on the prelims 400 free relay, and neither were chosen for finals – Coughlin had the fastest split, but Lia Neal, who was only two-tenths back despite leading off; and Allison Schmitt, who was a tenth slower than Coughlin, were chosen instead. That relay earned a bronze medal.

On the first morning of competition, Weir led off Team USA’s second-qualifying 400 free relay with a split of 53.60. When adjusted for reaction times, as is the tradition to discourage risky exchanges in prelims, here’s how the “from the blocks” times stacked up:

Those results gave clear indication that Ledecky had earned a spot in the finals to swim alongside Abbey Weitzeil and Simone Manuel, who finished in 1st and 2nd place, respectively, in the 100 free at the 2016 U.S. Olympic Trials.

That left only one spot available – and based on prelims swims, that spot seemed destined for Weir. Instead, the swim went to another American veteran, Dana Vollmer, who happens to train with the same California Aquatics as Coughlin does.

“I was shocked,” Weir said. “I immediately started crying. I was so mad and upset because I really was shocked. I thought if I had gone 54 (seconds) flat or even 54 high, they may put Dana on (the relay), but not with my season best and not being faster than I did at Trials. I was emotional for sure, not angry or disrespectful. That’s not how I operate. … It took awhile to put the pieces together and I still don’t have that much information on (the coaches’) thought process. If you put it down on paper, I can’t make any sense of it.”

“It made me think there’s one of two things going on here,” Weir continued. “One was after the prelims session and maybe Australia didn’t have as great of a race as we thought they were going to. Going into the meet, that was the biggest challenge and on paper we were going to be fighting just to get any medal. After Australia’s swim, maybe they got that taste of gold. If we have the swims of our life, maybe it can happen. I worry that the taste for gold clouded the decisions of the people in charge at the expense of the integrity of our Olympic Trials and why our sport is fair. And with the way everything happened was odd. Nobody came down to my warm-down pool. Normally a coach would come over to me and speak about my race. … None of that happened.

“I never got any feedback from coaches. All eight of them went into a huddle, plus the national team director, and talked for 25 minutes. They never asked me how I felt, if I could go faster. Of course I would have said yes because it was the best-feeling swim I’ve had in 10 years. It makes me think it was already decided a long time ago the way it happened.”

Weir will still receive a silver medal from her prelims swim, and the Americans were about a second away from gold or bronze, so the decision likely didn’t have much impact on the final outcome. Still, there’s a certain honor that comes from actually swimming on the relay in the finals that gets a chance to stand on the podium, and that’s where Weir feels robbed.

One thing that does concern me a lot is the Frank Busch factor in this. I have only positive opinions overall on his leadership, but on this isolated item I find it disturbing there is a might makes right coaches’ meeting over this. Unless I am getting it all wrong, it has been communicated that Busch assembles all 8 coaches for a debate to decide on the relay selections.

So why bother having a head women’s or men’s coach at all? Lastly, why select 6 relay members from Trials? It seems arbitrary now. Why not select 10? 4 are assured and then 6 alternates. Or 12? Then select the final 6 after the training camps. If Simone Manuel or Dana… Read more »

There are no rules. It is up to the coaches discretion…. Soooo

American coaches take the “prelims-only swimmers get medals” rule for granted. They expect that 6-8 swimmers should get a medal for every relay they put up.

Well why wouldn’t they? I’m sure it’s good for team morale to get as many swimmers medals as possible

Tough decisions, and whether at the Olympics or any other meet, hard on the coaches. But in this case, Amada did about the same as she did at trials, but Vollmer’s 100 fly had dropped significantly from trials to the Olympics, and I surmise (and agree) that going with Vollmer was chosen in hopes she could drop a 52+ and put the US in running for the gold ( and of course they needed 52+ from all the others also). The coaches took a shot (with little risk since I think silver was assured) and went for the gold. Vollmer swam well, but did not produce the 52+ they had wished for. I don’t agree that Weir’s 53.6 converts to… Read more »

That is a good take on the matter; looking for upside on a swim from Vollmer.

Since Voller did qualify #6 at trials she had a spot on that relay, albeit in the prelims. But she had a 100 Fly Final that night already. She could have swum the prelims and beat Weir’s split and earned her spot on the relay at night then there weren’t be any complaining from the armchair crowd, but they decided to let her sleep her and rest to finals that night. Makes sense instead of getting up early to have a prelim swim and then possibly 2 more swim in finals. And don’t forget about Voller’s unrested 53.59 from May vs Weir’s 53.60 rested – flat start vs flat start vs rested vs unrested. I can see the logic that… Read more »

To those of you who are siding with Weir and Coughlin, don’t forget that the same stuff is going on on the men’s side. Phelps has consistently replaced people who put up good prelims times. None of them are saying anything about it but it is literally the exact same situation.

If you’re referencing the Conger situation, Lochte replaced Conger, not phelps. Conger split faster than Lochte in both the morning and at night, while Phelps split faster than Conger did. I don’t think Phelps is the one people should be getting mad at

wow- still with this? you are 100% wrong. lochte beat conger in the morning. they take the reaction time out of the splits so that guys don’t get antsy in the AM trying to earn a spot at night. lochte got conger by .13, this has been a thing for a loooong time.

Actually isn’t Amanda’s split even better than Ledecky’s considering she was the lead off?

No. Ledecky was .95 faster than Weir. A good relay start gets a swimmer around 0.6.

Not necessarily… look at Caeleb Dressel. I would say he has a good relay start. But it doesn’t mean he’s .6 faster than flat start.

I could not agree more. Ive been waiting to hear Amanda’s thoughts. The coaches were wrong in putting Dana on it. dont care how it impacted the relay, Amanda earned her spot on the final. The coaches have made other very questionable relay decisions this meet as well.

To read about how the coaches acted towards Amanda is disgusting. Amanda is a class act and was treated with total disrespect.

Agreed. good on Weir for not taking to social media this week, I hope she does in weeks to come however. This could get interesting especially with the $$ implications this article states.

not going to social media doesn’t mean she hasn’t gone public… talking to a reporter for a newspaper is very much going public. i realize it’s 2016, but newspapers are read by people still, sometimes.

Interesting Natalie stated there are no real by-laws about relay selection so it is 100% at the coaches discretion. I feel this gives one or two people too much power. From the daily post article it sounds like Busch and Marsh were proponents for Vollmer. Interesting they went with Vollmer who had a pre-filmed nbc promo which played during finals that entire night.

Lol conspiracies at its finest. Who has the faster time this year? Who has more experience? Who was obvious that they didn’t taper fully for trials? They gave Amanda a chance to prove herself. Yet she didn’t!!!!!! Nuff said.

As much as I feel for Weir, I’m happy for all involve, including Dana. The same issue could be brought up for other U.S. relay’s – but I am glad so far that it hasn’t. It detracts from the Olympics overall. There’s plenty of time to Monday morning quarter back after the Olympics.

Actually, the issue has been brought up for all the other relays. Just read these boards.

But the swimmers in question (Ervin, Conger, Missy, etc) haven’t been the one raising the questions.

the other article on here explains how this is different than the Ervin, Conger, Missy discision