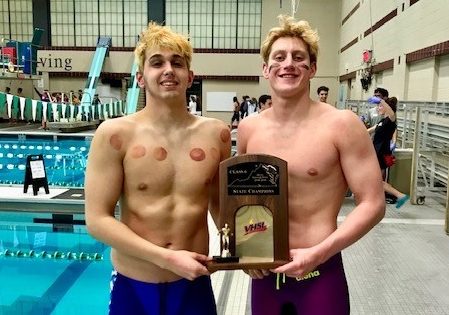 The boy’s 200 IM at the Virginia 6A state championships on Friday night wasn’t the fastest event at the meet. I knew that 200 IM race was something that I would never forget for the rest of my life. Current photo via Andrew Gyenis

The boy’s 200 IM at the Virginia 6A state championships on Friday night wasn’t the fastest event at the meet. It didn’t get the packed crowd at the Jim McKay Natatorium on George Mason University’s campus on its feet like it was for Anthony Grimm’s 19.67 50 free win or Torri Huske’s 51.29 national high school record in the girls’ 100 butterfly. But when I left the pool deck last night as the Oakton boys celebrated their state championship, I knew that 200 IM race was something that I would never forget for the rest of my life.

Nick Highman went into the prelims of the 200 IM on Friday morning as the 9th seed. A senior at Oakton High School, Nick’s goal was to secure a spot in the A-final later that night and pick up crucial points for the Oakton boys’ team in its hunt for the state title. Nick surprised everyone by swimming a lifetime best in the prelims of the 200 IM and qualifying as the first seed for finals. But what the results sheet didn’t show is that Nick swam that time the day after his older brother Daniel Nugent passed away after a six-year battle with a neurodegenerative disease.

Daniel was a member of Oakton’s dive team in high school, and when he graduated from Oakton in 2012, he went on to study at James Madison University in Virginia. Around the end of Daniel’s first semester at James Madison, he started feeling ill with symptoms aligned with mononucleosis, something that’s not uncommon for a freshman in college. But as Daniel came home for winter break, the symptoms continued to worsen and he was unable to return for the start of the spring semester. As weeks turned into months of constant fevers and feeling fatigued, Daniel’s illness took a turn for the worse when he began to lose control of his motor functions. Basic tasks like putting on clothes in the morning or eating breakfast started to become difficult for Daniel, and it became clear to Daniel’s parents and family doctor that this was not a typical case of mono or the flu.

Over the course of the next several years, Daniel’s parents consulted with the top doctors in the world to get answers about the illness that was affecting their son. Daniel’s condition continued to worsen, and he was soon confined to a wheelchair, he began losing the ability to talk, and he started losing weight as eating and drinking became impossible. Doctors tested Daniel for every known illness, but everything came back negative; Daniel’s treatment continued to center around keeping him alive as opposed to working towards a cure. Throughout all of the visits to the doctor, the sleepless nights sitting next to Daniel, and the endless worrying about what the next day would bring, the Highman and Nugent family continued to stay positive and try their best to live a normal life. The Highmans would still host swimmers at their house for breakfast after morning practice, they would volunteer at every opportunity that they got, and they always went out of their way to accommodate friends and family.

Daniel will always be a fighter. There were countless times during the course of the last six years where he could have given up, where the mental toll that at age 24 he was having to be fed through a tube and his airways cleaned of phlegm every hour so that he could keep breathing would have been too much on the average person. He defied every doctor’s expectation. On February 14th, 2019, over six years after he first started feeling sick, Daniel passed away. To this day, his illness remains a medical mystery.

I’m a firm believer that swimming is one of the best sports for teaching athletes life lessons and skills that translate to being successful outside of the pool; skills such as having a competitive drive and a determined work ethic towards an end of season goal stay with swimmers long after their final race. But by far the greatest part of the sport of swimming is the people that you get to meet along the way and the lifelong bonds that are formed beyond the lane lines. Nick Highman and my younger brother, Daniel Gyenis, have been close friends since elementary school, and my family is lucky enough to say that swimming has brought us together with a family as selfless and caring as the Highmans.

I was standing next to Nick’s parents, Mike and Grace Highman, on the pool deck as the A final of the 200 IM dove in on Friday night. From an outsider’s perspective, everything looked normal: Mike was volunteering as an official for the meet and Grace had helped set up the hospitality room for the coaches and volunteers. Nick turned at the halfway point towards the back of the pack, almost three seconds down on the leader. A strong breaststroker, Nick started to work his way through the field on the third 50. Even then, he still started the last lap of freestyle in fourth place. But as the swimmers approached the final flags, the leaders started to tighten up, and Nick put his head down and surged into the wall. A number one showed up next to his name on electronic board, one one-hundredth of a second ahead of the second place finisher. Mike suddenly went silent as he glanced back and forth between the electronic board and the pool, his hands on his head. He stumbled backwards towards the corner of natatorium, not saying anything, just shaking his head in disbelief as tears welled in his eyes.

I cannot begin to fathom the pain that the Highman and Nugent family has had to endure over the course of the last six years, and I wanted to share their story as an appreciation for how positive, kind, and caring they remained in facing the daily struggle of their son’s deteriorating health. As humans, one of our greatest fears in life is the unknown; imagine walking out of those doctor visits time and time again without any concrete answers, without anything to anchor your reasoning to as to why your son keeps getting weaker and weaker. But every time I saw Mike and Grace during the last six years, they always approached me with a smile and a hug, asking about how my job is going, or when my next race is, or how training was going; it was always genuine interest about how I was doing and what I was up to. Nick will be swimming at Lehigh University next year, and Lehigh is lucky to have such a wonderful family join its community.

Daniel will be remembered for his ability to light up a room with his infectious smile and positive attitude. In all of my personal mourning and questioning of why this happened to such a great, young person, it brings me comfort knowing that Daniel has been relieved of the pain and suffering that he has been enduring for the last six years, and that he can get back to cracking jokes and making people laugh. I know that he would be proud of his brother and the rest of the Oakton team for accomplishing their goal of winning the state title.

On behalf of myself, my family, the Oakton high school community, and the broader swim & dive community around the world, we send our condolences to the Highman and Nugent family, and thank you for being an example of how we should all live our lives with greater selflessness and compassion.

in lieu of flowers, the Highman family has asked that people make a donation to support research efforts at the Ataxia Center at Johns Hopkins where they received ongoing care in their attempts to diagnose the cause of Daniel’s disease. 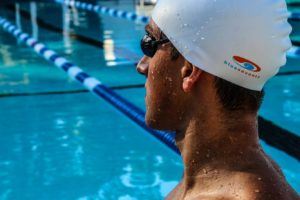 Andrew Gyenis is a graduate of Stanford University, where he studied renewable energy and creative writing. He is a long time competitive swimmer who also spent time racing junior elite triathlons and distance running in high school and spent two years rowing at Stanford.

Since the end of 2014 he has been back to swimming full-time, with a focus on open water and distance races. Since graduation from Stanford in June, 2016, Andrew has been back home in Northern Virginia where he is starting his career in the energy industry and training with Machine Aquatics.

Heart warming, we’re lucky to have such a great community around the sport.

Andrew thank you for sharing this story so beautifully. What Mike, Grace, Daniel and Nick have endured is beyond words. The swim that Nick completed at States was simply amazing but also a testiment to his training and family support through all of this. The Machine Family has been heartbroken by this tragedy but a family we are and we are here for Nick and love the unbreakable bond the Machine brothers have. Congrats to Oakton on an incredible victory. Daniel is beyond proud.. like the rest of us.
D&P