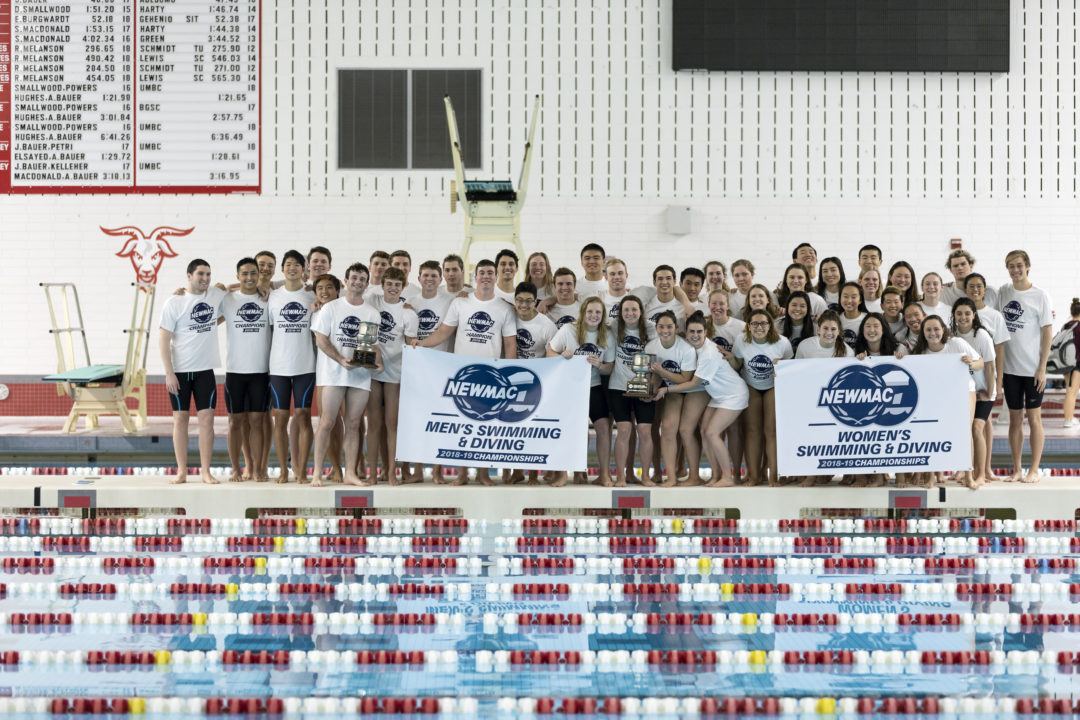 The MIT men won their 11th straight and the MIT women won their 9th straight NEWMAC Conference Championship meet on Sunday night in Worcester, Massachusetts. Both teams were dominant in their respective meets, with the men winning by almost 300 and the women by almost 400.

In spite of rolling their way to team victories, MIT didn’t claim either Swimmer of the Year award at the meet.

The MIT women finished off the final day of competition on Sunday by winning 6 of the 7 events on offer, including three 1-2 finishes.

The MIT men finished the meet with a new D3 National Record in the 100 IM. Junior Bouke Edskes broke the record in 49.67, clearing the 50.37 done by Luis Weekes of Kenyon last week. The event is an official NCAA event, though it’s not contested at D3 nationals. Edskes’ swim on Sunday was a time trial.

For the runner-up Coast Guard men, the star of the meet was sophomore Eric Fuhs. He won the 100 breaststroke in 55.38, which is a time on the bubble of NCAA qualification; and followed that with a victory in the 200 breaststroke in 2:01.90. This marks the 2nd-straight season in which Fuhs has swept those events.

It is important to note, that Jack Bauer’s 100 back split of the winning 400 medley relay (10th in D3) that placed him #1 in D3 (47.64) and took 0.58 seconds off of his previous record. Between smashing both the 100 and 200 back meet/conference records, that gave Bauer an important leg up on some of the other Swimmer of the Meet contenders. I was not involved in the Swimmer of the Meet selection so this is my speculation.