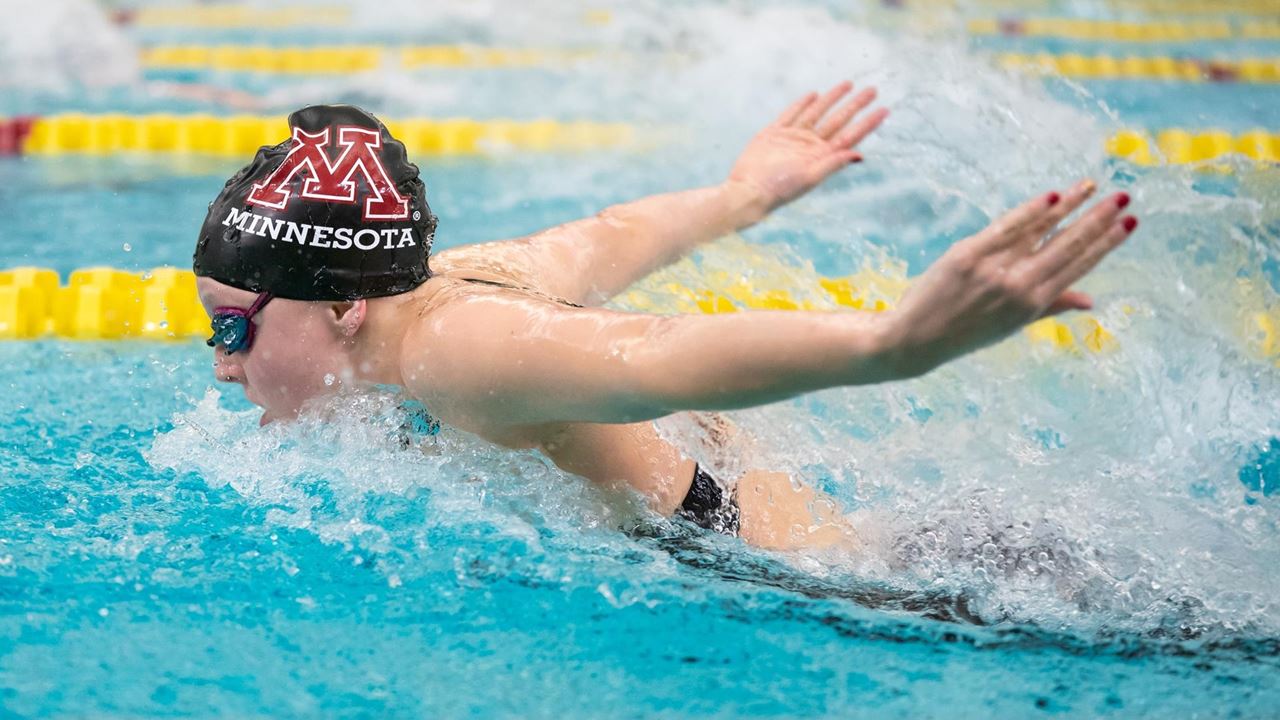 Minnesota defeated Nebraska in its home opener. Sophomore Megan van Berkom swam a lifetime best in the 200 fly, and is now the top-ranked swimmer in the Big Ten this season. Archive photo via Brad Rempel/Minnesota Athletics

Minnesota defeated Nebraska in its women’s home debut meet Friday. This is Minnesota’s second Big Ten victory of the season, while Nebraska has dropped to 1-1 in the conference.

This meet was also the first time this season that the entire Minnesota women’s team was involved in competition, according to head coach Kelly Kramer.

“I’m really pleased,” Minnesota head coach Kelly Kramer said after the Gophers improved to 2-0 on the season. “This was our first chance where we had the entire women’s team involved in competition; I’m just really happy from top to bottom with how we performed today. This is the kind of start to the year that we wanted to have and this is the kind of start that we can build on.”

The Gophers won 10 of the first 11 events, then partially exhibitioned the last five events.

Cornish is one of two women recruits from Canada for the Gophers. Over the summer, she competed at the 2021 Canadian Olympic Trials, where she placed fifth in the 50-meter free with a personal best of 25.64. That time, converted to SCY, would yield a 22.37, enough to place seventh at the 2021 Big Ten Championships. Minnesota so far, though, has kept her from the 50 free, instead having her compete in the 100 back and 100 fly in the dual meet against Iowa and the 100 and 200 free against Nebraska.

Van Berkom, a sophomore swam a new lifetime best in the 200 fly (1:57.11), also earning an NCAA B cut in the process. At the 2021 NCAA women’s championships, Van Berkom finished 44th in the race with a time of 1:59.33. She’s only a sophomore now, so she has lots of time to improve that standing before she graduates. She was also part of the winning 400 free relay with Cornish.

Her time is now the #1-ranked time in the Big Ten this season and the #7 time in the NCAA.

Senior Cook kicked off the meet as the backstroke leg of the 200 medley relay. Cook was joined by junior Lezer, senior Emma Linscott, and junior Summit, and the team posted a time of 1:41.79. Individually, Cook won the 100 back with a time of 54.73. Last season, she placed seventh at the Big Ten women’s championships in the event, with a time of 53.14. She did not swim the event against Iowa.

One of the more impressive wins came from senior Abbey Kilgallon, who debuted her season with a 1000 free time of 10:02.34, over 16 seconds faster than second-place Eliot Kennedy. On the other side, senior Olivia Bloomer defeated Summit by .01 in the 50 free, winning the event with a 23.35.

Nebraska had three individual event winners in the competition against the Gophers.

In the 200 backstroke, senior Madesyn Ronquillio took home the top time of 2:01.27 after overtaking the top two Minnesota swimmers in a close race that relied on Ronquillio’s 30.47 last 50 split. Ronquillio previously made C finals in the event at Big Ten Championships, the only one of the top three finishers at this meet to make finals in that event at all.

Finally, freshman Milica Opacic won the 100 butterfly with a time of 55.07. Though Minnesota exhibitioned some swimmers in that event, Opacic would have won the event even without Minnesota’s exhibitions.

Opacic is a native of Novi Sad, Serbia. She was originally supposed to join the team in 2020, but the COVID-19 pandemic made travel difficult and she delayed her NCAA start to 2021. Opacic was one of Serbia’s top young athletes, winning multiple medals at the 2020 Serbian Long Course Junior Championships, including a silver in the 100-meter fly. Her converted best time of 53.53 in the event would land her in the B-final of the 2021 Big Ten Championships.

The three winners, plus a slew of second and third-place swimmers, weren’t enough for Nebraska to catch up to Minnesota. The two teams will compete later in the weekend, with Nebraska taking on Iowa State on Saturday and Minnesota joining the men’s team to compete against St. Thomas on Saturday, too.